Winter squashes encapsulate the very best flavours of the growing season and can be stored from now until spring, so expand your store cupboard with these versatile plants

Winter squashes make a very welcome addition to the vegetable plot for so many reasons. While squashes may sprawl far and wide as they grow, it means they can be trained up arches to make a decorative feature, or encouraged to cover any spare patches of ground to keep weeds in check. The delicious, densely-fleshed fruits that result display astonishing variety – from neat, round orange, to quirky trumpet-shaped or rugby ball-sized squashes in colours ranging from dark green to red, cream and more.

The winter squash’s name relates to the fruits’ excellent keeping ability. Unlike summer squashes, winter varieties will store from harvest right through to spring, which makes them one of the most versatile of vegetables! Steamed, baked or boiled – a portion of squash will warm the cockles on the gloomiest winter’s day. The rampant, hungry plants do need a long growing season and rich soil to give their best, but they couldn’t be easier to grow and can be left pretty much to their own devices until it’s time to harvest and cure the tasty fruits in autumn.

Winter squashes are among the very greediest crops you can grow. Don’t let this put you off; far from being a hindrance it means plants are almost impossible to over-feed, opening up a raft of unusual growing options. Squashes can, for example, be planted on top of a compost heap and left to trail down. This is an excellent, out-of-the-way option if space is limited on your plot.

The commonest method is to prepare a pit for each squash in March, a couple of months before setting out young plants. Simply dig out a square of soil 40cm deep and wide and half-fill with compost or manure. Fill back with soil, leaving a slight mound, and allow the ground to settle to planting time. Alternatively, fill the hole with a compost caddy’s worth of kitchen scraps before returning the soil. The waste will rot down to feed the plants’ explorative roots later on, ensuring vigorous growth. The only other requirement for these warmth-lovers is as sheltered and sunny a site as you can spare.

Ensure a good crop of fully ripe squashes by sowing early to allow a long growing season. This is second in importance only to diligent site preparation. Sowings can be made under glass or indoors on a warm windowsill. Mid to late April is the time to sow, allowing a month of cosseted growth before the young plants are set out. Seedlings need a temperature range of 15-20°C to germinate effectively. An indoor windowsill won’t require any additional heat but a propagator will be necessary for greenhouse sowings. Sow seeds one per 7cm plastic pot, or into large module trays. Fill pots and trays with seed compost, lay the seeds flat on top then push them down into the compost with your finger. Place them to 1cm deep and cover back over. Give them a water and keep them snug until the sturdy seedlings appear in seven to ten days’ time. After the seedlings have emerged, continue to keep them in a warm, well-lit place and water to keep the compost moist. Once their first set of adult leaves has appeared, pot them on into 12cm pots.

One month after sowing, your young squash plants should be of a decent size and raring to head out into their prepared plot. Only transplant once the danger of any late frost has passed. This is normally around mid-May, though the availability of cloches or fleece to help new transplants along will bring peace of mind. Before planting out, harden plants off for a week by putting them outside for increasingly longer spells, leaving them out overnight in milder weather. A cold frame is a great help in this vital process.

Plant out by excavating a hole in the soil and delicately placing the rootball of your squash into it. Firm into place and give the ground a really thorough watering. A dusting of general fertilizer such as blood, fish and bone, lightly forked into the soil surface, will give plants a boost until their roots reach the goodness of all that locked-up compost or kitchen scraps. Space plants 60-100cm apart, depending on the variety. Don’t be alarmed if they sulk for a few weeks. This is quite common until temperatures pick up and the plants really get away.

When the leaves have turned a deep green you’ll know you have lift off and your plants will rapidly romp away! From this point the sprawling plants need very little care. In particularly hot summers it is worth laying down a mulch of organic material such as lawn clippings, rough compost or even strips of corrugated cardboard to help retain moisture. Leaves rapidly crowd out any patch of bare soil, so weeding is rarely a necessity.

Trailing stems can be trained up supports, lifting plants off the ground and out of the way. This works well but the ultimate yield of fruits may be slightly compromised as the trailing stems will be unable to lay down new roots as they extend. Alternatively, allow the stems to sprawl on the ground, gently encouraging them into unused crannies. If you want extra-large fruits, cover the leaf axes of fruit-bearing stems over with soil or mulch to encourage further rooting and, hence, more resources to draw on. Additional feeding should be unnecessary if the soil has been well prepared.

It is not uncommon to completely lose sight of which plant is which as they intermesh and sprawl into a jungle of stems and leaves. Thankfully, you won’t have to, as all winter squash varieties may simply be left where they are until the leaves yellow and die back in autumn to reveal the fruits beneath. Leaves may become infected with mildew as the weather turns cooler and wetter in September, but this isn’t a concern – the squashes will be unaffected and the leaves can stay in place.

If slugs are a problem, lift squashes off the ground and onto tiles or paving slabs to keep them dry. The fruits will be ready to harvest after the long summer by about mid- to late October. A mild frost won’t damage properly ripe fruits, but leaving them out in the open much longer risks compromising their storage potential. 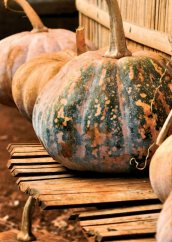 Winter squashes are one of the most useful vegetables on the plot thanks to their tough outer skin that gifts them with phenomenal storage ability. Prepared and stored correctly, there’s no reason a squash harvested in autumn shouldn’t keep until spring, offering a welcome source of warming goodness right through the colder months.

The secret lies in making sure squashes are fully cured before storing – simply hardening off the outer skin to protect the flesh within. Squashes should naturally cure outdoors in the early autumn sunshine, but if a particularly wet and cool spell develops, harvest the squashes a little earlier, say early October, and bring them under cover to finish off. A well-ventilated greenhouse or conservatory would be ideal. Eat up any that remain soft by November and keep the rest. Unlike other vegetables, winter squashes can store up to a cool room temperature. Anywhere from a frost-free shed to an unheated spare room would make a suitable winter store. The longest-lasting fruits will keep until early April.

You may have heard of spaghetti squash but is it really a viable substitute to carb-heavy pasta? The short answer is a delicious yes! Also known as vegetable spaghetti, this type of squash is much like any other winter squash. Raw, it has the same dense texture but when cooked the oblong fruits come into their own as the flesh falls away in spaghetti-like strands. You can boil, bake or microwave your spaghetti squash until it softens up. Once cooked, comb away the flesh using a fork, dragging from the stalk end down. Serve just like pasta with a sauce of your choice – a home-made passata made from the last of the summer tomatoes would be sublime!

Spaghetti squashes have lots of seeds. Make the most of them by roasting them in the oven with a sprinkling of chilli flakes and rock salt for a nutritious snack. There are a number of spaghetti squash varieties available, ranging in colour from pale cream to yellow, orange and green. Look out for varieties such as ‘Hasta La Pasta’ or the pretty, yellow-orange striped ‘Pyjama’. 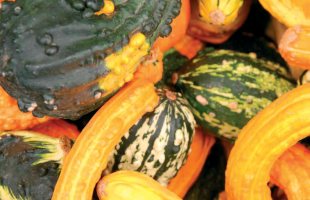