There's nothing quite like the taste of freshly-picked tomatoes and the good news is anyone can grow them. Anthony Bennett explains how to choose the varieties most suitable for you

The tomato is a much-loved fixture on UK plots and it isn’t hard to see why. The plants are easy to get going, quick to reach maturity and once they start producing their flavoursome fruits there’s no stopping them! There is a variety to fit every space: compact cherry tomatoes for hanging baskets by the front door; vigorous-growing vine toms for both greenhouse and outdoor cultivation in pots, grow bags or in the ground. There are even succulent, meaty plum and beefsteak types on stocky, bush-like plants that need little support – making them great for busy gardeners looking for a low-maintenance variety. They’re even attractive enough to be a slotted into an ornamental plot or grown next to a flower bed.

Tomatoes originated from a warm area of South America before they were introduced to southern Europe. Few crops have been developed over the years to give such a range of habits, flavours and colours as these delicious, exotic fruits. There are literally hundreds of different varieties of tomato to try, giving rise to many devotees to this well-travelled fruiting plant. As well as standard red toms, you can sink your teeth into yellow, striped, near-black and creamcoloured ones too. You’ll find that biting into a delicious homegrown tom is a million miles away from eating supermarket tomatoes, which are bred for shelf-life and uniformity rather than flavour. F1 hybrid tomato seed promises outstanding performance, often combining vigour, taste and disease resistance to give troublefree crops. But it is also worth seeking out the older, heirloom varieties, which will let you enjoy many old favourites that you wouldn’t run into in the shops.

Tomatoes thrive in a sheltered, sunny position. All varieties can be grown under the cover of a greenhouse or polytunnel but many are also suitable for outdoor cultivation so long as these growing requirements are met. Look out for those varieties described as suitable for outdoor growing or pick an old, reliable favourite such as ‘Shirley’ or the appropriately named ‘Outdoor Girl’. If growing in the soil outside, pick a spot where tomatoes or potatoes have not been sited within the past two years to reduce the chances of cropspecific pests and diseases, such as late blight, passing on to the new crop. Prepare the soil by digging it over and incorporating plenty of well-rotted organic matter such as home-made compost. Tomatoes perform best when given a nutrient-rich soil, so early preparations will go a long way to ensuring the best possible yields. Rake the soil level a week before planting, ready for your new occupants.

Greenhouse-grown tomatoes will stand the best chance of success if they are introduced into a clean, sterile environment that’s free of overwintering pests so thoroughly clean all nooks and crannies within your greenhouse the winter before. Greenhouse growing allows an earlier start and will extend the season, meaning you’ll be left with more fruit. Plants can be grown in greenhouse beds or planted into pots or grow bags.

Tomato plants are ready to move into their final positions approximately seven to eight weeks after sowing. Work back from the usual date of your last frost – the end of May in the Midlands – and sow accordingly. This means sowing from the start of April for outdoor plants, but sowings can be made even earlier in March or late February for tomatoes that are to be grown in the greenhouse, or in milder parts of the southwest.

Sow seeds into 7cm pots of seed compost. Fill pots up to within 1cm of the rim and gently pat the surface down. Water the pots thoroughly and allow them to drain, before spacing individual seeds at least 2cm apart. Cover seeds over with a 0.5cm layer of sieved seed compost or vermiculite and lightly water in using a watering can fitted with a fine rose. Move the pots to a propagator to germinate, or place a clear polythene bag over the tops of individual pots held away from the compost with sticks and secured in place using an elastic band. Tomatoes will germinate quickly at a temperature of around 20°C, so the top of a warm indoor window sill is ideal. Similarly a snug, warm airing cupboard can be a good environment, but check the pots daily for signs of growth and remove them as soon as germination occurs.

Seedlings should break free of the compost surface within 10 days – often sooner. At this stage they should be removed from the propagator and placed in a bright position indoors. Only water the seedlings once the compost begins to dry – they will be fine for the first week or so.

When the first adult leaves are just visible it is time to prick out your seedlings into separate 7cm pots. Fill the pots with multipurpose compost, firm gently, water well and leave overnight in the growing on area to raise the compost temperature (this deters damping off disease). Very carefully tease out seedlings from their germination pot – sliding the seed compost out of the pot to get at the young seedlings is the easiest way of doing this and will leave roots intact. Dibble holes into the new pots using a pencil and, holding each seedling by its leaves, lower the roots into the hole before feeding back with compost.

Grow the seedlings on a sunny window sill or in the greenhouse, taking care to avoid any draughts and cold nights. If roots appear at the base of the pot before it is time to plant them out then pot them on again into a 12cm pot. The young plants can go outside as soon as the danger of frost has passed – at this point they should be about 15cm tall. Begin hardening off plants a week or two beforehand by leaving them outside in their new positions during the day, and bringing them back undercover at night.

To plant outside or within the greenhouse border dig a hole larger than the rootball. Remove the plants from their pot and then place them into the holes, feeding back the soil around the roots and firming gently. Water the plants in well and position a sturdy, strong cane or pole next to each one. Space tomatoes at least 45cm apart so they have plenty of room and so that fresh air can circulate around them. Tomatoes can be grown in pots so long as these are at least 23cm across. Grow bags are a hugely popular and straightforward way of growing them – plant as instructed but be sure to break up any clods of compost before cutting out your planting holes in the top of the bag and drainage slits in the bottom. Choose a generously proportioned grow bag – the extra money it costs will be paid back many times over by the number of fruits you’ll pick.

As soon as the first flower trusses appear begin feeding plants regularly using an organic liquid tomato feed that is high in potash to encourage further flowering and fruiting. Allow up to six trusses to form on greenhouse cordon tomatoes or four on outdoor tomatoes; as soon as this number is reached pinch out the tops of plants. Tie in cordons as they grow onto their supports and pinch out sideshoots that form where leaf stalks join the main stem. If sideshoots are left to grow they will form a new branch, drawing energy away from fruit formation.

Bush types of tomato form flowers and fruits at the end of each branch so do not require any tying in or removal of sideshoots. This makes them an attractive choice for time-poor gardeners! Some support can be given, though, to prevent plants sagging under the weight of their fruits.

All tomatoes will need to be kept moist so that they grow steadily. This is particularly important once fruits begin to form, as sudden swings between bone-dry soil and moist conditions can cause rapid fruit-swell, forcing the skins to split open. Watering can be made a lot easier by sinking empty plant pots or inverted plastic drinks bottles cut in half into the soil right next to the base of the plant; pour your water and liquid feed into this to allow it to seep gradually into the soil or compost. Tomatoes can also be grown in bottomless pots positioned on top of grow bags or soil. The extra space leads to sturdier plants.

Guard against whitefly, a common flying pest of tomatoes, by dotting brightly coloured French marigolds in-between plants. Their scent is thought to keep the flies at bay. Biological controls, such as the parasitic wasp Encarsia formosa, may also be used in an enclosed greenhouse environment. When introduced they attack the nymphs (the insects’ scale-like offspring), turning them black.

The first tomatoes will be ready from early July and with regular picking there’s every chance you could be enjoying the fruits right up until the first frosts. Cut complete trusses of vine-ripening varieties using secateurs or hand-pick individual tomatoes. Avoid placing them in the fridge, as this will dampen their aroma and flavour. Regular liquid feeding will give your tomatoes the best possible taste – so don’t scrimp on this during the growing season – but at the same time, don’t overdo it!

It is more than likely that some fruits will still be hanging around at the end of the season. Under-ripe fruits can be brought inside and placed into a brown paper bag with a ripe banana. The banana emits ethylene gas, which hastens ripening in the tomatoes. Excess ripe tomatoes can be turned into a home-made tomato sauce, which may then be frozen in batches for use during the winter months. Surplus green tomatoes can be made into chutney. 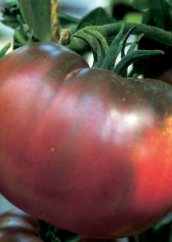 Like their relative the potato, tomatoes can be affected by blight in warm, wet weather. Tomato blight is caused by the fungus Phytophthora infestans and is spread by water droplets. Symptoms include soft, brown patches which can appear on both the fruits and foliage. These rapidly spread, causing fruits to shrivel and eventually rot. The fungus is more likely to appear on outdoor-grown toms than those in a greenhouse, but even indoors it can strike in excessively moist conditions.

If blight strikes you may be able to halt its development by removing the infected parts and then spraying the plants every two weeks with Bordeaux mixture. Prevention is better than cure, of course, so make sure plants have plenty of air circulating around them and are not overcrowded. Try to avoid watering last thing in the evening, when the moist soil or foliage can combine with warm summer nights to provide the perfect conditions for an attack of blight. If plants are badly affected they will have to be burned, not composted. Where blight has reared its ugly head in the past, consider growing a blight-resistant variety such as ‘Ferline’ or ‘Legend’ (available from Thompson & Morgan 0844 248 5383, thompson-morgan.com).

No wonder Mediterraneans look so healthy – their tomato-heavy diet may have something to do with it. Tomatoes are chock full of vitamins C and A, potassium and iron. It is lycopene, however, that is the real health-booster of these tasty fruits.

Lycopene is the red pigment that gives the tomato its distinctive, rosy glow. This antioxidant can mop up the potentially harmful free radicals that are a major source of cancers. Cooking tomatoes boosts the availability of lycopene.

The biggest health benefits will be had from tomatoes with the deepest red colour, as these contain the most lycopene. ‘Black’ tomatoes are a very dark red and are the highest in lycopene, so pick a variety with fruits described as such. The beefsteak ‘Black Russian’ can be sliced into salads to give it a vitamin boost. 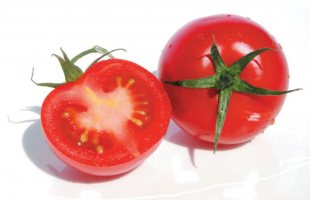