Worried that springtime means a bare plot and a reluctant reliance on the shops? Sprouting broccoli crops from February to May and although it's one of the priciest shop-bought veg, the seeds are as cheap as any other

You can sow sprouting broccoli from mid-April to mid-May – towards the start of that window for early varieties and the end of it for late ones. This should ideally be in either an outdoor seedbed (to transplant partially-grown plants to the plot proper later on – saving space on it for now) or in trays or pots under cover.

If you’re sowing in a seedbed, bear in mind local weather conditions – if it is still cold and wet in April, then you’re best off waiting a few weeks to give your seeds and seedlings the best chance of success. The soil should be dry enough to rake level without clinging to the soles of your boots, a process during which you should also remove any stones or weeds. Create seed drills in the soil using the corner of a hoe or a garden cane: they should be 1–1.5cm deep and spaced 20cm apart. Sow the seeds thinly along them. Once these have germinated, which will take about 10 days, remove excess seedlings in stages to leave final spacings of 7cm between each plant.

However, the seedbed option will leave the plants exposed to damage from flea beetles and pigeons – common nuisances for brassicas growers. Covering over the young plants with horticultural fleece will overcome the problem – the material lets through rain and sunshine but will keep both pests at bay (as well as many other troublesome insects). The alternative is to sow the seeds so they can be completely protected until transplanting time, either by a greenhouse, polytunnel or cold frame. This can be in seed trays or pots, carefully ‘pricking out’ the seedlings into individual 7cm pots of multipurpose compost as soon as they have germinated.

At all stages of the sowing process, keep the soil or compost moist to hasten germination and ensure steady growth. Water both before and after sowing, and keep moisture levels topped up by watering along rows or trays using a watering can fitted with a fine rose end.

Sprouting broccoli does best in good, firm soil in a sunny position – though it copes with some shade. Make sure the earth is as rich as possible: ideally plenty of organic matter, such as compost or well-rotted manure, will have been dug into the soil the previous autumn. Alternatively, if you operate a no-dig system, you will have spread the organic matter over the soil surface and left it to break down over winter.

Pick a spot that hasn’t had other brassica crops grown on it for at least two years and is sheltered from the worst of the wind. As the plants will be in the ground for a lengthy stint from summer through to the following spring, it is important the site won’t get waterlogged, even in winter. Excessively wet soil can cause the roots to rot.

Start your broccoli off this month and next in an outdoor seedbed or in seed trays or pots kept in a greenhouse or cold frame. This means they can directly follow an earlier-harvested crop when they are transplanted to their final bed in June or July. Once there’s enough space for your young broccoli plants, sprinkle of organic fertiliser to the soil, such as chicken manure pellets, to provide an extra nutrient boost. Wait a couple of weeks before transplanting.

You should continue to keep plants carefully watered as they go through their seedling stage and, if necessary, weed between the rows on the seedbed, lightly hoeing off annual weeds as they appear.

The plants will be ready to move to their ultimate growing positions as soon as they have reached 10–15cm in height. This will be anytime between June and July, depending on when you sowed the seeds and what the spring weather is like. Gently knock plants out of their pots or dig them up from your seedbed using a trowel. Re-plant them leaving about 60cm between them within each row and the same distance between rows.

Set the plants a little deeper than they were before to give them added support. Firm them in well and, as a precaution, fit protective discs around the base of the stem to guard against cabbage root fly, which lay their eggs in the soil at this point. Discs can be bought from any garden centre or you can make your own from roofing felt by cutting out circles and scoring through to the centre of the disc so it can be fitted around your plants.

Sprouting broccoli is easy to take care of once it has been transplanted. You will need to keep plants well watered immediately after transplanting while they find their feet, and again in any spells of dry weather. As with growing them in a seedbed, you may want to consider covering new transplants with fleece to keep pests off your crop.

Regularly weed between rows with a hoe. The disturbance of the soil will also disrupt a number of troublesome insect pests (which can then be hoovered up by garden birds if you haven’t opted for netting). A layer of mulch can be of use in stopping weeds in their tracks and will also lock moisture into the soil. Single sheets of cardboard or layers of newspaper with grass clippings spread over the top are a good, cheap substitute if you don’t have enough compost or rotted manure to go round. As winter approaches, plants may need a little extra support if they begin to rock about in the wind. Support individuals with canes or hammer in stakes into the ground at the four corners of each row and stretch string between them to hem the plants in. Any plants that have become loose should be firmed back in. You must also pick off any yellow leaves as they appear – they can become a breeding ground for disease as they rot.

The first harvest is always a keenly anticipated moment and no doubt you will have been eyeing the immature spears a few weeks beforehand. Expect to cut away the first spears from late winter – taking about 10–12cm of stalk with each one. It is important to take the central spear first as this will cause further development on the rest of the plant. Don’t wait until the flower buds have opened as the crop won’t be as tasty and it will also send a signal to the plant to stop producing new flower spears.

By growing an early variety alongside a late one there’s a good chance you should be able to carry on enjoying the succulent beauties until May. Like all vegetables, the spears are best harvested within an hour or so of cooking but they will store for a week in the fridge. They are also good candidates for home freezing – blanch them in salted, boiling water for three minutes, plunge them into cold water to stop them cooking, drain them off, then bag the spears up into polythene bags to freeze. 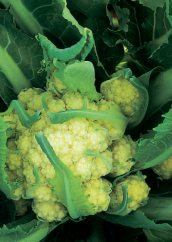 Triple Your Haul Of Sprouting Broccoli

Low-maintenance perennial vegetables that provide a crop year after year will always prove to be a valuable inclusion on an allotment or kitchen garden. Perennial broccoli is one such example and, given the right conditions, the plants will yield a crop for up to three years in a row – a fantastic result from a single sowing.

The hardy variety ‘Nine Star Perennial’ is the one to watch out for. It is started off in the usual way but grows very vigorously, so you need to allow for wider spacings between plants. Leave 90cm between each one in every direction – in a row against a fence is a good, out-ofthe- way method of growing them to stop them taking up too much room. At the end of spring, you will be able to harvest several heads of creamy-white florets atop delicious green spears. As long as each of these is harvested in good time – so that they don’t get the chance to fully flower and set seed – the plant will continue to the next year and you can do the same again then. Give the plants a boost each spring by raking in a top dressing of chicken manure pellets and then in summer apply a mulch of organic matter. ‘Nine Star Perennial’ seeds are available from Thompson & Morgan, 01473 695 200, thompson-morgan.com

Sprouting broccoli offers a melt-in-the-mouth experience at a time when few other crops are ready and stored vegetables may be running low. Calabrese (the green ‘broccoli’ sold in shops), meanwhile, will complete its lifecycle in one season, occupying the ground for a much shorter period of time. Between the two they have the potential to provide an almost year-round supply of spears.

Calabrese is grown in almost exactly the same way as sprouting broccoli. The main difference is that you’ll need to sow a month earlier, from mid-March to April, and you can space the plants a little closer: 50cm between plants and 60cm between rows. Calabrese is less prone to wind rock because it is out of the ground by mid-autumn when the stormier weather arrives. Cut the stalks just above a pair of side shoots, as these will go on to produce further heads. Good varieties to try include very quick-to-mature ‘Green Comet’ and reliable ‘Fiesta’ (seeds for both are available from Seeds by Size, 01442 251 458 seeds-by-size.co.uk). 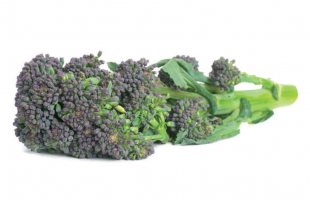