If you think you don’t like runner beans, chances are you have only tried the supermarket-bought versions, which tend to be tough, stringy, and have simply been sitting around too long. Once you’ve grown your own and tasted them young and fresh, you’ll see why rows of their attractive parent plants remain such a common sight in veg gardens and on allotments.

Runner beans have a real zeal for life – they’ll climb up just about anything if you let them. And so long as the sun’s shining, the soil is decent and there’s enough water available for them to sate their thirst, you’ll be able to fill your belly with tender pods from late July sometimes right through to October. A 3m (10’) double row of these prolific plants could provide you with around 30kg (65lb) of mouth-watering pods before the season’s out.

And that’s not all – a few rows of runner beans will provide a dazzling display of blooms, with red, white, or pink flowers appearing where each fruit will (hopefully) be about to push through. The dense displays can form an attractive screen, or you can grow your plants up bamboo cane wigwams for a brightly-coloured focal point on your patch.

If you can provide a soil that’s loaded with plenty of moisture-retaining compost and keep things well-watered, these admittedly thirsty plants should present a heavy and healthy crop of succulent pods. They’ll tolerate partial shade, but much prefer full sun. If you don’t fancy picking the tall plants up after every gust of wind, find a sheltered spot to grow them – this will also mean pollinating and other beneficial insects will be more likely to take up residence nearby. Runner beans extract nitrogen from the air, so avoid adding more into your soil (by using fertiliser which lean heavily on this element, for example). Doing so is likely to result in leafy growth and discourage fruiting.

You’ll need to dig a deep, well-manured bed for your plants to encourage maximum root development (though some varieties, such as ‘Hestia’, can be grown in large tubs of multipurpose compost). A couple of months before sowing, prepare a 45cm (18”) trench for the crop. Strip away the top layer of soil and fork in a generous amount of rotted compost or manure, to a depth of around 15cm (6”). Mark the centre of each end of the trench (otherwise you won’t know where to sow) and replace the topsoil. If there’s any left over, you can build it up along the side of each row to make a mini-reservoir for retaining water.

Scarlet runners (so-named because most common varieties carry vibrant red blooms) are best sown outdoors in late spring or early summer, a week before the last frost (if you’re growing under cloches, you can sow them about a month earlier).

You’ll need to erect a support structure for your plants before you set about sowing. Cane wigwams are particularly attractive, and are perennial favourites on the allotment. If you’d rather grow in traditional rows, try erecting two lines of poles (or more if you can afford the room) around 45cm (18î) apart. Set them in facing pairs, angled so adjacent canes have a 30cm (1’) gap at the bottom and cross over higher up – near the middle is good, as it makes picking easier. For additional support, lay an extra cane across the sets of poles, so it sits in the crook where they cross. Alternatively you can also opt for a maypole system – drive a tall central stake, about 2.5m (8’) in height, into the ground. Run strings from the top to pegs hammered into the soil about 60cm (2’) from the base and similarly spaced apart from other pegs.

Whichever method you choose, it’s best to sow two seeds 5cm (2î) deep beneath the foot of each pole or string. You can also grow your beans up single rows of netting stapled to timber uprights at 90cm (3’) spacings. With this method, sow the seeds at 30cm (1’) intervals along the net.

Caring for your runner beans shouldn’t be too much of a chore. Some thinning will probably be in order after about three weeks – if both seedlings go on to germinate, remove the weaker of the two (use surplus seedlings to fill gaps where neither does). Loosely tie the plants to their support initially – after that they should take hold of the string or cane and climb naturally.

The most important thing you can do after that is to be vigilant with your watering. This is particularly vital once the flowers appear – at this stage, you should never let the soil dry out completely. To aid moisture retention, it’s worth adding a thick mulch of compost, lawn clippings or similar organic material over the wet ground. This will have the added benefit of keeping weeds down and gently feeding the plants. If any dry spells occur during flowering, you should spray the plants daily with water, preferably in the evening to avoid scorching the leaves. This process – known as ‘misting’ – increases humidity and can help to improve pollination, which should mean the flowers set pods more readily.

Climbing runner beans grow tall – they’ll happily rise to 1.8m (6’) and sometimes even higher. Pinch out the growing tips when the plants reach the tops of their support poles or netting. This will direct energy into forming sideshoots, and will also stop the heads of the plants tangling together. After harvesting, you can cut down the stems and leave the roots in the ground – they will release nitrogen into the soil, which could be helpful if you’re planning to grow other vegetables over winter as it’s needed to produce leafy growth. If any plants regrow from these roots, just remove them – they’re likely to be weak and unproductive.

Given enough hand watering, there isn’t too much to do when it comes to looking after your runner bean plants. But you should be on the lookout for any seasonal pests or diseases. In the early stages of growth, stay vigilant for signs of bean seed fly – their tiny white grubs eat into seeds and young stems, and can cause seedlings to fail. Traditionally, the best way to deal with an infestation was to dust the drills with derris powder – but what was once considered a natural pesticide (it’s derived from plant extracts) has been found to be toxic and a ban is imminent. Instead, use a fleece covering to protect young plants (this will also boost growth by warming the seedlings), switching to better-ventilated mesh as summer wears on, to ensure they stay protected but don’t overheat.

Of course, planting to attract predatory insects – such as yarrows for ladybirds – will help fight off unwanted visitors. Slugs and snails may also attack young shoots – keep an eye out for holes and tell-tale slime trails, especially first thing in the morning (these critters are most active at night). There are plenty of organic ways to deter slugs and snails – try surrounding the plant with a continuous circle of crushed eggshells, or adding grit to your mulch – as they won’t fancy slithering over either of those sharp surfaces.

There are several diseases to look out for – foot rot, bean rust and mildew are among the most common. An otherwise healthy plant should grow out of the latter if you keep it well mulched and watered, but remove any badlyaffected areas. Bean rust, identified by white spots that later turn rusty brown, is a fungal disease. It usually occurs too late in the season to do any significant damage, but you should remove any plants that have been struck down to minimise the risk of it spreading. You can spot foot rot by checking the stem bases – if they’ve gone black and begun to rot, your plant is probably being attacked by this fungal infection. There’s no remedy, so prevention is essential – making sure you’re rotating your crops effectively is a good first step.

Runner beans are best picked while they’re still young and tender – before the seeds begin to swell inside their pods and things start to get a little stringy. They’ll usually be around 15–20cm (6–8”) in length when it’s time to pluck them from the plant. The plants are heavy croppers, so try your best to keep on top of harvesting (every couple of days should be fine). The more you pick, the more pods will be produced, and the longer the cropping season will last – it can be as long as eight weeks. You can always give some away to friends and neighbours if there’s too much for your own consumption. If you do spot any large beans you’ve previously missed, remove them to encourage new growth. If you let too many reach maturity, the plants will stop flowering and no more pods will be set.

It’s best to use your runner beans immediately after picking – wash them thoroughly, trim the tops and tails and peel off any stringy edges down the sides of the pod. Cut them into 2.5–5cm (1–2”) chunks and boil for about five to seven minutes (a little longer if you suspect they’re on the old side), then serve straight away with a knob of butter. Those big, older beans can be used, too – just discard the outer husk and cook the seeds inside as you would shelled broad beans. 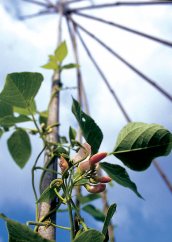 Runner beans grown on wigwams can make an eye-catching feature on the plot. To construct a suitable structure, grab five or six straight canes – all the same size, at least 1.5m (5’) tall – and tie them together firmly at the top using garden twine. Spread out the other ends to form a circular shape at the base, keeping the distances between each one reasonably even, at least 30cm (1’) apart. Push the canes firmly into the ground, before twisting some gardening twine around the length of each one – this will give the plants more to grab on to. Sow the runner bean seeds at the bottom of each pole. As the shoots emerge and lengthen, gently tease them around the canes until they start to wrap themselves round of their own accord.

Dwarf runner beans may not be quite as succulent as their taller cousins, but they’re great varieties to grow if you’re a little short on space – or simply want to pack as many plants into your plot as possible by sticking containers in every nook and cranny of your plot! If you’re growing in pots, they’ll need to be fairly large – at least 30cm (1’) both in depth and diameter. Remember that the plants may still need some support, as they can grow up to 60cm (2’) in height. Alternatively, you can try growing them in hanging baskets for a cascade of flowers. An easy variety to start with is ‘Hestia’ – it’s a diseaseresistant, early-cropper that develops attractive bicolour blooms which can look fantastic as part of a flower garden. 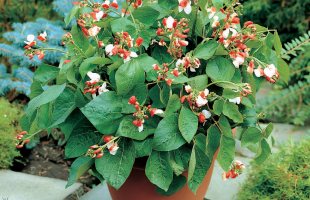