Scooping out a Jack-O'-Lantern can leave you with the main ingredient for a delicious bread, soup or stew. Anthony Bennett explains how home-growers can keep enjoying these tasty recipes long after Halowe'en is over

With their oversized leaves and chunky fruits, pumpkins and winter squashes are the giants of the veg patch. After planting they grow at break-neck speed and given a sunny spot the fruits can be left to swell with minimal fuss. They come in all colours and weird and wonderful shapes, making this an excellent crop to try with children. Or why not have a pumpkin competition and see how large they will grow before next Halowe’en?

Pumpkins and squashes are members of the curcurbit family, the same group as marrows and courgettes. Some grow as bushes, while other have a more sprawling habit and snake around the veg patch. Trailing varieties can be trained onto supports, while some bush types are suitable for growing in a container, making them ideal for small plots.

The key to success with these delicious veg is plenty of sunshine and thoroughly enriched, moist soil. Fruits can be left to ripen on the plant, so there’s no guesswork as to when to cut them. Once they mature they can be cured and their skins will toughen up to keep the sweet, tasty flesh inside ready to eat right through the winter. You won’t even need sacks, nets or boxes to keep the veg on hand, as they can easily be stored in an unheated spare room.

Winter squashes and pumpkins are rampant feeders so your chances of success will be greatly increased if your soil is well prepared before planting.

Pick a sunny, sheltered position for your plants and dig over the soil at least a month beforehand. Incorporate plenty of well-rotted organic matter at this point; it’s fairly hard to over-feed squashes and pumpkins, so the more added to their growing area the better. Plants may even be set onto the top of compost heaps where the endless supply of nutrients and the raised position will leave you with exceptional results. Alternatively, you can prepare planting pockets. Dig a hole 30cm deep and wide and add a 5-10cm layer of compost or part-rotted compostable material to the bottom. Back-fill the hole using soil which has been enriched with more organic matter to leave a slight mound at the surface. Mark the centre of each pocket with a bamboo garden cane so you know where to plant and allow the earth to settle down for a few weeks.

The young plants should be planted out during the first month of spring, or as soon as the danger of frost has passed in your area – this can be as soon as early May in the south west and as late as mid-June in some parts of Scotland. Newly positioned squashes and pumpkins can take a while to adjust but you will be able to minimise any poor reactions by placing covers over the ground a few weeks before planting out time. This will heat up the soil to make conditions more favourable for the warmth-loving veg.

Both pumpkins and winter squashes may be sown inside into pots for planting out later, or outside directly into their final growing positions. The latter technique will reduce disturbances to the seedlings but sowing the seeds indoors will give the plants a full month’s head start – an important consideration if a wet and cloudy summer should strike.

Sow seeds individually into large modules filled with multipurpose compost. Push them into the growing medium on their sides until they sit about 1cm deep. Cover them over with more compost, water well and then label them according to variety before placing your modules into a propagator. The seeds will need temperatures of between about 15- 20°C to germinate, so even if you do not have a propagator starting them off on a warm, indoor window sill can achieve a good result. Seedlings won’t necessarily emerge from the compost at the same time – most will appear within a week but others may need as much as a fortnight.

If starting seeds off outdoors, space their sowing stations 60cm apart for bush varieties and 90-120cm apart for trailing squash plants. Sow two to three seeds together and 1-2cm deep in every growing position. Water them and then cover each seed station with a cloche or clear glass jar to create a warm, humid micro-climate. Thin the resulting seedlings to leave a single, strong plant at each spacing.

Seedlings that have been started off indoors will need potting on into a larger container as soon as their roots have reached the bottom of the module and they have developed an adult leaf. Carefully push them out and plant them in 12cm pots of multipurpose compost. Keep them in a warm and sunny position as they grow on. The young plants will be ready to transfer outside by late May. Harden them off a week or so before this by leaving the pots outside for progressively longer spells each day so they can adapt to the change in temperature. This helps to lessen the shock of any poor weather that may occur soon after planting out.

To transfer the squashes or pumpkins to their final growing positions, dig a hole into the prepared ground or at the top of your planting pockets and firm in the young plants. It’s likely that they’ll need a few weeks to adapt to their new placings but a decent warm spell should help them pick up. You’ll know they are thriving when the leaves take on a dark green colour and their growth rate increases. To reduce the shock, cover plants over with a layer or two of horticultural fleece for a few weeks. This is not essential but helps a great deal and will ultimately speed the time until harvest. Outdoor-sown seedlings should have their protective cloche or jar removed as soon as the weather improves.

Trailing varieties can be trained or tied onto upright supports or archways to create a decorative feature. You will get fewer fruits this way, as trailing stems will be unable to root into the ground, but the space-saving technique may be worth the compromise.

There’s a fine balance between over-watering in the early stages and then not watering enough once plants are growing at full speed. Over-irrigating when plants are young may lead to rotting but as soon as their growth speeds up they will need to be kept consistently moist, particularly in hot weather when evaporation rates are high. Damp soil will encourage large fruits so water freely until late August, when irrigation should be reduced.

Applying a layer of mulch to the soil will have two effects: locking in moisture and supplying an additional source of nutrients. Any organic material can be used to cover the soil, from rough compost to grass clippings over layers of cardboard or part-rotted leaves. Trailing varieties of pumpkin and squash will form new roots wherever the stem touches the ground and will push through into the mulch to draw additional strength. Pinch out trailing stems as soon as they reach 60cm to encourage a more compact plant. In most cases weeds shouldn’t be a problem but any large, unwanted perennials should be dug out with a trowel as they appear.

Additional feeding should not be necessary but a liquid feed that is high in potash, such as that applied to tomatoes, may prove an advantage on sandy soils where nutrients can quickly be washed through by heavy rain. This can be applied at watering time, from when the first fruits have set up until late summer. Most pumpkins and winter squashes are then left to ripen on the plant and are picked in autumn once they have fully matured.

Pumpkins and winter squashes will store well into winter. However, the first fruits may be formed as soon as 12 weeks after sowing. These can be cut from the plant while the skin is still soft and enjoyed as summer squashes, sliced up into stir-fries, boiled or roasted and added to risottos.

If you plan to keep your pumpkins and squashes for storage you will need to leave the fruits on the plant until at least October. This will help their skins to harden ready for storage. If slugs are prevalent on your patch then keep the developing and maturing fruits above the soil by slipping a square of tiling, or a similar material, beneath each fruit for it to rest on. Raising fruits off the ground will also help to prevent them from spoiling or rotting by avoiding contact with the damp soil. 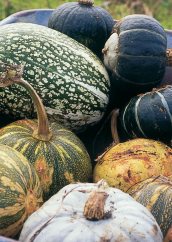 Fresh vegetables can be in short supply during the winter months, so anything that can be stored for use during this lean time is welcome. This is precisely where pumpkins and winter squashes come into play. Carefully cured, a sound squash should keep until February and in ideal conditions will last right up until April when next season’s crop is sown.

For storing over winter leave all of the fruits on the plants as the leaves die away. By September it is normal for the foliage to be yellowed and suffering from mildew. By October the leaves will have died back completely, exposing the pumpkins or squashes to the early autumn sun. They should be left outside as late as possible then brought under cover before the first frost arrives. Once indoors, the fruits should be spaced out to dry for another few weeks to allow the skin to turn completely hard and seal the flesh safely inside. Fruits can be kept at or just below room temperature and unlike many other winterstored vegetables they will keep well in these relatively warm conditions. Just place them in a spare, unheated bedroom or utility room. 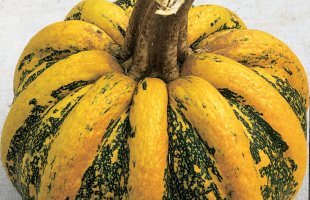