Sun-loving fennel offers an explosion of aniseed to many dishes. If you've a warm, sheltered spot then you will want to make room for this gourmet crop

For those who love good food there is one crop that mustn’t be overlooked. Fennel imparts its aniseed flavour to many fish dishes, chicken recipes, stuffings and salads, and is available as either a herb (herb fennel) or a bulb-like vegetable (Florence fennel). Both forms are a flavoursome delight and given a little know-how should be within every gardener’s reach.

Herb fennel (Foeniculum vulgare) has a billowing stature, reaching up to around 1.5m in height. Its fine, wispy leaves make the perfect accompaniment to parcels of oven-baked fish and are used in much the same way as dill.

This sunloving perennial herb is often grown as an annual but is perfectly hardy and will often self-seed from one year to the next. Enjoy the leaves fresh, preserve them for winter use, or savour the dried seeds in sauces and breads. Florence fennel (F. v. var. dulce) is a shorter version of herb fennel, reaching just 60-90cm in height. Also called finocchio, the gourmet treat here is in the squat, swollen bases, which can be roasted, grated into salads or steamed as a healthy side dish. Like herb fennel, it enjoys the sun but can disappoint if sown too early in the season. Seeds started off in June should thrive.

Herb and Florence fennel require very similar conditions. Originating from the Mediterranean region they prefer a sun-drenched corner of the garden where they won’t get battered by wind. Soil type can directly affect the look of your fennel. Herb varieties grown on rich soil will be bushier, while the same herb grown on free-draining, gravelly or sandy plots will be far taller and less lush but equally as aromatic. Either soil is suitable, so long as you are happy with the outcome.

Florence fennel, however, is most successful when grown in a free-draining spot that has been improved with added compost to make it that little bit richer. In this way you will encourage a bigger ‘bulb’. As it is best sown in June or July, it is the ideal plant to follow on from early summer crops such as first early potatoes, peas, or the first flush of salads. Simply fork in a little more garden compost after the initial harvest to give the ground an added boost, and then rake the seedbed to a fine tilth just before sowing. Warmth and full sun is the order of the day and given these essential requirements you have every chance of success with this crop.

The biggest source of disappointment when growing Florence fennel comes from its tendency to bolt (run to seed) before it has produced its bulb. Two things cause this premature seeding: sowing too early on in spring or disturbing the young plant’s roots. For this reason the seeds are best started off in situ from the beginning of June to July. This will do away with the need to transplant the seedlings. An early summer sowing will avoid spring night chills, while the gradually shortening days after June 21 will prevent the plant’s response to lengthening days that would naturally see it bolt.

Either station sow three to four seeds at a time every 20cm in rows 45cm distant, or drop one every few centimetres to thin out later on. A good, evenly moist soil will help speed germination, so if the ground is dry, water along drills before sowing. Place each seed 1cm deep and once covered, water thoroughly using a watering can fitted with a rose.

Herb fennel is grown in much the same way, though as bulb production isn’t a consideration, sowings can begin up to a month earlier, as soon as the danger of frost is gone. For an earlier start, or where space is temporarily occupied, use pots or plugs of seed compost and cover the sowings with perlite. Pop these into a propagator with a temperature of around 20°C, or simply start them off under cover on a warm, indoor window sill. Thin to leave one seedling per pot or plug.

Pot-raised herb fennel can be planted outside once the weather has warmed a little, usually from early June. Don’t forget this herb can reach lofty proportions, so position it to the back of the plot. Direct-sown fennel should be thinned to leave one plant every 30cm or so. The young plants will quickly merge into one feathery mass of leaves.

Florence fennel sown in a continuous line should be thinned in stages to produce one healthy plant every 20cm. Station sown rows can be thinned to leave just one seedling per position. Needless to say – keep the strongest plants in place!

At this early stage the important consideration is maintaining a steady supply of soil moisture – crucial for bulbing fennel – while keeping a beady eye out for slug and snail damage. Unfortunately, slugs find the young seedlings irresistible, so be on hand to pick off any you see, or use your favourite organic method of control. Watered on nematodes are effective and will afford adequate protection until the plants are more established, though they do require constantly moist soil. If slugs are at epidemic levels, or if you only have a patio plot then worry not, as both fennels can be grown in decent-sized containers at least 15cm deep and 30cm wide. Use a loam-based compost for this.

If you’ve managed to get your plants to the seedling stage then the tricky part of growing fennel is behind you. Coaxing them to maturity is the easy bit and, in the case of Florence fennel at least, is simply a matter of careful watering and feeding.

Do not let Florence fennel dry out, as this may cause bolting and the subsequent lack of a bulb. Apply an organic liquid feed to the soil every couple of weeks to give the now rapidly developing plants the nutrients they need – liquid seaweed manure is ideal for this. You can help lock both nutrients and moisture into the ground by applying a mulch around your plants. Florence fennel can also be earthed up to increase the size of the bulb (see the ‘Bigger, better bulbs’ box).

Herb fennel is less particular and can survive unscathed through even the hottest, driest summer. Cut back the stems in the winter once the feathery top growth has died down and your fennel should spring back to life the following spring, or at least have self-seeded. One word of warning however: avoid growing fennel near coriander or dill, as these plants can cross-pollinate, affecting the viability of the crop and number of seeds produced and only leading to disappointment.

Florence fennel grows fairly rapidly, with bulbs being ready for harvest in as little as four months after germination. This means that June sowings will yield their bulbs by mid-October, when they’ll have reached tennis ball proportions.

To harvest, simply loosen the roots with a fork to expose the bulb then cut it off cleanly with a knife about 2cm above ground level. Eat them fresh, or store in a cool place to enjoy within a few weeks. In a mild autumn, the bulbs will then sprout new leafy growth, which can be enjoyed in exactly the same way as herb fennel – a double bonus!

Herb fennel should be harvested as and when it is needed, cutting away some of the feathery foliage a bit at a time. There will be plenty of it, so dry the leaves for use over winter, infusing the fresh ones in oil, or freezing them. When the fennel finally rises to flower, the resulting heads will reveal their haul of seed for drying and storing, extending this useful herb’s season of enjoyment right through the winter until new growth appears in spring. 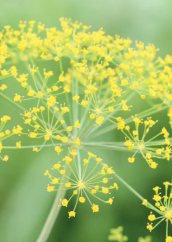 When you stop to think about it, herb fennel is a remarkably useful plant as little goes to waste. Every part of the herb can be enjoyed, including the leaves, fleshy stems and, of course, the seeds. These are a convenient way of capturing the distinctive aniseed taste of fennel for enjoying over winter when the green parts of the plants will be long gone.

Gardeners who want to save some seed will first need to fully dry it out before storing. This way it will keep for longer and won’t be prone to rapid deterioration. To do this, collect the seed in autumn when it is fully ripe. Spread it out onto a fine mesh screen or small section of clean horticultural fleece so that air can get to all sides. Dry it in a well-aerated, shady room, avoiding direct sunlight. Every couple of days, flip the seeds over, which will help them to dry evenly. After a couple of weeks they will be ready for storage. Decant into an airtight container and store in a dark, cool place such as a larder. They will also be viable for sowing the following spring.

Florence fennel can be encouraged to yield bigger bulbs with some targeted attention. First and foremost it’s important to keep the ground moist at all times and ensure soil nutrients are at their optimum. In this way the plants will put on the quickest growth, which means bigger bulbs.

It’s worth re-emphasising the importance of sowing later on in the season to avoid cool nights. Even in June chilly weather can occur, in which case add a few layers of fleece over the soil to trap the warmer daytime air.

By July the nights should be warm enough to avoid the danger of your plants running to seed (a process also known as bolting). A further precaution is to select only those varieties that have been bred to display excellent bolting resistance. Some of these can even be sown slightly earlier in spring to give a summer crop.

Like potatoes or leeks, fennel bulbs can be earthed up to increase their size. This blanching will also improve the quality of the bulb, giving a greater proportion of tender white flesh. Start earthing up in late summer when the swollen bases have reached the size of a hen’s egg. Continue this process over a three-week period, until the bulbs reach the size of tennis balls when they’ll be ready for lifting. 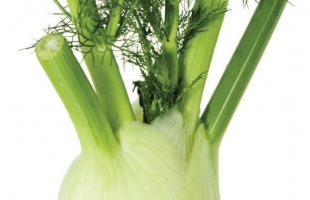