It's sown at a time when virtually all other veg are ready to harvest, provides a gourmet-standard crop in the midst of winter weather and slugs seldom give the tasty leaves a second thought.Welcome to the topsy-turvy world of chicory

A packet of chicory seeds is a valuable addition to the veg growers’ armoury. They can be sown now, just as plot space is being freed up owing to the start of the summer harvest, in order to produce mildly bitter leaves or creamy heads throughout the still of winter. The plants are easy to grow, resilient and – particularly surprising for a leafy crop – will be left alone by all but the hungriest slugs and snails (the bitterness of the leaves and cool growing conditions put paid to them).

There are actually three types you can grow, and each has its own distinctive appeal. Red chicory, more commonly known as radicchio, produces tart, scarlet leaves which become more intense in colour and flavour the colder the weather. Sugar loaf chicory, as the name implies, has a sweet taste, coupled with a growing habit similar to traditional lettuces (it’s also known as loose-leaf chicory). And Witloof, or forcing chicory, is finished off in the dark to produce smooth, creamy heads of young, white leaves, known as ‘chicons’ (sure to bring a touch of class to a winter salad). Each is versatile enough to be raised in containers or raised beds, as well as the open ground.

Chicory will grow in a wide variety of soil types – the only situation it is sure to struggle in is waterlogged ground, so your chosen bed needs to be free draining. The plants prefer an open, sunny position which, coupled with a fertile soil, will allow them to thrive.

Ideally you should prepare the sowing site the previous winter – digging it over and adding plenty of organic matter – so that the soil has settled come sowing time. But as long as the manure or garden compost you use is very well rotted you can get away with doing it as little as a month before sowing. Doing this will give the young plants plenty of nutrients to draw upon while helping the soil to retain valuable moisture during the critical summer months. Allow the ground to settle and then rake it over to create a fine tilth, breaking up any remaining clods and drawing large stones and debris to the side. About two weeks prior to sowing, rake in an organic, general purpose fertiliser, such as concentrated chicken manure, to give young plants a boost when they emerge.

You can sow seeds of all three types of chicory this month or next, in drills spaced 30cm apart. Mark out a straight line using a piece of string stretched taut between two pegs and make a furrow in the soil alongside it about 1cm deep, using a garden cane or draw hoe. Water the drill if the soil is dry, then thinly sow the seeds along it, before covering them up and watering again to settle. The seed can also be sown into modules under cover for planting out as seedlings.

Your other option is to cultivate in containers at least 45cm in diameter. Fill a pot with multipurpose compost, gently tapping the sides to settle it down then sow seeds sparsely over the surface. Cover them with a 1cm depth of sieved compost or a layer of vermiculite. The pots should then be placed in a part-shaded corner of the plot or within cold frames if you are starting them off at a cooler time of year (you can have some success sowing them as early as April but bear in mind that doing so does mean that they will be subjected to the summer heat, which can cause stress and lead to them running to seed, or ‘bolting’).

Seedlings will emerge within around two weeks and once they reach 2cm in height should be ‘thinned out’ to ensure those that remain have sufficient space to grow on. This can be done in stages – simply plucking the weaker-looking specimens from the soil – to leave an ultimate spacing of 20cm between individual plants. Some varieties of radicchio may require more room than this, so be guided by the seed packet instructions.

Radicchio and sugar loaf chicory may also be grown as cut-andcome- again crops. This popular technique will allow several cuts of smaller, tender leaves to be made throughout the summer. Let the seedlings germinate but thin them to a much denser spacing – 2–5cm is fine. Cut the young leaves when they are 2–10cm long, trimming them off about an inch above the soil to protect the central growing point. The young plants will re-sprout and be ready for another cut a few weeks later. Once the leaves begin to get a little tough, thin the plants out to the spacings detailed on the previous page and let them grow on into mature heads.

Once they’re left to mature, all chicories develop in two stages – first they will produce a strong root with green leaves, which can be picked over for using raw in salads. After this, the leaves begin to change: sugar loaf varieties will go on to die right back and then re-grow, while radicchios start to turn red as a response to dropping temperatures.

Young chicory plants will require minimal competition if they are to grow on into mature heads of leaves or stocky roots for forcing. Be sure to keep the rows free from weeds by regular hand weeding or careful hoeing. You should also water the area regularly in warm weather in order to stop the ground drying out and the plants becoming stressed.

Sugar loaf chicory and radicchio will be ready for cutting by the autumn but they will often sit throughout the winter given a bit of protection from the worst of the weather. They can withstand milder frosts, but covering them with cloches, horticultural fleece or straw will keep them healthy until they are ready for use, without impairing flavour.

Roots of Witloof chicory will be ready to force by mid-autumn, when the tops measure approximately 3–5cm across. Follow the instructions in the box below for perfect chicons every time.

Regardless of their colour and type, all chicories have a distinctive bitter taste – a rare exception to the natural sweetness of most vegetable crops. Sugar loafs should be harvested as soon as a lettuce-sized clump of leaves has formed. Cut the heads leaving a 2cm stump in the ground to re-sprout, as a second crop of leaves will often follow.

Radicchio can be cut in the same way, or you can take individual leaves from the outside of the head as needed. The longer radicchio is left in the cold winter air, the deeper the red colouration will become, so delay harvesting if you favour a handsome ruby-red leaf colour.

Forced chicory plants will be ready to cut once they reach 10–12cm in height and have formed a good, tight head. Cut them with a garden knife to leave a stump and it is likely you will be able to take another head of forced leaves a few weeks later. 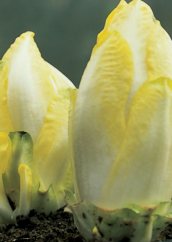 The Witloof varieties of chicory can be forced from November to January. To do this, lift roots when they are around 3–5cm wide at the top in November and cut off the leaves (they can be eaten) so a 2cm stump remains. Pot the roots up into containers of soil or sand – about four to six per 20cm container – and keep them in total darkness by placing another pot of the same size over the top, with the drainage holes completely covered. Keep the roots damp and maintain a temperature upwards of 10°C (50°F) – a garage is perfect for this. Within three to six weeks your chicons will be ready to harvest. A steady supply can be had by storing the lifted roots horizontally in trays of sand and placing these in a cool spot such as a garden shed until ready for use.

Alternatively, chicory can be forced in situ in sandy soils. Cut back the leaves as above, then draw up the earth around the stumps in similar way to earthing up potatoes, to create a ridge about 18cm deep. The chicons will be ready for use in mid-winter, as soon as their tips start to appear through the earthed-up soil.

Timing is important when sowing chicory and there are a number of windows of opportunity, depending on the chicories you wish to grow and the way you want to grow them. Chicory grown for autumn and winter use – the forcing types, mature heads of sugar loafs, or red-leaved radicchio – should be sown from June to early August to ensure they have enough time to establish themselves before the colder months set in.

If you want to grow heads of leaves for summer picking – radicchio with a less intense colour and bitterness, or sugar loaf chicory and radicchio for harvesting as a cut-and-come-again crop – then you should sow under cover from February, or from April onwards straight outdoors. 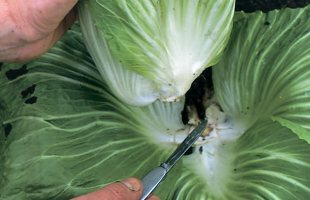