Many kitchen gardeners are put off growing Brussels sprouts by memories of the watery, off-grey veg placed on their plates in childhood. But cooked carefully – boiled for just a few minutes then finished off in a frying pan with a knob of butter and a generous grind of black pepper – you’ll discover they are a world apart. Home-grown sprouts can be picked and put into the pan within the hour to maximise their flavour.

Brussels sprouts are tough plants that crop throughout the winter months when times are lean. They are thought to have acquired their name due to the fact they were first grown commercially in Belgium, where they were a favourite winter vegetable. Having proved a hit, the hardy plant made its way across Europe and has become an established sight on many British plots. Our cool, maritime climate suits this vegetable well and by growing both an early and a late-cropping variety it is possible to keep harvesting from September through until the following March.

As with other brassicas, such as cabbage and broccoli, Brussels sprouts need a firm soil that is not acidic. Most plots are well-suited to this requirement, and even those that are less than ideal can be treated to bring them up to scratch. Dramatic improvements over the past decade have seen a whole raft of carefully bred F1 hybrid cultivars enter the seed catalogues. These promise consistent results and an excellent flavour, even without the traditional exposure to frost that the older varieties need. All sprouts will work hard for their space, not only producing the traditional button-sized veg but also the added bonus of sprout tops – the cabbage-like head at the top of the plant which can be enjoyed in much the same way. Two harvests for the effort of one can’t be bad!

Brussels sprouts can grow in sun or partial shade, making this a useful crop for those slightly trickier parts of your plot. Always pick a fresh area of ground where you haven’t grown brassicas for at least two years; this simple requirement will help to reduce any nasty surprises coming from pest and disease build-up in the soil.

Diligent ground preparation is essential as sprouts need a firm, neutral to alkaline soil if they are to grow well. Pick a well-drained position and begin improving the growing area the autumn or winter before sowing. Dig the soil over and incorporate ample organic matter in the form of well-rotted manure or garden compost. All members of the brassica family are very heavy feeders and need lots of nitrogen to grow, so it’s hard to add too much of this. Dig the organic matter into the soil and leave it to settle over winter. Ideally, brassicas should follow on from an earlier crop of peas or beans, as these two crops are members of the legume family, which enrich the soil by taking nitrogen from the air and fixing it in their roots. This free source of nutrients can then be exploited by your hungry Brussels sprouts.

About a month before sowing, check the pH of your soil. If it is anything below 6.5 you will need to add lime to raise the pH so it is no longer acidic – aim for a pH of 7 or higher. Sprinkle the lime over the soil surface soil and allow rainfall to wash it down. Do not dig it in or you will fluff up the ground, which should have become nicely firm by now. Gardeners growing on clay will find that lime has the added advantage of causing the fine soil particles to group together, helping drainage to improve.

Brussels sprouts are best started off in a seedbed and planted into their final ‘permanent’ plot once they have grown on a little. This enables a spring-time crop to be sneaked in before the sprouts take up their final positions plus the plants will develop a stronger root system when transplanted. To prepare your seedbed, begin by raking it over and pulling any stones or debris to the side to leave a level surface. To sow, draw drills into the soil using a garden cane. The drills should be about 1cm deep and spaced 15cm apart. Sow the seed very thinly to avoid overcrowding and undue waste. Cover the drills back over with soil and water along the rows using a watering can fitted with a rose.

The best time to complete your sowing is from late March to mid-April, depending on the temperature in your local area. If the soil is still cold and wet, leave sowing for another few weeks. There is little advantage to be gained from starting the plants off earlier, as they’ll need to be transplanted sooner when other crops may still be in the ground. Early sowings also increase the chance of sprouts appearing too soon in the season, when warm summer weather may cause them to unravel and lose their culinary appeal.

Seedlings should appear within about 10 days and from this point onwards your seedbed will need to be kept moist. Once they are 2cm high, thin them to a spacing of 5-7cm. When they reach 10-15cm tall, which will be about five to six weeks after sowing, it is time to transplant them to their permanent bed. Give this area a final boost just before transplanting time by sprinkling over a general purpose organic fertiliser, such as blood, fish and bone meal.

To transplant your young plants, thoroughly water them the day before and try to preserve as much of the seedbed soil around the root system of each one as possible to minimise disturbance. Push a hole into the new bed using a dibber and carefully re-plant them, pushing the soil back around the roots. They will need to be well firmed in, so either press down around each plant with your hands, or insert a dibber next to the plant and rock it back and forth to push the soil tightly up against the roots. Your seedling should offer enough resistance so that when you try to lift it out of the ground by a leaf, the leaf tears off before the plant is uprooted. Space plants 60-75cm apart in both directions, or 45cm apart if you are growing a more compact variety. Water the Brussels sprouts in to settle the soil around the roots and, if cabbage root fly has been a nuisance in the past, consider placing a brassica collar around each plant to stop the female flies accessing the base of the stems to lay their eggs.

Look after your Brussels sprout plants and they will reward you with the biggest possible harvest. Keep them well-watered during dry spells so they are not struggling for sustenance. Maintaining a weed-free bed will also help, but you will need to remove unwanted plants by hand to avoid damaging the shallow root system. By August or early September, nitrogen levels in the soil may be running low and it is at precisely this time that the sprouts are beginning to swell. Maintain the momentum by sprinkling a couple of teaspoons of dried blood or a similar nitrogen-rich fertiliser around each plant.

Brussels sprouts can be susceptible to a number of pests, but the good news is it’s easy to keep most of them at bay. Pigeons may rip off the tender young leaves, while the cabbage white butterfly is likely to make an appearance. The latter lays its eggs on the plants and the caterpillars that emerge can munch their way through the leaves at a shocking rate. Banish both from your crop by supporting fine netting over the plants soon after transplanting time. Special brassica netting is available which can be draped over a grid of upturned plant pots on top of bamboo canes to keep the netting well clear of the plants.

Depending on whether you are growing an early or late variety, your Brussels sprouts could be ready for harvesting from September to March. Begin picking your sprouts as soon as they reach about 2cm wide. At this point, the veg will still be tight and at their sweetest. The lowest sprouts on each stem will be ready first, with those further up maturing later on; this means that a few sprouts should be picked from each plant at a time, rather than stripping a single stem bare in one go. To remove individual sprout buttons without damaging the plant, firmly snap each one downwards.

As your Brussels sprouts mature, remove any yellowing leaves that appear, as these may act as a source of infection. Enjoy the veg fresh or freeze them by blanching them for a couple of minutes in boiling water, plunging them in cold water to stop the cooking process and drying them off before packing them into plastic containers for the freezer. Frost improves the flavour of traditional varieties, but this makes little difference to modern F1 hybrids. To encourage the final sprouts to ripen, remove the top of each plant, which can be enjoyed as a leafy green vegetable in the same way as cabbage. Spent plants are very woody so they should be cut up before they are added to the compost heap. 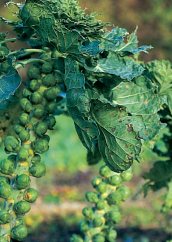 Probably the number one cause of failure for those new to growing Brussels sprouts is a lack of firm soil. The plants can reach a metre tall, making them very top-heavy, which is why they need such firm ground. If the earth is loose there is the danger they may topple over or rock back and forth in the wind, snapping the fine roots and subsequently reducing the yield or causing the sprouts to become loose and open. These ‘blown’ sprouts have a very disappointing texture and flavour, rendering the crop pretty much useless. Thorough soil preparation, well in advance, will give the ground enough time to settle. If in doubt, walk over the plot shortly before planting time to further firm the growing area.

Of course, picking a sheltered position will reduce the chances of plants rocking back and forth. Additionally, a thick mulch of garden compost late in the summer will help to support stems at their base, as will banking up the soil around the plants. Where a windy site is unavoidable, transplant your young Brussels sprouts into a shallow trench, gradually drawing up the soil around the stems as they grow, so they can root into this for added reinforcement. In windy autumns, taller plants may need staking individually to keep them steady and in position.

Brussels sprouts may not be everyone’s favourite vegetable, but the nutritional value that they offer should earn them a place on every dinner plate. Recent research carried out at London’s Imperial College and supported by the British Heart Foundation has shown that eating iron-rich greens such as kale, broccoli and Brussels sprouts could help prevent heart attacks and strokes. The presence of high levels of the naturally occurring chemical sulforaphane has been proven by scientists to boost natural defences, plus they protect arteries from disease. They can also slow down the progression of existing disease and contain exceptionally high levels of vitamin C. So perhaps we should be reaching for a second helping of sprouts with our Christmas dinner later this month! 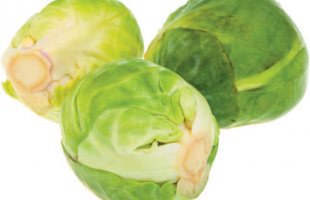