There are few crops easier to grow than these bite-sized fruits. Plant them today and experience a sweet, juicy homegrown harvest

Many of us carry fond childhood memories of hunting for shiny, plump blackberries on countryside walks. Timing was of the essence: pick them too soon and you’d be left with a bitter harvest: too late, and they’d have shrivelled up. But get it right and a sweetly flavoured crop was yours for the taking – along with the resulting purple-stained fingers!

With such an abundance of wild blackberries, growing these tasty natives might not seem worthwhile, but varieties bred for the garden will be more likely to provide a sweet treat without the viciously sprawling arched stems of their wild cousins. Many modern cultivars are thornless, which means you can collect the fruits without getting scratched. And why stop with blackberries? They have been crossed with raspberries and other brambles such as the dewberry to create a whole range of hybrid offspring. These vary in their taste, size and colour, but all offer a real burst of flavour. Options include the tayberry, loganberry and boysenberry – though you’ll find plenty of others to choose from, too.

While hybrid berries prefer a sunny position, blackberries are vigorous enough to be grown in partial shade, even on a north- or east-facing wall where few other edible crops are suitable. Train them along horizontal wires or fanned out across a fence or wall for best effect. With their easyto- care for, prolific nature, new berry growers won’t regret making room for these soft fruits.

Blackberries are one of the most accommodating fruits you can plant and require no special treatment. They will cope with just about any soil, although hybrids prefer one that is on the acid side of neutral. If your earth is alkaline, improve it by adding sulphur chips prior to planting.

Prepare the ground about a month before planting by cultivating it thoroughly. First, clear a patch that is at least 60cm square, then dig down to a spade’s depth, excavating the soil and putting it to one side. Next, add a 5-7cm layer of well-rotted organic matter and replace the earth. This will leave a slightly raised profile and a layer of goodness for roots to reach down to. If your soil is poor, improve the section above this layer by forking in some chicken manure pellets or a similar organic fertiliser for a further boost.

The blackberry and all its hybrids are selffertile, which means they will pollinate themselves. While you can get away with growing a single plant on its own, it can be more rewarding to cultivate a few different strains and hybrids to develop your own healthy pick-and-mix. Always leave plenty of room between them – up to 4m depending on the variety you are planting – as this will discourage competition for space and water.

About a month after preparing your growing area, the soil will have settled down.

Both blackberries and hybrid berries are available as bare-root plants – or canes – and in containers. Those in pots may be set into place at any time of year, but bare-rooted types should be planted between the end of October and the beginning of spring. Late February to March is a good time, as the soil will soon be warming up and canes ready to start growing.

You need a suitable support framework in place before planting. Stretch heavy-duty galvanised wires horizontally along a fence or wall using vine eye screws, or between freestanding posts. Set the first wire 60cm above ground level then space each successive one 30cm from the next so that the tallest is 180cm above the soil. Free-standing post-and-wire structures allow you to pick the crop from both sides and offer plenty of air circulation, while fence supports will save space and prove an attractive feature in spring when the white or pink flowers cover the canes. Make sure posts are buried at least 60cm into the ground and give them further rigidity by hammering a supporting corner strut at a 45 degree angle to each one – this will keep them secure in heavy winds.

To plant, simply dig out the prepared soil to allow plenty of room. Bare-root canes will need their roots carefully spread out so they can quickly begin growing. Fill back the earth so that the ground level is at the top of the dark soil line on the bare canes. Firm the ground down with your heel and then water. Container plants will need to have their roots teased away from the outside of the rootball. Cut bare-root canes back to about 22cm tall once you’ve set them in the soil and apply a generous mulch of organic matter around their base to lock in moisture and keep weeds down.

Berries are produced on last season’s growth (also see our panel, ‘Prime time’). At any one time there will be canes that are about to fruit as well as new wood that will bear next summer’s crop. This makes pruning blackberries and their hybrids very straightforward as there will only ever be two types of cane at any one time.

Training them is a question of separating out the two to make picking easier and to minimise the risk of diseases passing from older to newer growth. The simplest way to do this is to tie the canes into the horizontal wires as they grow, so that newer ones are trained to one side and the current season’s fruiting canes to the opposite side. In autumn, those that have fruited are cut right down to ground level, leaving just the new canes for next summer’s crop on the wires. Next year, these will become the fruiting canes and any growth that occurs will be tied in to the position previously held by last season’s canes. The fruiting wood therefore alternates sides from year to year. Tie in three to four at a time, to each wire, limiting the number of fruiting canes to around 16 per plant.

An alternative to the above method is the fan system. The same principle applies, but this time the fruiting canes are splayed out evenly against the fence while the new growth is loosely tied together to form a vertical column. In the autumn, when the fruited canes are cut back to ground level, the new growth can be unleashed, spaced out into another arrangement and tied in ready for next year.

Blackberries and hybrid berries do not require any pampering.

Keep plants watered in their first year, especially during a hot summer, though after a full growing season they shouldn’t require irrigation if they are properly mulched each spring. Use any organic matter for this purpose and extend it out to cover a wide area of ground surrounding each set of canes. The mulch will rot down over time to feed the crop and increase yields.

Dig out and cut down any canes that emerge away from the main cluster, and keep the ground weed-free by pulling up any unwanted plants that make it through the mulch. If yields begin to drop off then add more organic matter to the soil surface or tease in a good handful of chicken manure pellets for each plant. There is little need to use netting as there are usually enough berries that a few losses to birds won’t put a significant dent in your harvest.

Plants should remain productive for at least ten years and often 20, so it will be a while before you need to replace your canes. If you want to boost your stock, additions can be raised from healthy, disease-free growth by bending down a cane and burying the tip 25cm into the ground. Firm the soil back around the tip; the cane may need pinning down to keep it place. Do this in late summer and by November it should have rooted. At this stage, cut away the parent cane to leave a 30cm rooted length behind. Replant the fresh growth into its new home the following spring.

Unlike many fruit, blackberries and hybrid berries are produced in succession over a number of weeks, lessening the chance of a glut.

Pick them as they reach their final colour. Be gentle when harvesting, as the berries easily bruise; reduce handling to a minimum and they will keep for longer. Wet berries are more likely to go mouldy, so try to collect them when dry. The first fruits will be ready from the end of July with the last taken from the canes in October. Enjoy the berries fresh or freeze them for later use. 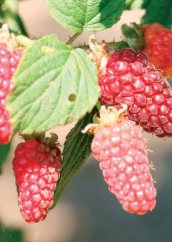 Few pests trouble the blackberry and its hybrids. The one you’re most likely to encounter is the raspberry beetle, which attacks any bramble-like fruit. It is the insect’s grub that causes the damage, feeding at the base of the berries and working its way into the fruits to distort them. If you suspect your canes have raspberry beetle then cut open an infested berry and look for pale yellow-brown grubs.

The danger period for the pest is early to mid summer. Picking a late-tofruit variety will prevent attack. If the grubs do appear, remove any mulch and fork over the soil around the canes in winter to expose overwintering beetles to hungry birds. Make sure the birds can get at the canes by also removing any netting that’s in place. Add a replacement mulch the following spring. In serious cases, it may be necessary to cut back all the canes to ground level to ensure a clean start the next year. You will lose one year’s crop as a result but fruiting should restart the following season.

A less common pest is the red berry, or blackberry mite, which emerges in the spring to feed on developing fruits at the heart of flowers. They inject their saliva into the developing berries which causes uneven ripening later on in the year. There is no control, but by correctly cutting back fruited canes each autumn, any problems will quickly be contained.

Exciting developments are taking place in commercial blackberry production. Work by the University of Arkansas, in the United States, is promising to revolutionise the way these fruits are grown. Berries currently appear on the previous season’s canes, so that producers have to wait at least a year before enjoying a crop. The university is developing primocane blackberries, which fruit on the same season’s growth. This has the dual effect of extending the season of production and making a simple-to-grow soft fruit even easier to care for. At the end of the season all the canes are simply cut back to ground level ready for new shoots to appear in spring, much like autumn raspberries.

Norfolk-based wholesale nursery Hargreaves Plants is a European partner to the university and is currently trialling and selecting the most promising strains with a view to launching primocane blackberries to commercial growers in the not too distant future. Keep an eye out for these promising plants, which may soon be available to home gardeners.