Both the Jerusalem and globe artichoke offer a culinary high point to the kitchen gardener’s year. The tightly held flower buds of globe artichokes contribute a delicate flavour that can’t be rivalled, while the tubers of the Jerusalem artichoke boast a distinctive, roasted, nutty taste that’s softened by a slight sweetness.

Despite sharing the same name and exceptional eating qualities, the two vegetables are in fact completely unrelated. Jerusalem artichokes are members of the sunflower family, eaten for their autumn tubers, while globe types are thistlelike. Both are space-hungry plants but their different growing habits make them a must for inclusion somewhere in the garden or allotment.

The lanky Jerusalem artichoke can reach a lofty 3m in the right conditions, which gives the plants a predilection for growing in rows, perhaps as a windbreak or as a shading screen on the south-facing side of the summer greenhouse. Globe artichokes are real stunners, sporting large, silver-grey and deeply cut leaves that form the perfect foil for other flowering plants. This makes them perfect for inclusion at the back of an herbaceous border where their bold form and height will create a real focal point.

All artichokes prefer a medium, well-drained but nutrient-rich soil. Jerusalem artichokes will do best in full sun but can still produce a reasonable crop in light shade. Bear in mind that they grow very tall, so put them to the back of vegetable beds where they won’t overshadow other crops.

Globe artichokes, however, need all the sun that can be mustered. Prepare growing sites the autumn before planting by digging in ample compost or well-rotted manure. Globe artichokes will occupy the same position for about five years, making thorough ground preparation essential. Pick a bed that is out of the crop rotation system for these artichokes. Jerusalem types can be completely dug up each autumn, but a few tubers invariably slip the net to sprout up the following year – aim to grow them as a perennial also, replanting some of the harvested tubers each spring.

Establish Jerusalem artichokes in February or March, as soon as the worst of the winter is over.

Set out a stringline and use a draw hoe to create a furrow 15cm deep. Fresh tubers from the garden centre or seed catalogues can then be placed, just like potatoes, into the bottom of the furrow at least 45cm apart, then covered over to leave a 5cm ridge along the row. Sprinkle some general-purpose organic fertilizer over the top and tickle this into the soil surface. If you want to grow more than one row leave 1m between them.

Globe artichokes are planted about a month after Jerusalem types using young plants, or suckers. First, sprinkle some fertilizer over the ground and fork this in. Plant the suckers at the same depth they were at in the nursery pot, about 1m apart in each direction, and water them in well. If you are lucky enough to know a generous gardener with an established globe artichoke then ask if you can have a few shoots from their plant. When they are about 22cm high in spring, carefully ease a spade down vertically into the clump and lever out fresh shoots. Make sure these have plenty of root attached and then plant them as for bought suckers.

The sturdy shoots of Jerusalem artichoke won’t take long to break through the soil. As they grow, earth them up just like potatoes, drawing soil up around the base every few weeks until the ridge is 15cm high. This will help to support the lofty stems. As they grow ever taller they will need further support – knock in posts at either end of the row and secure horizontal wires between them. Tie the stems to the wires as they reach them so that they don’t rock in the wind.

Globe artichokes won’t need too much attention in their early stages, except for watering in dry weather. A mulch applied in May, once the shoots have got well away, will also help to reduce the stress from planting and lock in the moisture. During the first few weeks, young suckers may also need protecting from drying winds or harsh sunlight. Once they’ve found their feet, they quickly get away.

Keep watering globe artichokes in their first year and cut away any flower buds that appear. While this may be frustrating, preventing flowering in this way will concentrate all the plants’ energies into forming a solid crown. Next year your patience will be rewarded with a stronger, more prolific crop of buds.

Sky-high Jerusalem artichokes may also require some additional watering in dry weather, though well-prepared ground will help hold in plenty of moisture. If the soil becomes weedy, pull unwanted plants by hand to ensure all water goes to the vegetables themselves. The eruption of leaves from globe artichokes is likely to suffocate any weeds that attempt to muscle their way in.

During October, artichokes will begin to die down. Cut back Jerusalem types to within 30cm of ground level and remove all top growth to the compost heap. Dead leaves can be cut away from globe artichokes to reveal new shoots. These will overwinter to next year but in northern gardens they may need some protection from cold spells. Draw up soil around the shoots and surround this with bracken or straw. Leave the tops of the shoots clear. Keep protection in place with wire netting and in extreme cold, add a further temporary blanket of horticultural fleece. Remove all protection in spring.

Jerusalem artichoke tubers may be left in the ground and dug up as required. If you don’t want a repeat crop next year then you’ll need to scour for every last tuber. Those left in the ground will re-sprout in the spring to start the growing cycle all over again. To make sure of a consistent and evenly-spaced crop it is perhaps best to lift the entire harvest and re-plant select tubers in early spring.

By the second summer you will be able to begin harvesting globe artichokes. Allow a maximum of six flower stems to develop per crown to guarantee good-sized buds. Cut out any others that begin to form. Large flower buds, known as king heads, will appear first of all at the end of each stem to be followed by several smaller lateral heads. Harvest the flower buds once they have reached a good size but before they open. Remove each head with secateurs, leaving a few inches of stem attached for the best possible flavour. 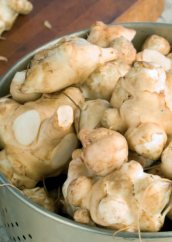 The name ‘Jerusalem artichoke’ is misleading. For a start the plant is completely unrelated to the true artichoke and doesn’t even come from Jerusalem. The confusion stems from the fact that the tubers have a taste reminiscent of the globe artichoke, while the ‘Jerusalem’ part is a corruption of the Italian for the plant, girasole, meaning ‘turning to the sun’.

Another curious quality of this poorly-named vegetable is its starchy tubers. Whereas most tubers, including the potato, store their carbohydrate as amylose and amylopectin, those in Jerusalem artichokes are stored as inulin. Inulin does not readily convert to sugar in the human body, which makes the tubers a great choice for diabetics and the health conscious. The indigestibility of inulin can, however, lead to increased wind, though cooking the tubers goes a long way to lessening this unfortunate side effect!

As if the confusion between globe and Jerusalem artichokes wasn’t enough to contend with, there’s a third – the Chinese artichoke! These are members of the mint family and like Jerusalem types are grown for their tubers. Chinese artichokes are much smaller, however, at about 5cm long, with an appearance not too dissimilar to an elongated insect cocoon. The tubers are totally delicious with a mildly nutty taste and crunchy texture that lends them to stir-frying or salads.

Chinese artichokes prefer a rich, moisture-retentive soil and are harvested just like Jerusalems by lifting the tubers as needed after the frost has nipped off the top growth. Plant the tubers in March 10cm deep into prepared ground, leaving 15cm between tubers and 30cm between rows. The plants grow to a much more manageable 45cm in height and bear square stems sporting a number of soft, felty leaves (they are related to the popular perennial lamb’s ears). 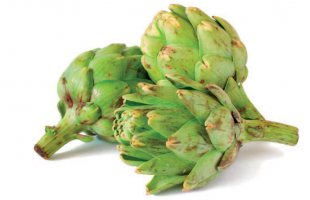