What Berries Can I Grow In The Garden? 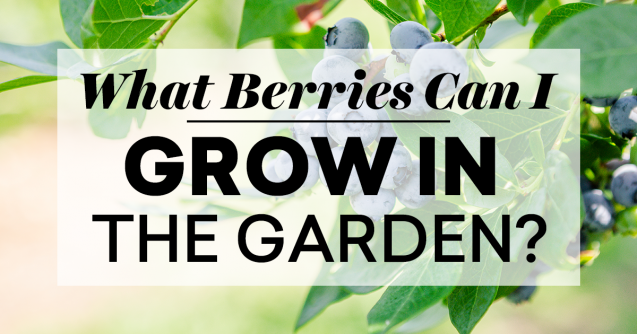 Never miss an opportunity to grow and harvest delicious fruit with GYO’s guide!

Berries are a fruit gardener’s best friend. They are perfect for beginners as they often require very little care, and the small amount of time you invest will be rewarded handsomely with abundant harvests. By carefully planning your growing year, it is possible to enjoy these delights all year round. If you are interested in increasing your pickings, here is a list of some of the most popular, and the more unusual varieties to choose from.

Blueberry
It is easy to produce blueberries in your garden provided you can create acidic soil with a pH of 5.5 or lower. Then just make sure that the soil is kept moist. Plant out at any time of the year and harvest between July and September.

Boysenberry
This incredible hybrid is a cross between loganberries, raspberries and dewberries, and is one of the hardiest berries around that can be grown in the UK. It is resistant to drought and many diseases, making it perfect for any grower looking to experiment. Plant in well-drained soil between November and December and harvest from August to September.

Cranberry
A more commonly known berry with a pleasantly tart flavour. The fruit stays intact over winter, so it makes a stunning ornamental in your growing space. The yields are ideal for use in delicious chutneys and many other preserves. Plant in November or December and start picking from September to October.

Elderberry
A versatile plant that creates flowers and fruits that can be used in the kitchen. The tiny black berries have a deep, sweet flavour that makes fantastic wine. It prefers an area of full sun but will tolerate a slightly shady spot. Plant from November to April and pick from August and all through autumn.

Goji Berry
This crop is extremely easy-going and has been proven to be more productive when under stress. The bright red berries have an unusual taste that is reminiscent of tomatoes, cranberries and malt. This perennial will produce reliable harvests year after year. Sow the seeds from January to March and harvest between July and August and also in October.

Gooseberry
Use a mulch to conserve moisture for these plants and they will reward you with the sweet, yet sour taste of these brilliant berries. Avoid feeding them with too much nitrogen as this could encourage the development of mildew. Plant from October to March and harvest yields between June and August.

Honeyberry
One of the more unusual berries, the oval-shaped, blue fruits have a sweet taste. This edible is fully hardy and prefers a sunny spot on the plot. It needs to be planted from October to November, and you can expect harvests between March and April.

Cape Gooseberry
A beautiful yellow berry which thrives on neglect. The yields have an unusual flavour of kiwi, pineapple, orange and gooseberry. Sow the seeds from February to April, you can start harvesting from August to October.

Japanese Wineberry
This beautiful plant has bare stems that are bright red and have a furry appearance. The sweet berries are usually harvested in between the cropping period for summer and autumn raspberries. Plant between April and October and pick the yields in August.

Jostaberry
Round, deep red berries that have a fantastic flavour that is unique to its type. The plant has a strong resistance to mildew and it produces very few thorns, making it more accessible to trim back and maintain. This edible is hardy down to -15°C so is suitable for the UK climate. Plant between November and December – you should be able to enjoy harvests between July and August.

Loganberry
A long, juicy fruit that is a cross between a raspberry and a blackberry. The plant is thornless and produces an average yield of 5.4kg per year with a deliciously sweet taste. It requires full sun or light shade and should be planted between November and December. The yields can be picked in July and August.

Mulberry
These often overlooked fruits are difficult to find in supermarkets, but they are worth growing for your own consumption. The soft, black berries are produced up to nine years after planting, so be patient! Plant in spring and harvest between August and October.

Raspberry
With summer- and autumn-fruiting varieties you will be supplied with these berries for many months. Regular pruning is important for the health of the edible and to produce better yields. Plant out between November and April, and harvest from June to October.

Strawberry
These fruits require regular watering and feeding to develop their flavour. Use a straw mulch to prevent the berries from rotting. Plant out between March and April or October, and harvest in July and August.

Soil improvement and growing with PlantGrow

Why you should be using coffee grounds in the garden