If you are looking for a crop that combines good looks with exceptional flavour, Swiss chard ticks all the right boxes. If you missed sowing yours back in spring, you've got a second shot at getting this easy-grow veg underway this year

There aren’t many vegetables that combine head-turning looks with a delicious taste, but Swiss chard is certainly one of them. What’s more, you can make sowings right now to enjoy fresh leaves throughout the autumn and, with a little protection from cloches or fleece, winter too.

These versatile vegetables can be enjoyed for both their spinachlike, vitamin-rich leaves and their crisp midribs or stalks, which may be eaten in much the same way as fresh asparagus – lightly steamed or stir-fried with a knob of butter and a twist of pepper. Alternatively, harvest the plants young for a tender, cut-and-comeagain salad crop that keeps on supplying nutritious leaves.

Despite its undemanding nature, you will still get the best results if you provide as ideal conditions as possible. Pick a sunny or part-shaded position. Chard can sit in the same patch of ground for almost a full year, so soil fertility is important. Ensure yours is as fertile and moisture-retentive as you can get it by digging in plenty of well-rotted organic matter such as homemade compost. Prepare a seedbed in which to sow by breaking up any clods of earth with the back of a fork and raking it down to a fine tilth. A week before sowing, rake in an organic fertiliser, such as concentrated chicken manure pellets, to give the soil a final nitrogen boost to feed the leafy crop.

If you’re sowing with the intention of enjoying a succession of smaller, cut-and-come-again leaves for salads, the distance between individual seeds can be reduced to as little as 1cm. The resulting plants can be thinned after a few complete cuts to allow a select number of them to mature to adult size and produce those brilliant stalks. Seed may also be sown two to three per module for planting out at their final spacing when they’re sufficiently large.

There are two windows for sowing chard. A spring sowing in April will ensure a harvest of leaves through the summer and autumn, while sowings made in late summer (up to the middle of August) will complete the cropping cycle, rewarding you with leaves from a few months on right through to the following spring.

It won’t take long for the seedlings to push through the soil, with most making an appearance within a fortnight. Summer-sown specimens may require some protection as the season progresses if they are to grow vigorously throughout the autumn and winter, and a blanket of horticultural fleece or a row of cloches should do the trick. Similarly, seed sown at the beginning of spring will achieve best results if given a protective blanket of fleece draped over a supporting frame. Although chard requires little special attention, the young seedlings happen to be a favourite of the bird population, so this protective blanket will not only keep late frosts at bay but will provide a barrier to curious beaks.

You can start taking your first helpings from cut-and-comeagain seedlings as soon as the plants reach 5cm in height. Carefully snip the leaves away, leaving the central and smallest ones intact, which will form the basis for the next round of leaves. Repeat two or three times before thinning to their final spacing and allowing them to grow on. For the real delicacy of tender greens allow plants to grow on to 15cm in length before cutting. Either cut across the entire plant, allowing it to regenerate for the next harvest, or slice away the outer leaves with a sharp knife and let the central ones grow on. They can be left to reach 30cm in height to achieve the prize crisp stalks. Swiss chard is best eaten fresh but can be stored in a polythene bag in the fridge for a few days. 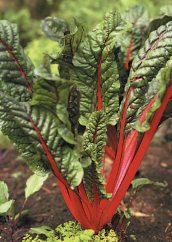 The recent interest in Swiss chard is almost certainly down to its eclectic range of stem colours, lending decorative appeal to make them a winning ingredient in potagers and other ornamental plots. ‘Bright Lights’ is the most commonly available variety and will offer a great mix of colours on both plot and plate. Try sowing this chard into large containers filled with soil-based compost or a mixture of good garden soil with added organic matter. Thin them to similar spacings as ground-grown chards.

Another attractive combination involves growing red-stemmed varieties such as ‘Rhubarb’ which have dark leaves, with a paler variety like ‘Yellow Lights’. The contrast between light and dark will look stunning and can be used in parallel rows or alternately for a traffic light effect. You can also try dotting individual specimens of these colourful characters in-between other vegetables and ornamental plants to add an extra splash of interest.

You may be forgiven for thinking that this leafy crop originates from the land-locked central European country but the ‘Swiss’ part of the name was in fact applied in the 19th century by English-language seed suppliers to set it apart from the French charde or chardon. Even the Swiss do not identify it as a national vegetable, instead referring to it as ‘stielmangold’ (plain mangold) in the German-speaking areas of the country and ‘blette’ in French-speaking parts. In Britain you may see Swiss chard called seakale beet, silver beet or simply leaf beet, while some seed catalogues have dispensed with the ‘Swiss’ moniker altogether – so make sure you look for varieties under all possible names. 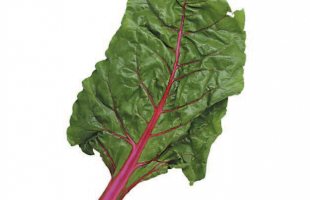