They're Britain's most popular vegetable, but you might never buy another one once you've enjoyed the earthy, concentrated flavour of home-grown spuds

That great staple of the British diet, the potato, is also understandably one of the most widely cultivated crops.

Relatively undemanding and easy to grow, it is a reliable vegetable that has won a spot in almost every kitchen garden. The potato year starts in the depths of mid-winter when the young tubers, known as seed potatoes, are left to sprout before planting outside later in the spring. More than 400 varieties are available to British growers, with varieties grouped into three main categories according to the time they take to mature. The harvesting season starts as early as late May with the ‘first earlies’ and continues well into autumn with the ‘maincrops’. In-between, the ‘second earlies’ will give a steady supply of tubers right through summer.

Today the world of the potato has been adapted for modern lifestyles, with growing methods allowing virtually everyone to try their hand at the crop, no matter what their circumstances or space restrictions. Container growing spuds in special potato tubs or pots has become common practise, while new varieties (see overleaf) are available to thwart potato blight. Modern techniques even allow for a second planting in late summer for a crop of potatoes in late autumn, raising the possibility of home-grown spuds for Christmas.

Potatoes are often credited with breaking up the ground for later crops to follow, but it is the preparation of the soil before planting and the subsequent lifting of tubers at harvest time that does this. Potatoes are very heavy feeders, so they need rich earth, ideally in a sunny part of the plot.

They prefer soil to be on the acidic side (high pH), so if you have recently applied lime to an area of soil (it’s often used to combat the brassica-infecting disease, clubroot) avoid growing them there as it will have a low pH. Frost can damage young growth, severely setting back the crop – so pick a site that’s clear of any frost pockets to give them the best chance of success. Begin preparing the soil by digging in ample quantities of well-rotted manure or compost, ideally the winter before planting and at the latest as you begin to ‘chit’ your seed potatoes (see below).

Add about a bucketful of the organic matter for every square metre. About a fortnight before planting add a good sprinkling of organic fertiliser such as chicken manure pellets to give an extra boost of nutrients.

You should order your seed potatoes as soon as possible, to allow enough time for them to sprout – a process called ‘chitting’. The idea is that they make a quicker start into growth when they’re planted outside and will therefore produce a heavier crop.

To get chitting underway, take the seed potatoes out of their packaging and lay them out in trays, with the ‘eyes’, or buds, facing upwards. Egg boxes make excellent makeshift trays and will hold each potato in place. Start all this about six weeks before planting time in a cool but frost-free location – a spare room with the heating turned off is a good bet. That usually means late January in warmer parts of the UK, and late February in cooler areas.

Once the shoots are 1–3cm in length the seed potatoes can be planted outside. The ideal seed potato is the size of an egg and will have two or three healthy sprouts. First earlies should be planted outside from early April or as soon as the soil has warmed a little. Second earlies and maincrops can follow two to three weeks later.

You can either use a hoe to draw a wide drill about 10cm deep in the soil, or dig individual planting holes using a hand trowel. Space first earlies 30cm apart and leave 45cm between rows. Second earlies and maincrops produce bigger plants and need a little more room, with 38cm spacings and 75cm between rows. Carefully place potato into each position, taking care not to damage the shoots. Then either cover them over with at least 2cm of soil or draw up earth from in-between the rows using a hoe to create a shallow ridge over the lines of potatoes.

First earlies may need some protection from spring frosts. Keep horticultural fleece to hand and place it over emerging shoots if frost is threatened, or draw up soil around the shoots using a hoe. Once the shoots reach 25cm in height they will need regular ‘earthing up’.

This simply involves drawing the soil up around the stems, leaving just the tips of the foliage showing each time. Repeat the process at fortnightly intervals until a clear ridge has formed around the plants and the top growth meets inbetween the rows.

Potato lovers can (and should) grow some of each group of potatoes. First earlies are a good choice for those with limited space as they can be planted closer together. They will also be out of the ground before potato blight threatens later on in the summer, and freeing up room for a second crop in the same season. Maincrop potatoes, however, offer a heavier harvest and the tubers tend to be much better for storing.

With their impressive foliage growth, it’s no surprise that potatoes need plenty of moisture.

This is particularly important when the young tubers begin to swell and will have a big impact on the final yield. If the weather is warm and dry, give plants a thorough soaking once a week. Maincrop potatoes will not need extra watering until the tubers are the size of marbles. To check that they have reached this size, simply scrape back an area of soil beside one of the plants to find one of the young tubers.

If you’re watering with a hose, aim at the base of plants and avoid getting the leaves wet to lower the chances of blight spreading (see box, right). Alternatively invest in a drip irrigation system – ‘leaky’ pipes which can be laid along the rows to deliver the water exactly where it is needed.

Potatoes don’t usually need much extra care other than this, although in poorer soils they may benefit from an occasional organic liquid feed to satisfy their nutrient requirements. The foliage is thick and will shade out weed growth, effectively clearing annual weeds for the crop that follows.

The time to harvest will depend on the type of potato you grow. First earlies will be ready within 12 weeks and some immature ‘baby’ potatoes can even be dug out as soon as eight weeks from planting.

First earlies are lifted as the flowers appear and while the top growth, known as the haulm, is still green. To harvest the potatoes, plunge a fork into the soil some distance from the plant and carefully work your way towards the centre, taking care not to spear the spuds with the tines. It’s worth lifting a few smaller potatoes first to enjoy as an extra early treat, leaving the other plants to grow on. Second earlies will take a few weeks longer to reach maturity and are harvested in the same way.

Maincrop potatoes will be ready towards the end of summer and into autumn. The haulms are likely to die back beforehand and this is perfectly normal – you can cut them down to ground level when they do, but leave the potatoes in the ground for at least another week. This allows the tubers to harden their skins in preparation for storage. Lift the potatoes on a dry day and leave the unearthed tubers on the soil surface for a few hours to dry off. Use any damaged or diseased tubers immediately and place the remainder into store in clean hessian sacks. These are widely available from seed potato merchants and will allow the potatoes to breathe while excess moisture evaporates. Keep them out of light and in a cool but frost-free shed or garage. 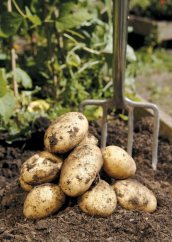 Potatoes will rarely become badly infected by disease if fresh, certified virus-free seed potatoes are bought in each year – blight is the only real worry. It is a type of fungus that kills off foliage while infecting tubers and making them prone to rot. Potato blight is most likely to strike during a ‘Smith period’ – a 48-hour spell where temperatures remain above 10°C and relative humidity exceeds 90 percent for 11 hours in both sets of 24 hours. The first noticeable symptoms of blight are brown blotches on the leaves. Infections will spread through stems and tubers, producing a soft (and unpleasant-smelling) rot.

Thankfully potato blight need never become a problem, as long as you always use certified seed potatoes from well-known suppliers; never grow spuds in the same place two years running; and try to avoid wetting the leaves when watering. You should also remove every last tuber at the end of the season to prevent any disease spores surviving to next year. There are many blight-resistant varieties now on the market. ‘Sarpo’ varieties, available from Thompson & Morgan (see right) show exceptional resilience and if you are worried about blight, these are the ones to go for – ‘Sarpo Mira’ is especially tolerant.

Like many vegetables, potatoes make excellent container crops as long as the right conditions and varieties are selected. Select a first or second early such as ‘Mimi’ or ‘Charlotte’, as they will produce smaller plants than maincrop varieties, and use a purpose-made potato barrel, sack or a good-sized container that’s at least 30cm wide and deep. Fill your container or tub with a 10cm depth of compost then position two to three seed potatoes on top. Cover them with a 15cm layer of compost and water them in.

When the shoots reach 15cm in height, begin ‘earthing up’ by adding compost to leave just the shoot tips showing. Continue to add compost as the shoots push upwards, leaving the tips clear each time to enable them to grow on. Water regularly in hot, dry weather and apply an organic liquid feed to help the tubers swell to a good size. The potatoes will be ready to harvest when the plants flower, or not long afterwards.

Plant potatoes from late January in a heated greenhouse or late February in a cool one for a crop as early as Easter. Specially held-back seed potatoes from seed merchants can be planted in late August or September for a crop in late autumn. Keep these containers in a sheltered position and free from frost and you may even be able to enjoy a few of your home-grown spuds at Christmas. 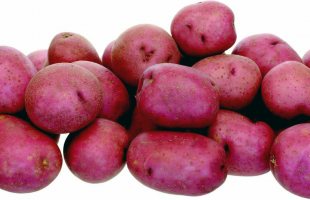