The apple has the assumed title of Britain’s national fruit – but there’s a strong case for the gooseberry too. Nowhere else are these deliciously tangy berries grown and consumed in such quantities as here, thanks no doubt to our cooler, maritime climate, to which the plant is ideally suited.

The ‘goosegog’ has always been popular, but it was perhaps during the 19th century that its fan base was most enthusiastic. At that time there were numerous clubs devoted to the fruit dotted throughout the country, whose members cultivated literally hundreds of different varieties. Competition to grow the largest berries was fierce, with some types swelling to hen’s egg proportions!

Gooseberries are, of course, as worthy of a space in the kitchen garden as ever, whether your ambitions are size or flavour orientated – or both. The soft fruits are some of the first in the garden to appear (they can be picked from June), and are arguably the very easiest to grow. If you’ve never tried cultivating your own before, then you’re in for a pleasant surprise. Home-grown gooseberries are a world apart from the shudder-inducing offerings sold in supermarkets, which tend to be hard, under-ripe berries, good only for cooking with ample sugar to tone down their tart taste. Garden or allotment goosegogs, in contrast, can be picked at their moment of perfection to appreciate the sweet Muscat-like flavour to the full.

Gooseberries are available in near-white, yellow, green or red colours, with smooth or mildly-hairy skins. Both dessert and culinary varieties can be grown – the latter for inclusion in yummy pies, fools and jams, while the former are sweet enough to be eaten straight from the bush. Many varieties double up as both dessert and culinary varieties simply by picking half the fruits slightly before they fully mature, when they will be firmer and slightly tart, but ideal for cooking.

Not many fruits are as easy-going as gooseberries, which will grow happily in most soils and can even tolerate partial shade. They prefer cooler conditions, so are great for northern gardens where other sweet crops may struggle. The further north you are, however, the more important it will be to plant your gooseberry in full sun, to make the most of its warmth. Pick a site that’s free of frost pockets, too. The plants may be very hardy – but they flower early in the spring and can suffer at the hands of a late cold snap, which will damage the blossom, reducing the number of fruits that set.

Any well-drained soil will be suitable for a gooseberry. As plants will be in the ground for anything up to a couple of decades, it is worth taking some time to prepare the ground diligently. Incorporate very generous quantities of compost or well-rotted manure to boost the nutrients available. If you have the time, dig this organic matter in a month or two in advance, to enable the soil to settle back down. Alternatively, enrich the growing medium at planting time by digging out generous holes and filling the bottom of them with a layer of compost or manure. Cover this over with another of soil before placing the gooseberry, to prevent root scorch.

Gooseberries are available either bare-rooted or container-grown. The former may be planted in the autumn as soon as they become available, or in February or March once the worst of the winter weather is over and soil conditions allow. Container-raised plants can be set into place at any time of the year, barring the middle of summer – spring is an excellent time of year to think about planting one.

The easiest way to grow a gooseberry is as a bush on a short leg (stem) of about 10cm from which all the branches emerge. Bushes need enough room to grow and also to make the fruits easy to pick, so leave 1.5m between them in each direction. Set plants into their holes so that the nursery soil line is level with the ground, and firm in as you fill. Container-grown plants simply need the top of the compost matching with the soil level. After planting, sprinkle a general purpose fertilizer such as blood, fish and bone over the surface of the soil.

Cordons can be planted much closer, giving you the opportunity to try a couple of varieties in a relatively small space. They will need wire supports – grow them up against a fence onto which horizontal, galvanised wires have been stretched at 30cm, 60cm and 90cm intervals from the ground. Tie the main stem of the cordon gooseberry loosely to a bamboo cane and tie this in to the wire supports. Leave 40cm between each cordon and 1.5m between rows.

While you will struggle to kill off a gooseberry, it will take a little attention to guarantee a bumper crop of up to 5kg per bush. Begin the season’s care by adding a fresh sprinkling of organic fertilizer in February, then topping up with a layer of organic mulch in March, taking care it doesn’t touch the stem. Making this last addition at least 5cm thick will improve moisture retention in summer months – essential to help the berries swell properly – and will slowly feed plants over the growing season as it rots down or is taken into the soil by earthworms.

Watering is important, especially in early summer when the fruits are developing. A sudden wash of water applied after a prolonged dry spell will see berries swell quickly to split the skins – a sure-fire way of increasing disease risk. From the end of May it’s advisable to remove about half the fruits to give the remainder enough space to grow on properly. The thinned berries needn’t be discarded – use them for cooking. This process may be completed in stages.

Plants require protection in two ways. First you may need to cover them over with horticultural fleece at flowering time to avoid frost damage. Draping the material over bushes will be all that’s required, but remove it by day so pollinating insects can do their bit. Birds can be a nuisance in some areas and will peck at mature berries. If you haven’t got a fruit cage to keep them off then support netting tightly over bushes. Weigh down the edges with stones so that blackbirds can’t creep in at ground level to snaffle your crop.

Gooseberries are relatively early to produce their haul of juicy berries. Thinning in May will give the first fruits, though this process can be carried out in stages until they are well spaced, allowing those that remain to get progressively larger. Mature goosegogs will be ready to take from June onwards, with the latest-fruiting varieties cropping in August. If you want to prolong your enjoyment of this obliging fruit then plant early, mid and late-season varieties to give the widest possible harvest window.

Dessert gooseberries are best picked minutes before enjoying them, when they will be at their peak of both flavour and goodness. However, they will keep for over a week in the fridge and gluts are suitable for freezing. When picking the fruits cut them free with the little piece of stem that joins them to the plant. If you simply rip them off, the skin will tear and the gooseberries will not keep for nearly as long. Your harvest can be used in so many ways – but it’s hard to beat the heavenly experience of fresh dessert berries folded into Greek yoghurt with just a drizzle of honey.

The object of pruning your bushes is to encourage a balanced, open structure and plenty of vigorous growth. This will in turn improve air circulation and reduce the opportunity for diseases such as American gooseberry mildew to gain a foothold.

Formative and maintenance pruning is best carried out in late February, just before plants burst into leaf. This has the advantage of keeping them naturally protected from bullfinches, which devour winter buds – the plants’ spines help to form an impenetrable barrier. A second, summer pruning around June to early July sees all new sideshoots reduced to just five leaves. This allows more light into the bush to help any fruits ripen, and maintains a healthy airflow.

Start pruning by selecting four or five of the strongest shoots on one-year-old bushes and reducing these by a half to three-quarters. Cut out any stems coming from the leg, and surplus growth back to where it is emerging. The nursery may have completed this initial pruning for you. The following February, cut back new growth by a half, aiming to leave eight to ten of the strongest branches in place to create a pleasing goblet shape to the bush. Prune back all other shoots to where they emerge, making cuts just above a bud. In subsequent winters, prune new growth back by half and cut out any excess branches to keep an open, even shape. Snip back laterals to two buds.

Cordons are pruned at the same time by reducing the previous season’s leader shoot growth by a quarter, which will stimulate more fruit-bearing sideshoots. Those from last year should be cut back to just two buds to maintain the columnar shape. 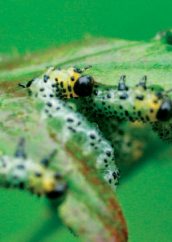 The commonest pest of which you need to be aware is the larvae of the gooseberry sawfly. They look like small caterpillars and appear from spring. Left uncontrolled, they will gobble through leaves, stripping them as they go to leave just the midribs intact. While this won’t cause any long-term damage to plants, it will severely compromise the final yield of berries you take, both in the year of attack and the following one. Gooseberry sawfly larvae are easy to identify: the pale green youngsters have many black spots and a black head. They can reach up to 2cm long, and emerge from clusters of small green eggs laid towards the centre of the bush.

The best form of control is to inspect bushes regularly from April onwards, picking off any larvae and eggs and destroying them. Always check the undersides of leaves as you inspect, as the pests are usually found lurking here. If you have lots of plants or do not have the time for regular inspections then you will need to spray with an organic pyrethrum-based pesticide as soon as you notice a presence. Better still, apply a safe biological control of nematodes. Nemasys Caterpillar Control works by spraying these helpful predators directly onto affected areas, with repeat applications every week until the ainfestation is brought under control.

Lack of air circulation can encourage the fungal disease American gooseberry mildew. Thankfully, this is completely avoidable given proper initial spacing of bushes, judicious pruning, and the selection of resistant varieties. Like most mildews, the symptoms of infection are a greyish-white powdery layer on the surfaces of leaves and stems, particularly on new growth, which can eventually die back. Berries take on a powdery hue, becoming brown.

This disease really is easily preventable by giving each plant enough room to grow freely and by pruning to ensure an open habit that encourages good air circulation around growth. Always remove congested branches to keep bushes in tiptop order and if mildew does strike, cut out the affected growth immediately and dispose of it well away from your plants. Feeds high in nitrogen can encourage excess, soft leafy growth, which is susceptible to mildew, so make sure you are applying a well-balanced organic fertilizer early in the year. The usefulness of selecting mildewresistant varieties such as ‘Invicta’ and ‘Captivator’ cannot be emphasised enough. 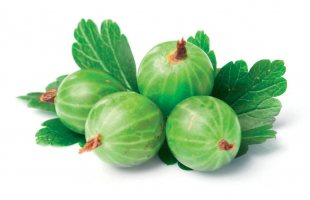