Recent developments mean you don't need a large plot to enjoy your own crop of these delicious fruits. Anthony Bennett explains the best way to plant a cherry tree this autumn

It wasn’t so long ago that cherries were considered a bit of a handful to grow. However, the development of self-fertile varieties, coupled with the relatively recent introduction of dwarfing rootstocks has transformed the trees into an attractive proposition for any plot. Today, gardeners-in-the-know have at least one cherry tree to produce a burst of glorious springtime blossom followed by a crop of mouth-watering, shiny, crimson fruits.

Cherries are broadly split into two categories, both of which are worth growing. Sweet (dessert) cherries are wonderful eaten fresh and make a great addition to your fruit bowl. Sour (acid) cherries are tart to taste when eaten raw but are perfect for cooking. These make great pie-fillers or the basis of a cherry jam, where sweet cherries would prove to be a bit too sugary.

For the heaviest yield of fruit per tree, grow the plants as free-standing bushes or, for a neat and compact habit, train them as wall-trained fans. The scion (upper section) of a cherry is often grafted onto the roots and lower part of another tree (the rootstock) to control the plant’s size and vigour. Common rootstocks for cherries include ‘Colt’ and ‘Gisela 5’. The latter is the sensible choice for smaller gardens as it limits the ultimate tree size to little more than head height, or less if carefully pruned. You can expect to pay a little bit more for cherries on a ‘Gisela 5’ rootstock, but it’s an investment well worth making.

Cherries flower quite early on in the spring – early April in the South and late April further north – and are therefore vulnerable to frost. For this reason, pick a sheltered position for your tree and one that’s out of any frost pocket. Sweet cherries always prefer a sunny site and the fruits will have the fullest flavour if this simple requirement is met. Acid cherries, however, will tolerate some shade, making them a very useful fruit for those difficult-to-fill northfacing garden walls. The plants prefer warmer weather, so will tend to perform better in southern counties, but so long as a sheltered position is selected and a hardier variety such as the Canadianbred ‘Summer Sun’ is picked, other areas will have some success.

Although it matters little whether your soil is acid or alkaline, cherries need a fertile and free-draining growing position, such as a sandy loam. Soil can be improved by adding plenty of well-rotted manure or compost before planting but it is harder to stop the ground from becoming waterlogged in wet spells. If the site you have in mind has become boggy or puddled in the past, pick another location that you know is safe. Prepare the spot about a month before planting by digging it over and adding your organic matter. This will allow the soil to settle back down in good time for the new trees.

Bare-root trees are best planted in late autumn, around November, while the soil is still warm but can be put into the ground any time up until early spring so long as your plot is not wet or frozen. Dig out a hole in your prepared soil and spread out the roots along the bottom so that they are not cramped. Container-grown trees may be planted throughout the year, but will need careful watering during the growing season to prevent a check in their establishment.

Free-standing trees will require a supporting stake for the first few years of their life. Drive this about 30-50cm into the ground just before planting and loosely attach your cherry to it using tree ties. This will stop it rocking back and forth in the wind and therefore prevent it from becoming unstable.

If you want to train your cherry into a fan shape then select a partially-trained specimen, which will have had a lot of the initial work completed. Position the tree into the ground so that it is about 22cm away from the wall and leaning into it. Next, carefully tie the branches onto bamboo canes then secure these to horizontal wire supports spaced about 38cm apart on the wall. The wire supports should be stretched taut into position using vine eyes to hold them out, clear of the wall. In both cases, make sure the tree is planted at the original depth it was at before and then water it in thoroughly. Take great care to keep the grafting union – where the variety joins the rootstock – above ground level.

While self-fertile cherries are happy growing on their own, yields will improve if another cherry of a different variety is grown nearby. Fruit nurseries or garden centres will be able to offer advice on compatible strains. As cherries flower early in the year, they may need protection from late frosts, so be prepared to throw a covering of horticultural fleece over them if cold weather threatens. Remove it during the day so that pollinating insects can reach the flowers. If you want to make sure that you get a good crop then give the bees a helping hand by gently teasing a paint brush into the centre of each flower to assist pollination.

Cherries do not need thinning but excessive fruit drop may occur if soil moisture levels decrease when they start to swell. Keep new trees and those with developing fruits well irrigated in dry weather to avoid any problems but ease off watering as the cherries near maturity when excessive moisture levels can cause the skins to split in much the same way as tomatoes.

The occasional explosion of aphid populations can affect young shoots. Encourage a healthy patrol of hungry predators, such as ladybirds and lacewings, by keeping a bank of wild flowers to the base of, or adjacent to, your trees. Each spring, apply a top-dressing of general-purpose fertiliser such as bonemeal.

Predictably, we’re not the only ones tempted by those attractive, shiny fruits, so some protection against birds, particularly blackbirds, will be needed. Drape netting over the trees well before the cherries near picking time and ensure it is taught so as not to trap any birds. Fruits will be ready for picking once they attain their final, rich colour – usually dark red. Most cherries will be ready for picking from about mid-June, gearing up for the main fruiting month of July. Pick cherries as they ripen, which will be over a period of several weeks. It is preferable to harvest them in the morning, while they are still plump and cool. Pluck, or carefully cut them, from the tree using scissors (recommended for acid cherries) so that each cherry has an accompanying stalk as this will significantly increase the length of time that the cherries will keep for. If rain is forecast and your fruits are ripe, pick them before their skins get wet, as otherwise they’ll split. Avoid handling the fruits, instead hold them by the stalk, to minimise the chances of bruising.

Eat dessert cherries immediately – you’ll be rewarded with a heavenly flavour – or store them in the fridge in polythene bags for up to a week, while browsing recipe books for delectable ways in which you can savour the sour varieties. Pies, puddings and jams are all popular, traditional choices for using up these delicious fruits. Alternatively, use up your glut by sharing your crop with fellow plot-holders.

Sweet cherries have slightly different requirements to acid cherries. Formative pruning of both is carried out in spring, usually around April. If you are growing your tree as a fan, leave any leaders (main branches) intact to grow on to form the framework, but rub out any shoots growing towards or away from the wall. In summer, pinch out the growing tips of any other shoots on sweet cherries once they have developed five or six leaves. After the trees have fruited, these can then be cut back to leave just three or four buds.

When branches of fan-trained acid or sweet cherries reach the top of the wall, prune them back to a weak lateral (side shoot). Sweet cherries grown as free-standing bushes are very easy to prune – simply cut away any dead, diseased, crossing or over-crowded wood to keep the tree healthy and open. Do this immediately after harvesting.

Acid cherries only produce fruit on one-year-old wood, so it is just the youngest shoots that are productive. It means acid varieties need slightly heavier pruning to stimulate plenty of replacement growth that will yield a satisfying crop. After harvest, a proportion of the older, fruited stems on fan-trained trees should be cut back to a replacement shoot. This can then be tied in to form next year’s fruiting stem. Freestanding trees should also have a proportion of older, less productive branches cut out to encourage new growth. In both cases do not prune wood older than three years or you run the risk of heavily wounding the tree. Seal cut ends with a tree paint to prevent the spores of fungi, such as silver-leaf, gaining entry. 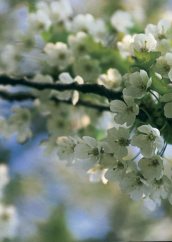 Gardeners new to growing cherries should take precautions to avoid an attack of bacterial canker. This disease of stone fruits, including plums, cherries and damsons, causes brown spots to appear on the leaves. The spots are normally surrounded by a pale yellow halo and, as the disease progresses, these develop into ‘shot holes’. Infected branches may exude a sticky, brown gum. The problem is caused by the Pseudomonas syringae bacterium, which gains entry through fresh cuts and wounds. The danger period is during autumn and winter, although symptoms won’t appear until the following spring when growth resumes.

Don’t fall foul of this disease. Be sure to carry out any pruning during the summer months and only during dry weather, when the chances of infection are minimised. Spray recently pruned branches with Bordeaux mixture in mid- August and then again in mid-September and mid-October to kill off any bacteria. Remain vigilant and, if canker does strike, cut out infected branches immediately and burn them, using a disinfectant-soaked cloth to wipe clean your pruning blade between cuts.

Just a few decades ago, if you wanted to grow sweet cherries you’d have had to plant more than one variety to ensure successful cross-pollination and fruit production. While this enabled a choice of cherries to tuck into, it isn’t ideal for small gardens where there might be space for only one tree. Furthermore, crosspollinated cherries require dry weather conditions so that bees, which perform the task, can move easily between blooms.

Today’s self-pollinating varieties have solved this problem, giving greater flexibility and enabling anyone to grow these mouth-watering fruits. Flowers of self-fertile cherries are less dependent on the weather, still set fruit in areas of low bee populations and consistently produce the highest number of fruits possible. Development began in Britain but it was from the agricultural Summerland Research Institute in Canada that the first named self-fertile cultivars were developed. ‘Stella’ was born in 1956 and introduced to growers 12 years later. It went on to spawn other modern favourites including ‘Lapins’ and ‘Sunburst’, and coupled with modern rootstocks has helped revive the fortunes of the cherry industry in this country, while single-handedly making the tree enormously popular with home-growers. Further developments have seen the average fruit size double. 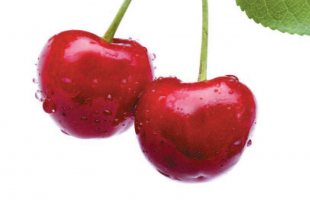