There are few veg that remain enormously productive in the face of extreme cold and exposure. But spring cabbages sown now will stand their ground to provide you with delicious home-grown

There has always been a degree of confusion with first-time veg gardeners when it comes to cabbages, over which ones should be grown for when. Essentially there are four different types, identified by the time of year when they are harvested: spring, summer, autumn and winter (savoys). But because not a lot of actual growing can take place during the depths of winter, the sowing and planting times are not equally spaced throughout the year.

Mid- to late summer is the time to sow spring cabbages. Our fathers and grandfathers would have identified these cabbages a mile off as traditionally they had pointed heads, but these days there are round-headed types as well, and increasingly they are being grown purely for spring greens – that is, we harvest them as immature leaves, before they have hearted up. There are some leafy varieties, such as ‘Wintergreen’, that are bred just for this purpose.

Regardless of the shape and use of your spring cabbages, you cannot deny their value as a healthy vegetable. They are rich in beta carotene and vitamin C, and the outer leaves contain a high proportion of vitamin E.

To grow the best-hearting cabbages you will need a firm, well-consolidated soil that has not been freshly manured. That means digging over the ground several months prior to planting and adding plenty of well-rotted manure or compost as you do so.

My greatest successes always seem to come when I plant young cabbages in ground that hasn’t been dug for 10 months. For example, this month I’ll be planting young spring cabbages in soil that was dug back in November; plenty of well-rotted manure was incorporated at that time and the soil was then used variously for legumes (peas, beans) or leafy salad veg. Now that it’s time for growing cabbages on that ground, any excess nitrogen within the manure has dissipated, leaving behind solid, fertile soil that’s high in humus content (essential for good plant growth).

Cabbages do best in a soil with a pH of 6–7. If the soil is too acidic (less than 6), it is important to put down lime a month or so before planting to balance it out. If your soil is sandy, apply ground limestone at the rate of 200g per 1m2; use 50 percent more on loamy ground and 50 percent more again if it is clay. These quantities should raise the pH level by one point or so.

Clubroot thrives in damp, acidic conditions, so the soil should be free-draining to help ensure it doesn’t become a problem. If needs be, improve the drainage by adding a 45cm depth of shingle. Good crop rotation will also help to prevent the build-up of clubroot and other soil-borne problems.

You should get spring cabbages underway from mid-to late summer (the young plants should be transplanted during early to midautumn). Sow the seeds in a nursery bed outside (to save space on the plot proper) or use trays or modules under cover.

If you’re sowing outdoors, put down a garden line (a string between two pegs will do) and use it as a guide for creating a drill 1cm deep, using a draw hoe or the corner of a sharp metal rake to do so. Water the row using a can with a fine rose end attachment then sow the seed thinly along it. Lightly rake the drill, knocking the soil back over the seeds, and gently tamp over the area with the back of the rake. If you’re sowing multiple rows ensure there is at least 15cm between each one. After germination, thin out the seedlings to 8cm apart to prevent them becoming weak and spindly due to overcrowding.

If you’re sowing in trays or modules fill them with seed compost to within 2.5cm from the top. Lightly sprinkle the seeds on the surface, cover them (preferably using a wide-mesh sieve) with 1cm of the compost, and water.

However they are sown, transplant the seedlings to their permanent position when they are 10cm in height and have grown five or six leaves. If you’re transplanting from a nursery bed, water the rows the day before. This will soften the soil, aiding lifting and minimising root and stem damage. If you don’t get around to sowing, garden centres are increasingly stocking young plants at this time.

For traditional hearting cabbages, the young plants should be spaced at 25–30cm intervals in the row. For spring greens, grow the leafy purpose-bred varieties 20–25cm apart, or space normal spring cabbage varieties just 10–15cm apart and harvest the leaves while they are immature. In all cases the rows should be at 25–30cm spacings.

Late summer temperatures are quite important for these cabbages. For example, they tend to be at their best in the 15–20°C range and will suffer if transplanted when the weather is above 25°C. Remember, these plants are hardy, being able to survive the winter, and in trials have stuck it out at -10°C.

Firm planting is important, so don’t be afraid to really press down on the soil around the transplanted seedlings, but be careful not to damage the stem. Water the young plants straight after transplanting and again every few days until they are well established – this means for the first couple of weeks or so. Straight after watering it is wise to place felt discs around the stems of the plants to help avoid attacks from cabbage root fly .

Spring cabbages are ready to harvest from mid- to late spring, when the heart is firm to the touch. They should be used straight away – they do not store well (unlike Dutch winter white and some red cabbages which can be stored for several months in a cool, frost-proof shed).

If you don’t immediately need the ground on which the cabbages are growing for another crop, you can produce a second harvest from the stumps – but the cabbages need to be growing in good conditions and be generally healthy. Start by harvesting the main cabbage; slice the head cleanly from its stalk, using a sharp knife and making the cut some 5cm or so up from the ground. Then cut a cross shape 1cm deep into the stump. This will sprout a cluster of smaller cabbages.

If the ground is needed straight away for a crop of something else, harvest spring cabbages by lifting whole plants with a fork. Cut off the roots and stem, and remove the coarser, yellowing or damaged outer leaves.

If you have a glut and can’t use all your spring cabbages quickly, they can be frozen – but only freeze fresh heads of the best quality. Wash and coarsely shred the cabbage, then blanch it (quickly immerse it in boiling water) for about a minute. Dry it and pack into polythene bags or rigid plastic containers. 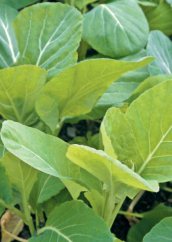 Spring cabbages are at risk from these pests – but because planting takes place in early autumn, and the fly population is at its peak in spring and summer, the risk is not as great as with other season cabbages. Young plants are most vulnerable, especially after transplanting when they can quickly perish. Currently there are no insecticides available to amateurs for the control of this pest.

White, legless maggots up to 9mm in length eat fine roots until just a stump is left, causing slow growth and wilting on sunny days. The maggots can also turn their attention to radishes, swedes and turnips.

Adult flies lay their eggs in the soil close to the plant, and the best control is to use discs made of weatherproof roofing felt (or carpet underlay, or even cardboard). These should be about 10cm in diameter, with a hole in the middle and a single cut through the radius. When placed around the young cabbage stems, the female fly will deposit her eggs on the disc instead of the soil, and they will dry up before they get a chance to hatch.

One of the main pests of cabbages is the caterpillar of the cabbage white butterfly, although the period of risk for spring cabbages largely falls in the first few weeks after planting, before the weather gets too cold. It is thought that the butterfly is repelled by having the following edibles growing nearby: tomatoes, celery, sage, rosemary, thyme, mint and hyssop. 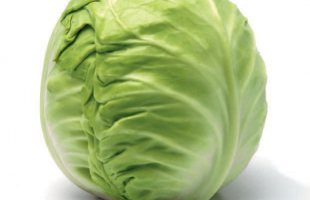