Even months of almost total neglect are unlikely to deter this hardy plant from producing its delicious, tender stems. Anthony Bennett explains all about the brightly-coloured crop

Few crops are as carefree as rhubarb – a perennial plant that will provide loyal service year after year. Hailing from Siberia where harsh conditions and extreme temperatures are the norm, it has a somewhat easier time in British gardens and allotments. Here, clumps of rhubarb almost seem to take care of themselves, lying forgotten in the corner of a plot yet continuing to provide tasty stems year after year to add a gentle tartness to puddings and crumbles. But with very minimal effort they can offer even more, providing the first crop of the new year and having it be of the sweetest, most tender stems – a million miles away from what was contained in the eye-watering school puddings so many remember. This, combined with the attractiveness of its bright pink- or redflushed stems, means that it is a plant virtually every kitchen gardener should consider growing.

The two main considerations you should have in mind when preparing the ground for rhubarb are its ultimate size and the length of time it can be expected to occupy the space. It will keep on producing succulent stems for at least 12 years and with regular lifting and dividing – like any other perennial plant – a clump can occupy the same ground almost indefinitely. Don’t think you can squeeze a plant into a tight space when realistically the stems and leaves will grow out 60cm from the centre of the plant in every direction.

Choose a sunny or partially-shaded spot, preferably in a separate bed away from other veg (rhubarb is a vegetable, it’s just usually eaten as you would a fruit), as the generous leaves can overshadow other plants while providing a convenient hiding place for slugs and snails.

Thoroughly work over the soil at least a month before planting. Dig down two spade’s depths (about 60cm) so that the roots will have plenty of good, loose soil to explore. Remove any stones and weeds then incorporate masses of organic matter where each plant is to sit.

Rhubarb is usually bought as one-year-old plants, or crowns, which come from healthy, disease-free stock. Most nurseries and kitchen garden suppliers will have at least a couple of varieties to choose from (see box overleaf) and you can rely on them for good, clean specimens. The best time to plant these crowns is from November through to early March, as long as the ground is workable and isn’t frozen solid. Alternatively, pot-grown rhubarb can be planted at any time of the year but it will need plenty of watering if you’re going to set it into place during a warm summer.

Dig a hole in your prepared site, slightly wider and deeper than the crown. Carefully lower in the young plant and fill in around it with the enriched soil, firming in as you go with the heel of your boot. It’s important that no air pockets are left, as they can cause the plants to dry out and make them slower to establish, so feed in the soil meticulously. The tip – or bud – of the crown should be at or just below the final soil level – certainly no deeper than 2.5cm, otherwise it may struggle to break through. On heavier soils, make sure the tip of the crown is (just) poking proud of soil level to prevent water puddling around it, which can lead to rotting. Thoroughly water in new plants to settle the soil around them.

It is worth growing up to four plants to provide a continuous supply of winter-forced and summer-cropped stems. They should be spaced at least 75cm apart and as much as 1.2cm for some of the larger and more vigorous varieties.

Rhubarb will benefit from a generous mulch of organic matter each spring, just before the buds break into full growth. Add a 2–5cm layer of homemade compost, leaf mould or well-rotted manure around the crown of the plant, taking care to leave the buds themselves clear. Autumn or winter-planted rhubarb will quickly set into growth in the spring but, being greedy feeders, will need supplementary fertilisers throughout the first summer. Any organic liquid feed will do the job and this little bit of TLC will reap benefits as the plants quickly establish. In subsequent years, repeat the early spring mulching to lock in moisture and sprinkle over a nitrogen-rich organic general fertiliser later on in the summer to keep momentum going.

Plants can also be ‘forced’ (see box) – growing them in darkness and therefore coaxing crowns into early growth before they would naturally do so if left to their own devices. The resulting stems – taken in summer – are much sweeter and tender than those left in the light – making the extra effort involved more than worthwhile.

Once it is established, there really isn’t much to do to keep rhubarb going strongly, so long as the annual mulch and summer feeds are provided. Even weeding won’t be a problem as the gargantuan leaves smother practically anything growing nearby. Young specimens may, however, require additional watering in dry summers, which is important as they establish.

In spring, plants will send out flower shoots which need to be cut away at the base as soon as they are spotted – allowing plants to put energy into flowering will weaken the crown and reduce yields. Also remove any yellowing or dead leaves to ensure enough air can circulate around the plants, and to reduce both the likelihood of disease build-up and the number of potential hiding places for slugs. Cut away old leaves at the end of the growing season once the top growth has died back.

Clumps of rhubarb should remain highly productive over many years but as they expand the centres will become less so and the outside stems will get overcrowded and drawn. Keep plants performing well by lifting and dividing them every five years. Wait until all the leaves have died back (usually by late autumn) then dig out each clump, working your way around it with a spade and levering it out from the soil. This can be hard work, especially when you’re tackling a long-established clump, but the reward in subsequent yields is certainly worth it. Now take the clump and slice it into two or three pieces with the spade blade. Don’t be shy – a good hard stab will be needed to cut right through. Discard any unproductive centres and replant only the healthy and more vigorous outside pieces. Each one should have a good section of roots and at least one fat bud – but preferably two or three. Replant the pieces as you would new crowns, in enriched soil and at the appropriate spacings.

It can be hard to resist taking a harvest of rhubarb stems the first summer after planting, but for the best results it is better to leave well alone. The initial 12 months are about establishing a good root system and bulking out the young crowns, in much the same way as asparagus should be left to develop for a few years.

In the second summer you can take two or three stems per plant, as long as you leave at least five in place. By the third year, once the clump is a good size, harvest half the sticks at a time, leaving the others to power the clump to produce further fresh stalks. They can normally be taken from May to August, although the earliest varieties may produce tender stems as soon as April in a warm spring. Forced stalks can be cut from December or January.

To harvest a stem simply slide your hand down it as far to the base as you can then smartly twist it away from the crown to snap it off. 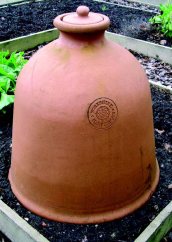 If you want super-early stems of rhubarb, you can ‘force’ them to start into growth sooner than normal. Not only will it speed the sticks to harvest, they will be smoother and less stringy, as well as offering a sweeter and more delicate taste.

For a super-early crop, lift vigorous plants from the ground in November or December. Leave them on the soil surface so the exposed roots are subjected to cold weather, which will ‘break dormancy’ early. After a week or two, ideally after a frosty spell, plant the clumps into old potting compost and bring them into a greenhouse or shed. Exclude all light, by placing an upturned bucket over the top and draping it with black polythene or similar to exclude every last ray of sunshine. This combination of darkness and warmth will immediately stimulate the buds into growth and a crop of fresh, pale stems can be enjoyed just a few weeks later. Replant the crowns into prepared soil and leave them to build up strength again over the next few years.

Alternatively, to force clumps in situ, simply place a bucket or one of the more decorative terracotta rhubarb forcing pots over clumps in January or February, adding straw or rotting organic matter around the bucket or pot to further raise the temperature in particularly cold weather. The darkness and extra warmth will be enough to bring on growth.

Rhubarb is grown commercially under cover of darkness in an area of West Yorkshire known as the ‘rhubarb triangle’. Here, in a tiny part of the county, nine square miles in size, giant forcing sheds bring on early stems of the tenderest texture in the depths of winter. The triangle sits between the towns of Wakefield, Morley and Rothwell and enjoys the perfect conditions for growing rhubarb: rich earth, high rainfall and a ready supply of soot and ash for soil conditioning. The plants are brought into the sheds after a couple of years in the ground and then given gentle heat to coax them into early growth. The stems are harvested by candlelight to avoid any excess light spoiling the quality. Remarkably, if you’re patient enough, it is possible to actually hear the rhubarb growing as the fat buds break through and develop into stalks. 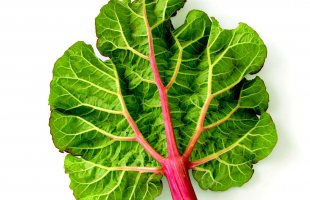