We might have suffered another dreary summer but it won't have mattered a jot to these plump, juicy fruits. They're soft and squishy off the plant but on it they're resilient and care-free – as long as you get them off to the right start

They might play second fiddle to their Wimbledon-associated cousins on shop shelves but on the plot there should be no such bias – raspberry plants crop reliably year-after-year and ask for little in return. They even thrive in partially-shaded areas where few fruit or vegetables would grow. And such is their hardiness that they will produce a bumper crop of their sweet, mildly acidic fruits even in disappointing summers – a valuable trait given the last few we’ve experienced. They’re a great choice for those gardening in cooler, northern climates – as they flower late in the spring there is little danger of them being damaged by late frosts.

There are two types of raspberry available to the kitchen gardener. Summer-fruiting varieties will crop at any time from the beginning of July to early August on stems of last season’s growth; autumn-fruiters bear their berries over a longer period – from mid- August to the first frosts – on the current season’s stems. Both are similarly easy to care for but require slightly different pruning techniques. As long as you know how to wield your secateurs around them there’s little mystery to growing these fruits and their length of service – up to 12 years – means they give a lot back in return.

Like most edible crops, raspberries produce a better yield when grown in full sun. However, thanks to their woodland origins, they can be grown in a degree of shade too, as long as they receive at least a few hours of direct sunshine each day. They prefer slightly acidic soils, which is great news for gardeners who struggle to grow plants in these conditions. They like it to be moist as well, so be prepared to water the plants as they establish – but beware of waterlogged winter ground.

Turn the soil over and remove any weeds, especially perennial types (such as bindweed and horsetail) and their roots. They are also heavy feeders, so for every plant you intend to grow incorporate a bucketful of wellrotted manure or compost while digging, turning it all into the soil. Ideally soil preparation should be complete a month before planting; at the very least you should allow two weeks to give the earth time to settle.

With a well-prepared growing area in place, planting shouldn’t present any difficulties. Buy in certified disease-free, one-year-old plants (usually called canes) from a reputable nursery or mail-order catalogue. They are usually acquired bare rooted, packaged up into bundles ready for planting. The best to time to plant them is in the autumn, from October through to early December, as the soil still retains a degree of warmth which will help the roots to grow and quickly settle the new introductions into place. If this isn’t possible they can, however, be planted any time up to March.

Position each cane into a shallow hole about 22cm wide and 7cm deep, spreading the roots evenly across the bottom. Backfill and firm in around them as you go, making sure that the soil mark on the canes is at least level with the surface and up to an inch beneath it – this will encourage extra root growth and quickly anchor the plants into place. Space them 45cm apart within the row, leaving 1.8m between further rows to allow room for the roots to spread sufficiently, and enough space for picking.

The tall, gangly canes will need to be held upright, so set up a suitable support system at planting time. The best system is a simple post-and-wire set-up – hammer in two sturdy, 2.4m-high posts at either end of the row, 60cm into the ground and 3m apart. Stretch three galvanised wires horizontally in-between them at heights of 75cm, 1m and 1.5m. You can omit the top wire if you’re growing an autumn-fruiting variety as they are sturdier and require less support.

Immediately after planting your canes, cut each one just above a bud so that they’re 30cm in height. By spring, new shoots will appear from the base of the old cane and these will need to be tied into the wires as they reach them. The original cane can be cut right down to about 3cm above ground level at this point, again just above a bud. Remove any weak shoots in this first summer and any appearing more than 20cm from the row. Be disciplined and remove any flowers that develop in the initial season too – the object of the first year is to establish a good base. Allowing plants to channel energy into setting fruit will compromise this effort.

In the following years pruning is simple, although it’s important to use the correct method depending on whether you’ve opted for summer- or autumnfruiting varieties. The former should be cut right back to ground level as soon as they have finished cropping. At this stage there will already be plenty of new growth at the base of the plant and these will be the fruiting stems for next year. Tie them into your support system using garden string, so that each stem is spaced around 10cm from the last. Cut down any spindly stems or those growing away from the row. Towards the end of the growing season, loop over and tie in place any really tall stems to prevent them falling over in the wind over winter. In early spring, before growth commences, cut them back to a bud about 15cm above the top wire so that they are uncluttered and in a good position when they start fruiting.

Pruning autumn-fruiters is much more straightforward – just cut back all of last year’s canes to ground level before growth starts in February. New shoots will appear from the base by spring and these should all produce berries on the upper stem sections by late summer.

Feeding and watering are pivotal to the success of a raspberry crop. Keep your canes moist and well-fed and, coupled with the correct pruning regime, you should be carrying away punnets full of berries. Watering is particularly important at flowering time, as well as when the fruits are swelling and during dry spells.

Applying a thick layer of organic matter as a mulch in early spring will help to lock-in moisture (make sure the soil is moist beforehand) as well as feed the canes. Be generous – make it at least 5cm deep and more if you can spare it. Any well-rotted organic matter such as compost or manure will do but avoid adding mushroom compost – it is alkaline and therefore unsuited to the acidloving plants. Mulches will also help to nourish the soil and stifle weed growth. As raspberry roots are very shallow and can easily be damaged by hoeing, any weeds that make it through the mulch will need to be removed by hand.

New shoots that appear away from the main row or post are called suckers (see propagating raspberries box, right). It will be difficult to tie them in to the support system – instead you should remove them by lifting them out of the soil, then use secateurs to sever them from the parent plant below ground level.

Be on the watch out for birds – netting will prevent damage from hungry beaks and can be draped over plants at fruiting time. Fruit cages, however, offer the ultimate protection and are a worthwhile investment if you’re growing more than just a few canes.

Summer-fruiting raspberries are further divided into approximately three groups: early season, which crop from the beginning of July; mid-season, starting in midto- late July; and late season, which only gear up to fruit in late July or early August. The summer-fruiters each have a short but intense harvest window; autumn-harvested varieties crop for much longer (mid-August to October).

Pick the berries once they have fully coloured up – the main body of the fruit should detach easily from the plant, leaving the pithy core behind. Eat them within a few days and take great care not to bruise them, which will only shorten their already brief storage life. The fruits won’t all be ready at the same time, which makes the issue of storage less of a problem. However, any excess can be frozen – freeze them first on trays so they are not touching and can easily be pulled apart, then pour them into freezer bags to store for up 12 months.

The yield per plant will begin to tail off after about eight to 10 years and rows will need replacing entirely after about 12. It is likely canes will be virus-ridden and unsuitable for composting by then. Take them to the local recycling centre for disposal and replant new plants in an entirely different piece of land. 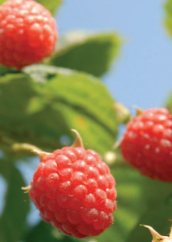 Suckers are simply new shoots that appear too far from the main stem to be of any use – they cannot be tied into place and would spoil the overall balance of the plant. Instead, they should be eased out of the soil and cut away. However, the suckers are still vigorous young shoots and would fruit given the opportunity. So if you want to bulk up your existing stock, they offer a convenient and low cost method of doing so. Wait until the autumn, then carefully dig away the soil from around a strong-looking sucker, lift it out, then replant it into prepared ground where you want the new plants to grow. Water it in thoroughly and care for it in exactly the same way as a newly-planted one-year-old cane. One word of caution – only propagate in this way from plants that were originally bought in as certified disease-free stock.

If you thought the choice of raspberry varieties was plenty enough, then you’ll be bowled over by the many ‘hybrid’ berries that have been bred using them and associated crops such as the blackberry and dewberry. Many of today’s soft fruits owe their existence to the work of breeders over the last century who experimented by crossing different types to create new hybrids with different-shaped fruits, flavours and habits.

The most common hybrid berry is the tayberry, a simple cross between a raspberry and a blackberry, which forms long, flavoursome fruits on restrained stems. Others include the loganberry (another raspberry-blackberry cross), boysenberry (loganberry, blackberry and raspberry), hildaberry (boysenberry and tayberry) and silvanberry (a cross of many types including loganberry, youngberry, marionberry and boysenberry – pictured, and available from Ken Muir).

These hybrids grow in a similar way to summer-fruiting raspberries, producing fruit on the previous year’s stems. The usual support system is the same as blackberries – stems are tied into evenly-spaced horizontal wires, with the current year’s fruiting stems trained to one side, and the new growth that will bear next year’s crop tied in to the other. Pruning is the same as for summer-fruiting raspberries, with new stems tied in to replace the cut-away ones that have just fruited. 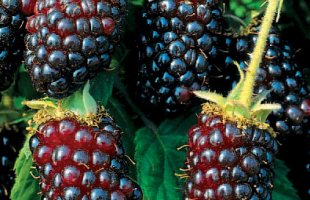