Their rich tones, seductive succulence and full-on flavour make plums, greengages and damsons real winners. And with dwarfing rootstocks and self-fertile varieties to try, just about anyone can grow these crops, says Anthony Bennett

Few trees better epitomise the glory of growing your own fruit than plums. These sweet, dusky crops are bursting with juicy goodness – a succulent treat at the end of a long summer spent patiently watching them swell and colour.

Once popular throughout Britain, these irresistible fruits were the highlight of the harvest. Following a period of decline, they are now seeing a comeback, as gardeners clock on to their exceptional flavour and heavy-cropping habit. Dwarfing rootstocks, coupled with a tempting array of self-fertile varieties, make these among the easiest tree fruits to grow, with both eating and culinary types available for a wide range of delicious uses. The popular ‘Victoria’ plum is still hard to beat, but other varieties bring to light the only difficulty in growing these trees – which one to pick! Greengages are closely related to plums but are slightly smaller and usually green or yellow-green in colour. They are exceptionally delicious and well worth trying. Damsons are simply cooking plums which have a slightly sharp taste – ideal for pies and jam-making. Also look out for bullaces, a decorative variety with much smaller, sharper fruits that are also good for jammaking enthusiasts.

Whatever you decide to grow, bear in mind the tree’s ultimate size (take note of the rootstock it is growing on) so that it will stay manageable. Given a sunny spot it will produce its sweet fruits for many years to come.

All plums need the same requirements – a warm position in full sun, with soil that is free-draining but relatively moist. These trees are early flowering, so avoid frost pockets where cold air could collect and damage the blossom. Shelter trees from wind and if you are growing in a colder part of the country, site them against a warm, south-facing wall or fence and select a later-flowering variety such as ‘Marjorie’s Seedling’ or ‘Czar’.

The rootstock a tree is grafted onto will determine its ultimate size. The most common rootstock is ‘St Julian A’, which will give an ultimate height and spread of up to 3.5m, though pruning can limit size well before it reaches these proportions. If you have a small garden, opt for a plum grown on a ‘Pixy’ rootstock, which gives a final spread of 2.5m in each direction. Also bear in mind pollination requirements. Varieties that are not self-fertile (able to pollinate themselves) will need a partner that flowers at exactly the same time – fruit nurseries will be able to advise on compatibility. For a sure result or if you only have room for one tree, choose a self-fertile variety – you’ll be spoilt for choice.

Prepare the ground for planting at least a month beforehand by digging in generous amounts of compost or well-rotted manure. Also sprinkle over a good handful or two of a slowrelease organic fertilizer such as bonemeal. Allow the ground to settle before planting. Preparation for bare-rooted trees can begin as soon as August, as the plants are ready for delivery in autumn.

Plums in containers will be available year-round from garden centres and these may be planted at any time. Bare-root trees are supplied ‘naked’ – in their dormant stage and without a container. These may be planted only during the dormant period, which usually runs from October to March. In both cases the very best time to plant is in October while the soil is still warm from the summer and there is plenty of autumn rain to settle in new introductions.

Begin by digging a hole that is wider than the root system of your tree and spread the roots out evenly along the bottom of the hole. The object here is to match the original soil or compost level of the tree with the existing ground level. This will be obvious for container trees; for bare-root types look for the soil mark on the bare trunk. In both cases the union – where the scion (the main part of the tree) and rootstock meet – should be at least 5cm clear of the ground. Fill back the earth and firm it in as you go by pushing down with the heel of your boot to remove any pockets of air.

Free-standing trees will need a sturdy support. Tie the trunk to a stake using proper tree ties, taking care that they are not too tight so as to bruise the delicate wood. Wall-trained trees will be grown as a fan, spread out against the stone or brickwork. Set into place horizontal supporting wires for fans, spacing each one 30cm apart. Plant fans about 25cm from the wall so the roots won’t be shadowed from rain. Angle the tree towards the wall and tie in the branches to the wires using soft string.

Should recently-planted trees be heaved out of the ground by winter frosts, you will need to ease them back into position. Other than that, newly planted plums will need to be kept well watered during dry spells. Wall-trained trees require more water than free-standing specimens.

Keeping the base of the plant weedfree is also important and a thick mulch of organic matter applied in early spring will help to both lock-in moisture and slow the progress of weeds. Spread a mulch about 5cm thick out to the edge of the tree canopy, keeping the mulch clear of the trunk. An organic, slow-release fertilizer should be applied just before laying it.

Plum trees are prone to biennial bearing – where plenty of fruit is produced one year only to be followed with none the next. Don’t let this happen! Judicious thinning of the developing fruits will ensure a consistent year-to-year crop, while helping those plums that remain to attain the fullest depth of flavour. Complete an initial thinning as soon as the fruitlets appear, then another thinning at the end of June to leave about 5-7cm between each plum. In this way you will get a decent crop every single year – late frost allowing!

The only other regular job is to cut away suckers. These are upright shoots that appear from the ground, away from the main trunk. They come directly from the rootstock and will not be of the variety you have planted, so need to be removed. Cut them back to below ground level or, preferably, dig out the soil to pull them away from the roots.

Wasps have a particular penchant for plums. If you know the pests are prevalent in your area then set up traps from early July. These may be home-made from plastic, two-litre bottles – cut across the neck and invert this to create a funnel. Seal the funnel onto the body of the bottle and fill with sugary water.

Hang the traps up in the tree canopy. The insects will fly in but are unlikely to be able to escape. Their frantic buzzing will attract other wasps to the trap and away from the fruit. You will need to empty these traps from time to time and recharge them with fresh sugar water. Plums will be ready to pick once they become fully coloured. They will smell ripe and juicy, too. Pick them along with their stalk and go over trees at several intervals so as not to miss any of the fruits. Plums and damsons destined for cooking or bottling can be harvested when slightly under-ripe. The earliest of these fruits will be ready as soon as August, with picking continuing on into October. Enjoy your plums fresh, or turn them into chutneys, jams, pickles, pies, wine and more – the options are as plentiful as the crop you’ll hopefully pick! 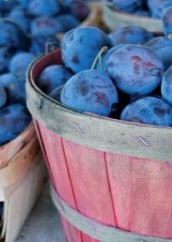 Most aphids are more of a nuisance than a serious threat; while they are unsightly they are not likely to cause serious long-term damage. One that may cause a problem is the ominously-named plum leaf curling aphid. This pale yellow-green pest sucks the sap from leaves, causing them to crumple and curl up, leading to slower overall tree growth. You are most likely to see the aphids early on in the season, in about May or June, before the winged adults migrate to other host plants, only to return in the autumn to lay overwintering eggs.

A two-pronged attack will bring this pesky aphid under control. If they become a problem then consider ordering in some lacewing larvae, which will hungrily devour the pests. These can be bought as a biological control from Gardening Naturally (01285 654 241, gardening-naturally.com). You can try to attract them naturally by planting plenty of yellow and orange, nectar-rich flowers such as calendula, as well as umbellifers like the white lace flower, Orlaya grandiflora or the stunning cut flower, Bupleurum griffithii. In winter, spray the naked branch framework with a winter wash. 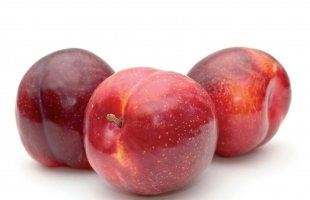