If you crave something new then Oriental leaves could be the answer. Anthony Bennett explains how these speedy salad and stir-fry ingredients can be sown right now

Anyone who has had the pleasure of travelling to countries such as Japan or China will appreciate the bewildering but totally delicious array of vegetables on offer there. A plethora of differently shaped, textured and coloured Oriental leaves brings Eastern cuisine alive. No wonder the Japanese have no problem reaching their official recommended intake of not merely five, but 17 portions of fruit and veg per day!

While us Brits share a similar climate to parts of the Orient, we’re perhaps less inclined to enjoy such a varied diet of fresh produce. This is a huge shame but is slowly changing for the better. Inquisitive palates and a thirst for new culture have seen Oriental food take off over recent years. However, while there’s no shortage of tempting recipes to try out, sourcing the many vegetables and salads required can prove a challenge – unless you grow them yourself.

Oriental vegetables not only consist of the now commonplace pak choi and Chinese cabbage, but incorporate a wide range of crunchy and nutritious greens such as Chinese broccoli, peppery mizuna, chopsuey greens (an edible type of chrysanthemum), komatsuna (a spinach-like leaf), hot mustards and just about anything in between. The home grower looking to expand his or her repertoire will relish the chance to discover this wonderful family of vegetables. Start experimenting with flavours by sowing a few varieties today; and you can keep on picking right through autumn and into winter

The vast majority of Oriental vegetables are members of the brassica family – the same group of vegetables as our humble cabbage and Brussels sprouts. With this in mind it is best to keep them with other brassicas in a crop rotation, as all these plants will prefer the same soil and protection from pests. Fortunately most Oriental vegetables actually perform better if they are sown from the second half of summer and on into early autumn, opening up considerable scope for them to follow on from earlier crops.

Beds should be prepared in spring by digging in a dressing of manure or compost, which is then allowed to settle. If you are following your Oriental vegetables on from a previous crop then fork over the soil and apply a general purpose organic fertilizer before raking down to a fine tilth. Suitable options include blood, fish and bone or concentrated chicken manure pellets, which will encourage the lush, leafy growth you are looking for in most of these vegetables.

This quick-growing band of brassicas prefers a site in full sun. Make sure they receive one with an open aspect free from the lolling growth of more boisterous crops. This will give slugs fewer hiding places and make it easier to keep them under control.

The many different varieties of Oriental veg will have subtly different sowing requirements but are broadly started off in a similar way. For more detailed instructions relating to the particular variety you select, be guided by the details on the seed packet. The following guidelines apply to the majority of Oriental leaves.

Most of these brassicas prefer to be sown directly into the soil as they hate root disturbance, which can lead to a crop running to seed, or bolting. Place seed 1cm deep into prepared soil. The best time to do this is from July to September, staggering sowings by a couple of weeks to encourage an even progression of harvests. Make a drill by stretching a stringline to get a straight row, then draw a cane or hoe along the string to the required depth. Multiple rows will need to be spaced a suitable distance apart – for Chinese cabbages leave about 60cm and for pak choi, 45cm. Now scatter the seed very thinly along the drills before covering them back over. Water along the rows to settle the soil back in place. It’s worth sowing a number of different types of Oriental vegetable on each occasion as they grow so fast, but don’t forget to label the rows clearly so you know what’s what – relying on memory alone can lead to confusion when it comes to harvest time!

If you still have crops in the ground that will soon be lifted you can start your veg off in modules or coir pots to grow on until the ground is free. Modules will cause minimal root disturbance at planting out time, as the complete plant can be carefully slipped out without upsetting the delicate roots. Sow a small pinch of seed per cell and cover them over with a centimetre of multipurpose compost. Thin them on germination to leave just one or two seedlings per module.

Direct-sown Oriental vegetables will likely need to be thinned. Again, final spacings depend very much on what you are growing. Thinning in stages allows the seedlings to be enjoyed as fresh salad leaves or as tender stir-fry ingredients. Each stage will see progressively bigger leaves until the final plants are large enough to be enjoyed as intended.

Thin both Chinese cabbage and pak choi to leave final spacings of 30cm between plants within their rows. All the while keep the soil moist so as to encourage quick, stress-free growth that is less likely to see crops bolt (run to seed).

Module-raised seedlings will get away very rapidly and will be ready to plant out just two to three weeks after sowing. Finish raking the vacant ground to a fine tilth and make sure it is top-dressed with some of that organic general purpose fertilizer before planting. Carefully remove the veg from their modules and plant each one individually using a hand trowel. These young crops can be set at the same final spacings as direct-sown plants, or positioned in a grid formation, leaving 30-45cm between each one, depending on the variety. The space between plants may seem excessively generous but they’ll quickly fill out and the bare earth between plants makes it easier to spot and despatch slugs.

Oriental vegetables are well-known for their fast growth, making the kitchen gardener’s job substantially easier. Keep the plants growing steadily by watering in dry weather, and hoe off any weeds that appear to reduce competition for your crop. You’ll need to keep an eye out for the most common pests, but vegetables grown in late summer and autumn will at least be free of the main rush of insects such as flea beetle, which so often attack earlier on in the season.

Pick off any of the older leaves that turn yellow or become infected with brown blotches of fungi. Regular sowings mean that as old plants become less productive or finally bolt, there will always be something to replace them.

Chinese cabbages can sometimes appreciate a helping hand to get their dense, white hearts to form. Should the leaves show little sign of filling out, simply lift up the outer leaves and tie them together to form a loose head of cabbage. The interior leaves should bulk out the heart within a few weeks.

Many hardy varieties of Oriental veg grown from a September sowing will sit through much of the autumn and can be overwintered. If you plan to see them through the colder months, position cloches over the rows as soon as the weather turns cool and wet. Later sowings will grow stronger if they are sown into cold frames or kept under cover in a greenhouse.

Oriental leaves can be split into two camps for harvesting: those that are cut in one go for their complete head or rosette of leaves, and those that are removed one leaf at a time as needed (these include the cut-and-come-again mixes of leaves).

Cut-and-come-again vegetables such as mizuna and mustard greens can be harvested as soon as the leaves are large enough to use. Snip near to the base of the plant, taking care not to damage the central crown. Use a sharp knife to ensure a clean cut and always take leaves from the edge of the plant to encourage the smaller central leaves to grow on for a second, or even third crop.

Pak choi can be enjoyed in stages. The thinnings may be used in salads and the mature plants left to grow on for cutting whole and enjoying in stir-fries or as steamed greens. Chinese cabbage, too, should be taken as soon as the head has filled out. 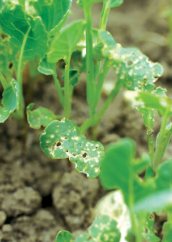 The quick-growing habit of Oriental vegetables lessens the chances of them becoming ravaged by pests and diseases, but as with any crop, problems will occasionally occur. Chief among these are slugs, which can polish off young seedlings in a single sitting. If they do become an issue then regular torch-lit forays to pick them off at night will help to control numbers. Alternatively, set beer traps in among plants – the slugs love ale and will drown as they slake their greedy thirst. Spacing plants at the correct distance will give these visitors fewer hiding places and make them easier to spot.

Flea beetles are perhaps the second biggest pest. These tiny, hopping black bugs nibble holes in leaves and while this doesn’t render them inedible, it looks unsightly and can cause them to become tough. Set defenses up early in the season by covering newly-sown patches with horticultural fleece. Make sure the sides of the material are tucked into the soil to prevent the beetles getting in at ground level.

Club root is one disease that may cause problems. The fungus causes leaves to wilt and roots to become distorted. If your soil is acidic it is more likely to become a nuisance, so apply lime a few weeks after digging to raise the pH to 7 or higher. Practising rigorous crop rotation and making sure your soil is free-draining will also help.

Battle Of The Bolt

Bolting is when a plant prematurely stretches up to produce its flowers and seed. If this happens before the crop is ready to harvest it renders leaves bitter-tasting. Knowing a little bit about why bolting occurs and how to prevent it will stop this happening and give you a satisfying result every time.

Most Oriental vegetables tend put on their biggest spurt of leaf growth as the days shorten, and only flower as daylight hours increase in spring. This means that if you sow after the longest day of the year you are less likely to have your vegetables bolt. Of course, sowing in late summer or autumn doesn’t automatically remove every chance of bolting – you will need to maintain an optimal environment of moist soil to keep plants growing strongly so they don’t feel the need to run to seed. If plants do begin to get a little leggy and you fear they are about to bolt, then simply pinching out the stretching stems can knock them back into leaf production before all is lost.

Some vegetables and varieties are less prone, so watch out for those listed as resistant to bolting. These types will be more suitable for spring sowings. 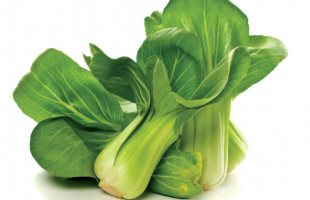