Looking for a hardy crop that will withstand the winter? Leeks will tough out the coldest times of year while offering a tender, melt-in-the-mouth flavour, explains Anthony Bennett

Plots stay productive throughout winter thanks to a hardy group of coldweather veg that cope with the frost and wet to yield crops when little else is available. These tough stalwarts survive anything that’s thrown at them and are tasty enough to transform your seasonal dishes. Pivotal to this seasonal line-up is the flavoursome leek – a tough yet tender plant that happily sits tight from autumn through to spring. With every mild frost the stems, or shanks, of this member of the onion family will thicken.

Some gardeners are put off growing leeks by the lengthy period of time they take to reach maturity. While this is certainly true, they are usually started off in a separate, compact seedbed and are only planted out into their final positions in summer, when many early vegetables will have been removed. This makes them an excellent second crop which, when coupled with the fact you can expect to lift the pure-white shanks from October through to March, makes them a very attractive winter and spring proposition.

Sow leeks early in the year under glass for a summer crop of dainty-sized veg that will compete with spring onions for a place in your salad bowl, or start them off in early to mid-spring for a maincrop in winter. Given time and space, every plot can raise a beautiful row or two of these usually pest-free, easy-to-please vegetables. Use them in stews, soups or steamed.

Compared to other members of the onion family, leeks are much less fussy when it comes to soil requirements. They need a well-drained and nutrient-rich growing medium, but so long as this need is met they should do well. Their ideal soil is a sandy loam but clay can easily be improved by working in organic matter and horticultural sand to develop a free-draining structure.

Pick a sunny and sheltered position for your leek bed and get it ready the autumn or winter before planting by digging it over and incorporating ample proportions of well-rotted manure or garden compost. A leafy crop such as lettuce or cabbage can be grown in the same area the following spring, to be removed when the leeks are ready for transplanting into their bed.

Seedbeds need to be dug over at the same time as you prepare the main site and will benefit from a sprinkling of fertiliser, such as chicken manure pellets, about a week before sowing. Leeks are naturally heavy feeders and a well-prepared seedbed and final planting area will give you the longest, best-flavoured shanks. At the same time, rake the ground level, pulling any large lumps of soil or stones to the side. Do this on a dry day, when the top layer of soil can be worked with ease.

Leeks may be sown on two separate occasions to provide crops with different uses: in late January to early February for a summer harvest of fresh baby leeks; in spring for sturdy, winter shanks with plenty of earthy flavour. For the earliest crops, sow seeds into trays or pots of multipurpose compost. Space them about 1cm apart and sift over more compost to cover them to a depth of 1cm. Pat the surface of the compost down using the bottom of another pot or a wooden block. Water the tray and place it into an unheated propagator or, alternatively, put a sheet of glass over the top and cover it with newspaper. Keep the seed tray in a greenhouse or cold frame, removing it from the propagator or taking off the glass sheet as soon as germination has occurred. Thin the seedlings to leave about 2cm between plants once they have all emerged.

Sowing outdoors is completed in early to mid-spring as soon as the soil is workable and has warmed up a little – usually late March in the south and April elsewhere. Draw 1cm-deep drills using a garden cane or hoe and then sow thinly. Aim to space the seeds about 1-2cm apart, as most will germinate successfully. Seed should remain viable for up to four years if stored correctly. Space drills about 15cm apart then cover them over using sieved soil. Water thoroughly along the rows with a watering can fitted with a fine rose and keep your seedbed moist at all times. Germination should take around two to three weeks.

Leeks will be ready for transplanting into their final position once they have reached about 22cm tall and are approximately the width of a pencil. For greenhouse or cold-frame-raised leeks, this will be around April and for seedlings started off in a seedbed it is likely to be during late June or July. Be sure to first harden off under-cover-grown leeks by placing the trays of plants outside for increasingly longer spells or by propping up the lights of the cold frame.

Rows of leeks are spaced 40cm apart and the veg placed at 15-23cm within the rows, depending on the ultimate size of leek you desire. Go for the larger spacing if you want decentsized, chunky specimens. Each leek transplant will need preparing by reducing the leaf growth by about a quarter. This limits the amount of water loss from the young plants, helping them to recover from the shock of being uprooted. To plant, make a 15cm hole into the prepared ground using a dibber and drop one young leek into each, ensuring the roots reach the bottom. Next fill each hole to the brim with water and then walk away. As the water drains down it will draw enough fine soil with it to cover the roots and settle it in. The remainder of the hole will naturally fill in as you hoe for weeds or with each rainstorm. This technique increases the amount of white shank that you will achieve.

Shortly after transplanting, your crop may benefit from a liquid feed to give it a boost, although this isn’t necessary on well-prepared, fertile soil. From this point onwards your young plants will need to be watered regularly during dry spells. It is also essential to keep the ground between rows weed-free – being tall, strap-like plants, leeks don’t provide thick ground cover and there will be plenty of opportunity for weeds to gain territory. Do this by hand or use a hoe, but be very careful not to slice the young plants. From mid-August to October the size of the white shank can be increased by earthing up, in much the same way as potatoes. Use a hoe to draw up dry soil against the shank, taking care not to get dirt in-between the leaves as this will lead to a gritty texture when you come to enjoy your leeks. Carry out this technique, also known as blanching, in stages by adding an extra 4- 5cm of soil each time. To reduce the risk of earth tainting the shank you can slip over a tube of material, drawing the soil up around this. The tubing, or collar, could take the form of old piping. Alternatively tie a few layers of brown paper loosely against the shank using string. These collars can be added in stages as the process continues.

During spells of wet weather or in damp conditions, leek rust may attack. As its name suggests, this disease appears as bright-orange, raised fungal pustules, which turn leaves yellow and causes them to die back, while the inner part of the vegetable is generally left unspoiled. When you come to harvesting your crop, be sure to remove and destroy all affected layers, and grow leeks and other alliums on a different site the following year.

Early sown leeks will be ready for lifting as soon as July, when they can be enjoyed as spring-onion-sized baby veg, leaving others to grow on for enjoying as needed. Leeks sown in spring will be ready from October. Harvest these as they reach the desired size, leaving smaller plants in the ground to increase in girth. The veg will continue to grow in the winter, during any mild spell and will happily sit right through until next spring.

Take great care when you are lifting your leeks and never tug them out with your hands in case they snap. Instead, use a fork to gently rock them back and forth so that the entire plant is extracted in one piece. Leeks are exceptionally hardy and can be left in place all winter, which means they can sometimes get in the way of preparations for new crops. If you need the space, lift any remaining plants and heel them into shallow trenches, placing them on their sides and covering the shanks over with soil, but keeping the leaves clear of the ground. They should store for another month.

Tough, hardy leeks are rarely affected by pests, but the leek moth is one troublesome insect you may encounter. It has now made considerable inroads in southern and eastern England.

Symptoms include the development of brown or white patches on the leaves, coupled with holes bored into the stems. Badly damaged plants are then vulnerable to infection from rots, which can inflict more damage than the moth itself. The caterpillars of the moth are a pale green-yellow with a brown head. They are about 1cm in size and will emerge to create silk-like cocoons on the foliage where they pupate.

Unfortunately, they cannot be controlled, so prevention is essential. Provide optimal conditions for plants by keeping them well watered so they quickly grow to a large enough size to defend themselves against the moths. Crop rotation is paramount, as adult moths can overwinter in mild districts.

The leek may be the national symbol of Wales, but it is around the Newcastle area of north-east England that the tradition of growing and exhibiting them has evolved. The veg can be grown for exhibition in one of three ways: as pot leeks, blanch leeks or long leeks. The former aims for the greatest possible shank girth, with total length limited to 15cm. The objective when growing long leeks is for the greatest possible length – at least 23cm and usually substantially bigger. Blanch leeks are somewhere in between, with a shank of about 15-35cm high.

Growing exhibition leeks is serious business and as such exceptional methods of culture are employed to get the desired results. Plants are normally started off from ‘pods’ (also known as ‘pips’): small swellings or bulbs that form after a leek has flowered.

Some of these may have a single leaf emerging from them, earning them the name ‘grass’. These pods are separated from the parent plant and then individually potted up with compost in mid-winter and placed in a heated greenhouse. As the young plants grow they are potted on and kept well fed to encourage quick, even growth. Cultivation techniques vary from here according to what you are trying to achieve, but in most cases ‘drawing’ of the leeks is performed to increase the length and brilliance of the shank. 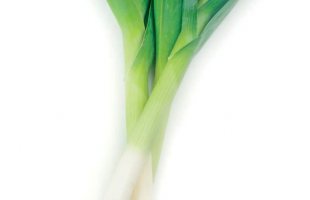