You won't need much time on your hands to get these low-maintenance veg underway. The hardy greens will grow through the summer to give you a coldweather harvest late this year

Only in recent years have the numerous benefits of kale been rediscovered by British gardeners – and it’s about time too. Kale is one of the most accommodating crops you can grow, providing fresh greens in the depths of winter. Just when the last of your summer crop has been cleared away, kale comes into its own, providing a steady supply of tender leaves right through winter to the following spring.

Perhaps it was kale’s reputation as a tough and bitter plant that saw it lose favour, but harvested correctly when the leaves are still young, it makes a delicious addition to winter recipes and is bursting with healthy iron. It is extremely hardy and will thrive in almost any condition, surviving temperatures as low as -15°C and gracefully putting up with exposed and part-shaded positions that few other brassicas would. And frost only helps to improve its flavour, by turning the leaves’ starches to sugars. As for the most part, kale has a high resistance to diseases, they will need less care than many other brassicas. Just remove any yellowing leaves that appear at the plants’ base.

Kale can be grown in a number of ways, either as a cut-andcome- again salad crop, harvested at the baby leaf stage, or as a mature source of tender winter greens. There are quite a few types available to give you the longest possible season of enjoyment: curlyleaved kales such as ‘Pentland Brig’ that have crinkled foliage similar to parsley; plain-leaved types like ‘Cottager’s’ with a more open shape; and rape kales for sowing in mid-summer for a spring crop. In all, you can expect a range of tasty leaf options from plants that suffer few of the problems that other brassicas do.

Few crops will tolerate the range of soil conditions that kale does. It will grow in almost any soil so long as it is relatively free draining and has a good supply of nutrients.

Nevertheless, preparing a growing position will pay dividends in the quantity of leaves picked – you can expect to harvest up to 1kg from a well cared-for plant. Pick a sunny spot if possible, although a part-shaded one will still leave you with a satisfactory harvest.

Kale is usually started off in modules, pots or a seedbed before transplanting into its final home. The growing position should have been dug over the previous winter and a generous amount of well-rotted manure or homemade compost incorporated into the soil. If your soil is on the acidic side you will also need to add lime before planting to lower the pH until it is mildly alkaline (around 6.5). Alternatively, you can follow kale on from an early summer crop such as peas or early potatoes, thereby maximising the use of available space. All that will be left to do once the previous crop has been removed is apply a dressing of organic fertiliser, such as pelleted chicken manure, a week or two before planting time as the soil will already have been well manured for the previous crops.

The kale growing season starts in April to early May. The seeds can be started off in outdoor seedbeds by sowing into drills 1cm deep. Space the seeds thinly along the rows and leave 15cm between each row. Cover the seeds over and keep the bed moist to aid germination, which should take about 10 days. Seedlings will appear in a wide variety of temperatures, so early success shouldn’t be difficult. Once they are up, remove excess seedlings to leave one young plant every 7cm.

When space is limited, sow seeds into modular trays or 7cm pots. Sow a few seeds per module, thinning to leave the strongest seedling intact. Use multipurpose compost for sowing and keep seedlings in a bright and relatively cool position to stop them becoming drawn and leggy.

Rape kales hate being disturbed and must be sown directly into their final growing positions.

Keep seedlings moist and allow them to grow on steadily. Do not allow them to dry out, which will unnecessarily stress the young plants and lead to poorer specimens. After about six weeks, in June or July, the plants will be ready to transplant into their growing positions. At this stage they will have around four to six leaves and be about 15cm tall, give or take 5cm.

Tamp down the soil of their new home with the back of a rake and lightly incorporate organic fertiliser if you didn’t do so a few weeks earlier. Do not dig the soil – kale likes a firm root zone and fluffing up the soil at this stage will only allow the plants to rock back and forth in the wind. Carefully lift the young plants from their previous home, taking care to preserve as much of the original root system as possible, and plant them at a spacings of 45cm between plants in both directions. Module-sown seedlings will be easier to plant without disturbing the roots – just leave the growing media packed around them when transferring the young plant. Set the plants a little deeper than they were previously so that the bottom leaves are just sitting on top of the soil surface and then firm them in thoroughly with your boot. Puddle the plants in by soaking them with water, which will further settle the soil around the roots.

Kale needs little more than a casual eye cast over it; it’s a truly easy-care crop. In hot, dry weather you will need to ensure that the soil is kept consistently moist. Regular removal of weeds will also help the plants to grow unhindered. Careful hoeing will sever weeds in two before they have a chance to set seed and spread, or consider applying a mulch of organic matter if a really hot summer is under way – this will lock in the moisture and give weeds a tough time by depriving them of light.

Taller varieties may begin to rock loose as the wind picks up in autumn. If this happens, you’ll need to stake individual plants by loosely tying them in to lengths of bamboo cane and then firming them back in. Banking up the soil at the base of the stems will also provide shelter from the wind while protecting the roots from severe frost.

The majority of kale’s Brownie points are won in its lack of susceptibility to pest and disease attacks. Unlike cabbages, cauliflowers and other brassica, kale isn’t of much interest to many common pests, making it a very simple crop to grow. Keep plants tidy, however, by picking off any yellow leaves.

Harvesting kale is where many people go wrong. After nurturing plants through to cropping time, all the good work can be undone by over-picking the leaves. The best way to pick is little and often, and always when they are young and tender. Leaves will be ready for harvesting from as early as October but usually from November or early December. Cut away leaves from the crown (top), removing a few at a time from each plant. They can also be taken from the plant by a sharp, downwards tug. Do not eat any that are yellow or large and old as they will be tough and unpleasant.

Picking leaves from the crown in the winter will encourage side shoots to form from about February. These side shoots are also delicious and should be removed once they reach 10–12cm in length. By early spring, plants can be ticking along on exhausted soil, so applying a regular organic liquid feed will give them an extra boost, causing more side shoots to grow. Once kale begins to produce flower shoots lift the plants and take them to the compost heap. Chop up the tough stems with secateurs to enable them to decompose quicker. 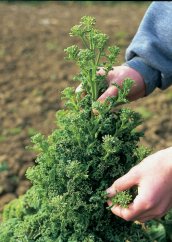 There aren’t many plants that will reward you with a steady crop of tender leaves from late winter to May. Rape kale is very similar to other varieties of kale but is sown within a few weeks after mid-summer (June 21) to give the latest crop of all the kales. Sow before this date and the plants will put on too much lush growth before winter, severely compromising their hardiness in cold snaps. There are a few rape kale varieties to choose from – look out for ‘Ragged Jack’ and the appropriately named ‘Hungry Gap’.

Rape kales won’t tolerate being transplanted, so you will need to sow them in-situ where they will grow right through to maturity. Sow seed 1cm deep in rows 45cm apart and thin in stages to leave one plant every 30–45cm. Alternatively, sow three seeds every 30– 45cm along the rows and thin to leave the strongest seedling at each ‘station’. The plants can then be treated in exactly the same way as other kales with the first pickings from February.

By its very nature kale is a cut-and-come-again crop. In other words, cut away a leaf and a new one develops to replace it, providing several decent harvests. This trait can be taken advantage of at all stages of the kale’s lifecycle and growing baby leaves from seedlings for use in salads is just one way of enjoying this self-rejuvenating crop.

To grow cut-and-come-again salad leaves simply sow the seeds thinly 1cm deep in rows spaced just 10–15cm apart from early spring through to late August. The leaves can be cut when they reach 5–7cm in height, which can be as little as a month from sowing. Cut the leaves a few centimetres above the soil level to keep the central growing point intact and another cut of leaves will follow in a few weeks. This process can be repeated a couple of times. An excellent variety for sowing this way is ‘Red Russian’, which can also be left to grow on to a height of 15cm when the slightly larger leaves make a succulent stir-fry vegetable. 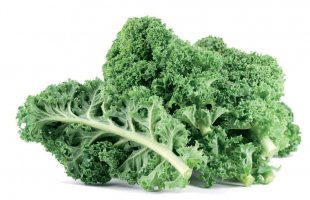