Don't be put off by the stringy, shop bought veg you may have tasted in the past. Growing these colourful climbing or dwarf plants at home will leave you with a hefty crop of tender, flavoursome beans

A firm favourite in continental Europe, French beans are a surprisingly versatile crop that’s also easy to grow. In the UK they’re often overshadowed by their popular cousin, the runner bean, but there’s really no reason for this. Available in both dwarf and climbing varieties, they can be enjoyed as tender, melt-in-themouth green beans – the Kenyan-type sold in the supermarket – or left to mature for drying as chunky ‘haricots’ for use in stews and soups. Add to this the range of pod and bean colours – bright green, yellow, purple and speckled – and you’ll be spoilt for choice.

Beans aren’t fussy but will require a sunny, sheltered spot if they are to perform well. They also do best in warmer, sunnier summers, but even in cooler spells they will happily sit, ready to take off as soon as conditions improve. One thing they won’t tolerate is frost, but this makes them all the more suitable for planting once earlier crops, such as early potatoes, salads and broad beans, vacate the ground.

Climbing French beans will make an attractive display in their own right – scrambling up bamboo canes or hazel poles, and a purple-podded and flowering variety such as ‘Blauhilde’ will look stunning, even in the flower border. Dwarf varieties offer great flexibility – dot them about the veg patch as needed for a speedy crop of pods. French beans will even make a reliable container crop.

French beans need as sheltered and sunny a position as possible otherwise strong winds can damage young plants and delay their growth significantly. They prefer lighter soils to many crops, so if you garden on heavy clay you may be better off growing the beans in containers. They also prefer a neutral soil pH; if yours is strongly acidic it will need an application of lime the autumn before planting to raise the pH. Dig over ground the autumn before sowing and take the opportunity to work in plenty of organic matter. Aim to add a bucket load of well-rotted manure or compost for every square metre of your growing area.

About two weeks before sowing or planting your young beans out, make some final preparations. Rake soil level and move any large clods of soil or stones to the side of the bed. At the same time rake in a scattering of an organic fertiliser, such as chicken manure pellets. Set canes or poles in place shortly before sowing and tie them securely together using string. Arrange four to eight canes in a circle that is about 60cm in diameter and add a few horizontal lines of string inbetween to give further support.

The young plants cannot cope with frost, so there is little point sowing too early. Wait until the soil has warmed up and the danger of frost has passed, which will be from about mid-May. Sow two seeds per cane for climbing varieties, or if growing dwarf French beans in rows, sow one seed every 10cm, spacing each row 45cm from the next. Sow the seeds 5cm deep in each case. Beans have a very high germination rate, so denser spacing is unnecessary, but as a precaution sow a few extra at the ends of rows to fill the gaps if any fail to emerge.

If you are itching to get a crop – and let’s face it, who wouldn’t be – then an earlier picking can be had by sowing under cloches from early April. Place these over the soil a few weeks before sowing to warm the earth, and leave them in place until frosts are finished and the weather has improved. Alternatively, sow individual seeds into coir pots or small 7cm plastic pots of multipurpose compost. The coir types have the advantage in that the complete pot can be planted, doing away with root disturbance. Keep the pots under cover of a greenhouse and plant them out from mid May, after leaving them outside for gradually longer time periods to allow them to adjust to the colder climate.

It won’t be long before your seedlings pop up – seven days to two weeks in cooler weather. At this young stage they will be vulnerable to slug attack, so keep a close eye out for the slimy molluscs. Prevention tactics include planting sacrificial lettuces close by – slugs will attack these rather than your beans, dusk patrols to pick them off by hand, or barriers of sharp grit or egg shells. With all seedlings up, thin caneplanted beans to one seed per station, taking care not to disturb the remaining seedling. Gap up any beans that failed to make an appearance with spares at the end of the rows.

Although dwarf French beans do not climb, it’s still worth offering them some support to keep them off the ground and out of the path of slugs. Use twiggy pea sticks for this purpose, pushing them in next to the young plants to encourage them into the supports. Climbing beans can also be grown up pea netting, as well as bamboo canes or poles.

In milder parts of the country it is worth taking a risk and sowing directly outside from April or early May. If seedlings are killed by frost they can always be re-sown. Making another sowing of French beans in June or early July will extend the season right through to October and this is advisable if you want to grow beans for drying to use during the winter.

To grow French beans in containers simply fill a pot that’s at least 45cm wide with an equal mixture of multipurpose compost and soil-based John Innes compost. Climbing beans are good in pots and can be sown in the wigwam arrangement. Pinch out the tips of your plants once they reach the tops of their canes as this will prevent them from growing any taller.

Once they’re up and away French beans won’t need much care other than watering during dry spells and weeding between rows or around plants. Use a hoe to slice off weeds at ground level or pull up larger perennial weeds such as dandelions or couch grass with a border fork. Watering is particularly important once the plants begin to flower and as the beans are developing. Applying a mulch of compost or grass clippings laid over sheets of newspaper will keep the soil beneath moist, while giving weeds a hard time.

Few serious pests will disturb your beans but blackfly can sometimes make an unwelcome visit. Don’t worry if this happens, as the worst of the infestation can simply be blasted off by a hosepipe. Or try companion planting and dot colourful orange-flowered French or pot marigolds in-between your French beans. These will draw beneficial insects, such as ladybirds and hoverflies to your plot – and both have a voracious appetite for blackfly and aphids.

French beans that were started off early in the greenhouse or under cloches will be ready to pick by mid June, with the bulk of beans starting into cropping by July. Keep picking the beans while they are still immature. When you leave them to grow on into mature beans that fill out their pods the plants will stop producing new crops. Your green beans will be ready to pick once they reach about 10cm long, but pod length can vary, so look for other signs too – the pods should snap easily, the outer casing should be smooth and not coarse, and the beans should not show beneath the case. Of course, fresh beans taste far better than beans that have been lying about on the supermarket shelf for days on end.

Pick over beans every few days and you can expect to enjoy them for five to seven weeks. Be careful not to damage the plants while harvesting – hold stems steady and don’t tug too hard or, to be on the safe side, snip pods away using secateurs. Even when pod formation slows or appears to cease, a liquid feed and a brief rest can sometimes spur the beans back into life. It’s also worth leaving a few healthy-looking pods on the plant at the end of picking time to mature into dried beans or for next year’s seed. 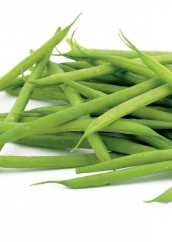 Dried beans are a welcome winter staple, offering a nutritious, meaty addition to stews, casseroles and soups. Home-grown French beans for drying (known as haricot beans) taste far superior to supermarket-bought types and will need less cooking. There are many types of French and runner beans suitable for this treatment, including beans such as borlotti and cannellini.

Plants producing beans for drying are cared for in exactly the same way as those used for fresh beans but they need a long growing season, so start as early as possible. Sow under cover before planting out, or under cloches from mid April. You can harvest a few immature, green pods but don’t pick too many as this will hold back the plants’ progress to maturity.

Allow the pods to fully develop – they should turn a pale colour by the autumn. Dig up the plants on a dry day and hang them upside down in a cool, dry place where plenty of air will circulate. Once the pods are crisp and beginning to split open it is time to shell them.

Spread the dried beans out onto paper and allow them to dry further for another week or two. They can be stored in airtight jars as soon as you are certain they are fully dry. Don’t forget to soak them overnight before cooking and boil them vigorously for 10 minutes before simmering until they become soft.

Costs have a habit of mounting up, so it’s good to know that savings can easily be made in the kitchen garden. Saving your own seed from year to year is just one way of doing this and French beans are the ideal candidates as the beans are self-fertile and will therefore come true to type.

Just be careful if you are growing lots of different types of French bean close to each other as cross pollination may occur, leading to variants on the variety you intend to grow. Having said that, some interesting new types could be experienced that are unique to your plot!

To save some seeds allow a few pods to grow on to maturity. Once the pods have turned a pale straw colour they are ready to pick. Lift the plants, dry them and shell the pods in the same manner as for drying beans for eating (see box: ‘Shelling’). Place the dried seed beans in envelopes, writing the variety and date of harvest on the outside, and keep the seeds until next spring in a dark, cool, dry place. 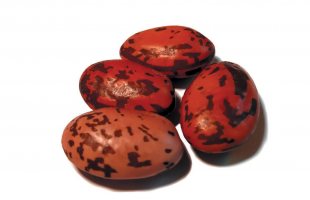