Are you searching for an easy-care soft fruit that quickly gears up into productivity? Red- and whitecurrants will fill the position perfectly!

Recent years have seen a surge in the popularity of producing home-grown vegetables. Rightly so – it’s hard to beat the flavour and nutritional value of freshly-pulled carrots, or tomatoes straight from the truss. But as more of us master new gardening skills, the big push now is to grow fruit. Contrary to common misconceptions, these crops needn’t take up lots of room, and a good harvest can be had in as little as a year. There’s as dizzying an array of fruits suitable for British gardens as there are vegetables.

For those new to home-growing there’s no better place to start than soft fruit. Red- and whitecurrants in particular are a beginner’s dream – easy to care for, selffertile and with straight-forward pruning requirements that anyone can master.

These beautiful currants can yield as much as 5kg of fruit per bush and may be grown as fence-hugging, single-stemmed upright cordons or fans to save on space. Their spring flowers are followed by the tempting hanging ‘strigs’ of red or pearllike currants, making them incredibly decorative to boot. A well-tended bush can be expected to yield its versatile fruits for as long as 20 years after planting.

Redcurrants have a fairly tart taste but are perfect for incorporating into pies and jellies or as an attractive garnish for lamb and game dishes. Whitecurrants are a colour mutation of redcurrants. The translucent fruits tend to be smaller and more delicate in flavour. Both types have high levels of pectin, which makes them excellent for turning into jams and jellies. Alternatively, enjoy them fresh with other fruits such as blackcurrants and chopped strawberries with cream.

Red- and whitecurrants are useful fruits as they don’t require full sun. In the warmest parts of the country the strength of direct sunlight can even burn leaves on the hottest summer days, so a little afternoon shade is positively helpful. In northern or upland gardens plump for a position in full sun, and in southern regions a spot that receives afternoon shade, such as an east-facing wall.

Currants are happy in most soils, so long as the ground is free-draining and doesn’t get waterlogged. All plots will need improving with ample compost, well-rotted manure or leaf mould. This will help to open up clay soil while adding to its ability to drain. In sandier areas, the extra organic matter will help to increase summer soil moisture levels and add essential nutrients that might otherwise be quickly washed out by rain. Dig in this vital boost the autumn or winter before planting, or if you haven’t been able to do so, incorporate it at planting time directly into the prepared hole.

In all instances remove weeds and their roots before positioning your bushes. Perennial weeds in particular can be tricky to get rid of once your new residents are in situ so a little attention paid now will save valuable time later on.

Look for two-year-old plants, as these will be much closer to bearing fruit. You can either buy in bare-root specimens, available throughout the dormant period from October to March, or containerised crops, which will be ready year-round. In early summer you’ll need to go for the latter, which couldn’t be simpler to plant.

Either make a hole in prepared ground that’s large enough to accommodate the rootball, or start from scratch by digging down deeper and wider and incorporating plenty of well-rotted manure or compost into the bottom of the hole for the roots to grow into. Remove the currant from its container and, once planted, backfill the soil, pressing down firmly around the sides as you re-fill.

Bare-root currants must be handled with care so as not to damage the delicate roots. Spread these out at the bottom of the hole, and feed the earth back in so that the final ground level matches the original soil mark on the currant. Again, press down firmly as you fill in the hole to remove any air pockets. In both instances, do not plant when the soil is frozen or excessively wet. Leave 1.5m between bushes and, if you plan on growing lots of fruit, 1.8m between further rows.

Single-stemmed cordons will need to be tied to a 1.8m bamboo cane which is then attached to horizontal wire supports. Set the wires 60cm and 120cm above ground level to keep the cane upright. About 45cm between cordons should be ample room, allowing several varieties to be grown at once.

As soon as you have planted your currant bushes or cordons add a layer of organic material around the base of the plants. Mulching is an important consideration for currants as it will help to preserve soil moisture for these shallow-rooting fruits.

It will also feed the soil as the material is drawn into the ground by earthworms and through natural decomposition. Applied 5-7cm thick, a mulch will prevent the majority of weeds showing through, ultimately reducing the amount of time you need to spend pulling up unwanted plants. Of course, remove any weeds that do appear so that the currants can grow without unnecessary competition. Suitable mulches include compost of all types, grass clippings, leaf mould and many other decomposed or partially rotten materials.

Being cool climate crops, red- and whitecurrants prefer damp soil. If the weather is dry you will need to water plants to keep them growing strongly. Dry soil won’t harm established bushes but will result in smaller leaves and, therefore, a decreased harvest of currants. Do not wet the foliage when you water, but instead aim the hose or watering can at the base of your bushes. Leaky pipes or similar ground irrigation systems will work more effectively, especially if hidden beneath a mulch where the moisture will remain trapped in.

Birds like currants as much as we do and may attack at fruiting time and in winter, when bullfinches can decimate young buds. Grow your crop in a fruit cage (turn to page 31 for instructions) drape bird-proof netting over plants at these vulnerable times, securing it at the base so that ground-feeding birds can’t gain entry. The spring flowers may also need protection, but this time from frost. Cover plants with a layer or two of horticultural fleece if a cold snap threatens, to protect the delicate blooms.

Your long-awaited currants will be ready in July or August, depending on the variety you’ve chosen. Unlike other fruits, the entire truss, or ‘strig’, of red- or whitecurrants is removed at once. This is because the thin skins are very delicate – pluck away one at a time and they will not keep for long.

Wait until the entire strig has taken on its desired colour before cutting it away from the plant using secateurs or scissors. Handle the strigs with extreme care to avoid bruising and, if needed, remove the currants individually, just before use.

When the fruits are ready, redcurrants will have a full, clear red colour, while whitecurrants will take on their translucent pearl shade. Individual currants can swell up to 8-12mm in diameter and should be consumed fresh to appreciate their full flavour.

Should yields begin to decline, start feeding bushes and cordons each spring with a top-dressing of organic, general-purpose fertilizer such as blood, fish and bone, before the annual top-up of organic mulch. The extra nutritional punch, coupled with regular removal of old wood in winter, will keep plants productive.

Pruning isn’t difficult and consists of two phases: establishing the bushes or cordons, then maintaining a healthy structure. Start pruning bush currants the first spring following planting by selecting five of the strongest stems and cutting these back to about 20cm. Cut out all other stems to where they emerge. That summer, in June or July, reduce all new growth to five leaves, retaining those stems that complete the bush’s framework.

In winter, remove all new side shoots to just one or two buds and reduce the main branches by a quarter, making all cuts to an outward-facing bud. The object now is to maintain an open-centred, goblet shaped bush, which will give plants plenty of air and make picking the fruits far easier.

For established bushes, summer prune new growth as above and cut back again each winter. Currants fruit on wood up to three years old, so remove a few of the oldest branches during January or February to encourage productive new wood to grow. At the same time remove dead or diseased growth, and any branches crowding the centre of the bush.

Cordons are pruned in much the same way, with new growth reduced to five leaves in summer and to one or two buds in winter. Tie in the main stem to its cane as it grows and cut it back by a third each winter. Once this leading stem reaches the top of the support it can be pruned in a similar way to other shoots. Just cut new growth to five leaves in summer and then prune these in winter to leave one or two buds of that season’s growth. 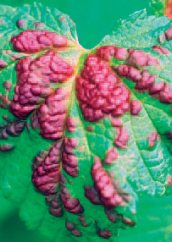 The leaves of red- and whitecurrants can sometimes take on a blistered appearance thanks to a sap-feeding insect. The currant blister aphid attacks the underside of leaves in early summer. As it feeds the leaves buckle and blister. Foliage can become discoloured and pale red, while the tips of stems distort. A cursory inspection will reveal the pale yellow aphids causing the damage.

Despite the rather alarming appearance of plants, currant blister aphid causes no long-term damage to bushes and does not affect the quantity of fruit taken. By midsummer the aphids will have migrated from the bushes, allowing the plants time to recover. Aphids can return in the autumn to lay their eggs, which will then overwinter until spring. To thwart this attempt at re-colonisation, spray plants in midwinter with a winter tree wash.

It’s not difficult to propagate new currants once you’ve got an established plant thriving. More mature wood removed at pruning time can be used to take hardwood cuttings. In many cases prunings left lying around can take root of their own accord! Only use healthy wood to take cuttings and ensure these are around pencil thickness; cut them to 25-30cm in length. Push them into well-drained soil so that they are three-quarters buried and wait. Roots will develop along the length of the buried wood and by spring new top growth should appear. In early autumn the rooted cuttings can be moved to their final positions.

Layering is an even easier method of propagation. To do this, pull down a low-growing and flexible stem from an established bush, and secure it to the ground using a pin fashioned from an old coat hanger or by weighing it down with a rock. Once the stem has rooted and young growth is underway, the cutting can be severed from the parent plant and then relocated. 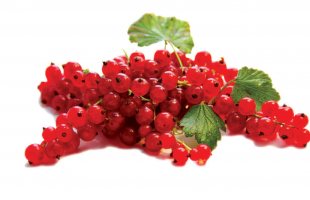