Calabrese is one of the most rewarding members of the brassica tribe you can grow. Chock full of cancer-fighting compounds and ready for devouring within a few short months, it’s a crop that works hard to earn its place on the plot.

Many grow-your-own enthusiasts will have eaten calabrese without necessarily realising it. It’s sold as broccoli in the supermarkets – the firm green heads that are delicious lightly steamed, stir-fried or made into a rich soup with blue cheese. This misnaming has given rise to some confusion between calabrese and ‘true’ broccoli – a sprouting vegetable that’s enjoyed very early on in the year when pickings on the plot are otherwise thin. True broccoli overwinters while calabrese is sown, grown and harvested in the same year, completing its useful lifecycle within four to five months, and often quicker than this.

Calabrese needs a rich, firm soil that isn’t acidic. You will need to ensure there is minimal root disturbance, which means sowing directly where it is to grow, or starting seedlings off in modules and pots, rather than transplanting. During the growing season, plants demand careful watering and a weed-free patch. Protection against some of this tasty crop’s foes, notably marauding pigeons and the cabbage white butterfly, is also likely to be necessary. Don’t be put off if all this sounds like too much fuss – despite appearances calabrese is still a relatively easy crop to grow and given these few precautions you’ll be picking good, solid heads of tightly-closed flower buds throughout late summer and autumn.

Pick a sunny position on the vegetable plot for your calabrese. It is important to practice strict crop rotation to avoid potential pest and disease problems, as well as making the best use of your soil. Do not plant calabrese where other members of the brassica family, such as cabbage and Brussels sprouts, have grown in the past two years. If possible, follow the plants on from legumes such as peas.

Like all brassicas, calabrese prefers a firm, loamy soil that is full of nutrients. Prepare the ground the autumn or winter before sowing by digging it over then adding organic matter – about a barrow load of garden compost, leaf mould or manure per square metre should do the trick. Allow the worms to draw this into the ground over winter, before forking over the area the following spring. If your soil is in any way acidic, you will need to apply some garden lime at this point. Add at least 100g per square metre, or considerably more if your soil has a particularly low pH. It is hard to add too much lime, so err on the side of excess if in doubt. The level should be at least pH 7.5 – that’s just above neutral. Around one week before sowing or planting out, add a final boost of nutrients to the soil by sprinkling over some blood, fish and bonemeal – a general-purpose organic fertilizer that will give your young plants a strong start.

Calabrese may be sown directly where it is to grow, or started off under cover in modules or pots. The plants hate root disturbance and sowing in this way reduces this risk. Sow directly in rows placed 45-60cm apart – the larger spacing will give bigger heads at harvest time.

Draw drills into finely raked soil approximately 1cm deep and sow the seed very thinly. Alternately, station sow by dropping a few seeds every 25cm, which will allow an intercrop of quick-growing radishes, spinach or salads before the calabrese needs the extra room. Cover the seeds back over and moisten the rows using a watering can fitted with a rose.

To sow under protection into modules, drop a couple of seeds into each cell and cover over with 1cm of compost. Water from the base of the trays, so that the moisture is drawn up from below without unsettling the newly sown seeds. Sowings under glass or plastic can be made as early as March, while those outside should begin in April or a few weeks earlier given the added warmth and protection of a cloche. Sowing a small quantity every few weeks up to mid-June can be helpful in extending the harvesting season.

Seedlings should emerge within about 10 days at which point direct-sown crops may be thinned to an initial spacing of one plant every 10-25cm. Thin them further once they are 5-7cm high to leave one every 50cm. Try to leave the biggest, healthiest seedlings in place each time to give your crop the best possible start.

Module-sown calabrese can be potted on into their own individual 7-10cm plastic pots when they are big enough. Take extreme care not to disturb the roots – slide the seedlings out of their modules very gently and have pre-prepared pots ready to receive them. Fill containers with compost, making a hole that is the same size as the module’s rootball. When the young plants are about 10cm high and have a few adult leaves they can be transferred outside. This will be in June or early July. Set the brassicas in rows 45-60cm apart, leaving 50cm between plants within the row.

Once calabrese is established it is genuinely easy to look after. However, it won’t take kindly to dry or nutrient-poor soils, which will only result in smaller heads.

Avoid this by weeding around plants carefully using a hoe and watering whenever the ground dries out. This is particularly important as the heads start to form. If your soil isn’t particularly rich you can give your crop an added bonus by forking in another light application of organic fertilizer when the plants are about 20cm tall. To lock in moisture, consider laying a mulch of garden compost around plants, making sure it doesn’t touch the main stems.

Pigeons are rather partial to the young plants, so you may have to drape netting over upturned pots supported on canes to protect them. The cabbage white butterfly might lay its eggs on the leaves. Pick the bugs off as soon as you notice them (crushing them under foot) or make sure any netting you install has a close enough gauge to exclude butterflies.

Calabrese will be ready from July through to the first frosts of late October and early November. Some particularly early varieties can be picked even sooner than this, giving a potential cropping period of around four months.

Cut the heads when they are well developed but while the flower buds are still tightly closed. 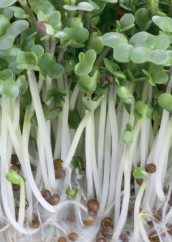 Gardeners hungry for a quick result from their calabrese should consider growing microgreens. Loved by top chefs the world over, these tender leaves add sparkle and flavour to sandwiches and salads, or as a garnish to soups and hot dishes. Microgreens, also called micro-leaves, are simply seedlings harvested at their first leaf stage. The time to harvest is astonishingly quick – as fast as five days and rarely longer than two weeks. The cress and mustard you probably grew as a child are microgreens.

The young seedlings of calabrese and broccoli have a gentle, peppery flavour that goes well with egg dishes or fish. Don’t waste expensive calabrese seed to grow your microgreens – instead buy purpose-sold broccoli microgreen seeds. Add a double-layer of kitchen paper into the bottom of an old food container, mist with water and then sow fairly thickly. Place the container on a light windowsill and keep moist. Harvest by snipping the greens at their base. 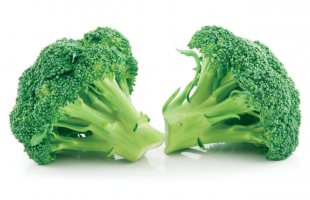