They cost a small fortune in the supermarket, yet blueberries are easy to grow when you know how and make highly ornamental additions to the plot

In recent years the sweetly flavoured blueberry has gained a reputation as a ‘super food’ thanks to widespread recognition of the fruit’s health benefits. They are certainly full of antitoxins, including large quantities of vitamin C, making this a fruit crop that’s well worth considering. Unlike other common garden fruits, however, the blueberry is such an attractive plant it merits a position in the shrub border or within a pot for pride of place on the patio, freeing up the kitchen garden or allotment for other, less showy crops.

Blueberries love an acidic soil but if you can’t provide this they are very straightforward to grow in containers or raised beds, where the soil conditions can be specially formulated for this productive plant to thrive. Many can grow up to 2m tall and almost as wide but there are also smaller varieties available, which mean anyone can try these tasty berries no matter how small their plot.

In late spring the bushes kick off their year-long display with scented flowers followed closely by the swelling berries which progress from green to their distinctive dusty blue. In autumn the leaves take on a brilliant red hue before dropping, and throughout the winter young stems radiate out an orange-red colour. Most varieties have a growing habit that tends towards upright, freeing up space beneath bushes for planting other acid-loving fruits such as cranberries and lingonberries.

After a few years new bushes will be approaching a very respectable yield, saving you considerable sums of money on the heavy cost of shop-bought berries. Few other plants combine good looks with such an abundance of fruit.

The blueberry originates from North America and the first cultivated specimens were taken from the US state of New Jersey. Here, blueberries grow in pine forests where the soil is highly acidic. Plants grown on UK plots will need similar conditions and any soil with a pH above 6.0 is unsuitable. This probably includes the majority of the country’s plots but don’t despair – simply grow the plants in good-sized containers of ericaceous compost. All blueberries will produce the biggest crop of the sweetest berries if grown in full sun though they can be grown in partial shade quite successfully.

Soil preparation is important as your plants will be in the same spot for a number of years. About two weeks before planting your blueberries dig their planting holes. Excavate the soil to a spade’s depth, digging out a square about one metre across to give the side-spreading roots plenty of scope to reach into the prepared ground. The excavated soil should be mixed with equal parts of sieved leafmould, ericaceous compost or wellrotted pine bark chippings (make sure they are sold specifically for horticultural use and are not treated in any way). Fork over the bottom of the hole then fill it back in with the prepared soil. Plants should be spaced 1.5m apart and the planting positions should be allowed to settle back down before your new specimens are planted out.

Some blueberries are self-fertile, but some are not – so look carefully at a variety’s description. If the bush isn’t self-fertile it will need a companion of a different variety to cross pollinate with. Opt for plants that are at least three years old, because they will reach peak productivity that little bit sooner and the extra expense will be paid back in the extra berries you’ll enjoy.

Most blueberries will be supplied as pot-grown plants. Planting the bushes when they are dormant between late autumn and early spring will ensure the least disruption and they will be able to get away without delay as soon as the growing season commences. For convenience however, they can be set into place at any time of the year, so long as the soil is kept moist – an essential requirement in warm, dry summer weather when plants in full leaf will have become used to a regular dousing of water.

Thoroughly water prepared ground before planting so that the bushes find a moist, welcoming environment. Remove the bush from its pot and soak the rootball in water if it is dry. Tease away the outside roots if your plant has become pot-bound to help them quickly break out into fresh soil. Dig a hole for the rootball, lower the plant in and firm it into place. The top of the rootball should sit at ground level. Puddle in the plants to help the soil settle in around them and then add a thick 10–15cm mulch of more leafmould or pine bark chippings to lock in the moisture, keeping this away from the main stems.

Recently planted blueberries will need to be watered in dry weather. Collected rain water is always preferable to tap water, which tends to be more alkaline, especially if you live in a hard water area. Apply this generously once or twice a week, making sure the moisture reaches further down into the soil than just the top few centimetres. Top up the mulch each spring and at the same time incorporate a fertiliser formulated for acid-loving plants, such as rhododendrons, into the soil. This ‘ericaceous’ (acidic) fertiliser will give a welcome boost for the start of the growing season (slow-release types that deliver the nutrients over a longer period are also available).

Blueberries are seldom troubled by insect pests and diseases. However, hungry birds can peck away at the developing fruits so you will need to add netting around the plants. Support this over them from early June as the fruits begin to swell, or consider siting blueberry bushes within established fruit cages. Lift netting clear of plants by supporting it on canes topped with cane tops or upturned plant pots. It is essential to keep the netting taught and to check it daily for trapped birds. As soon as the last of the fruit has been enjoyed in early autumn the netting can be removed.

While plants are establishing it is a good idea to allow just a handful of berries to grow to maturity; remove the rest before they have a chance to swell so that the majority of the bush’s energy goes into root and stem formation. From the second year plants can be left to form their fruit unhindered. By the time plants are five years old – perhaps two or three years after planting – you’ll be picking up to 2kg of fruit per bush. Fully mature bushes of the most productive varieties in open ground will yield up to an impressive 5kg of fruit each summer.

Berries can be picked when they have turned completely blue – a good indication that fruits are ripe and any sourness in the immature berries has disappeared. Not all the fruits ripen at the same time, so pick over plants several times from midsummer to autumn. Enjoy the berries fresh or store them in the fridge for up to a week. They can also be frozen, needing no preparation beforehand – simply place the ripe berries straight into freezer bags

Blueberries require very little attention during the first three years of their life, other than cutting away branches that trail on the ground. From then on pruning is performed each winter and is simply a question of cutting away old, dried-out stems that are no longer productive.

The fruits are formed at the tips of the stems on wood that was formed the previous year. This wood appears in late summer as sturdy, erect shoots growing from the base of the plant after the bushes have fruited. The young stems have a bright orange-red colour and will sit through the winter ready to flower and set fruit the following spring.

Each winter, cut back woody, tired branches to new growth. Thick branches that are spent and unlikely to fruit well again will need to be pruned right back to ground level, which will encourage productive new stems to form. Given this regime you should always have a good quantity of productive growth that will produce plenty of blueberries. 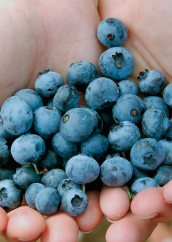 Most gardeners do not have soil suitable for growing blueberries, which demand very acidic conditions. If your soil is above pH 6.0 it is best to grow the bushes in containers. Pick an ericaceous compost, which is lime-free and formulated for acid-lovers such as azaleas and rhododendrons – and, of course, blueberries. Use frostresistant pots and if using unglazed terracotta, line the inside of the pot with polythene.

Grow your bushes in stages as they fill their pots, potting up into the next size container as it fills the existing one. Blueberries need a moist soil but will not take kindly to being waterlogged, so pick a container with plenty of drainage holes in the bottom and stand it on pot ‘feet’. Choose a relatively compact variety such as ‘Bluecrop’ or ‘Sunshine Blue’ that won’t mind these conditions. Blueberries may also be grown in raised beds, so long as they are at least 40cm deep and are filled with a mixture of ericaceous compost and pine bark chippings.

Blueberry plants looks good, produce delicious fruits that burst in the mouth – and are good for you too! Blueberries are packed with vitamin C and have among the highest levels of antioxidants of any fruit. Studies in the United States have found that blueberries dramatically improve memory retention and cognitive skills thanks to their high levels of anthocyanin which protect neurons in the brain. Anthocyanins also help to keep skin looking younger by oxygenating it – so ditch those creams and opt for something more natural and a lot tastier!

The list of health benefits goes on. Research has found that the fruits can lower cholesterol as effectively as many commercial drugs thanks to their high levels of pectin. The berries are also believed to help prevent cancers, diabetes and guard against heart disease. In a similar way to cranberries, a chemical compound within the blueberries has been found that reduces the chances of infection in the urinary tract and promotes its health. The fruits’ status as a ‘super food’ seems to be well earned! 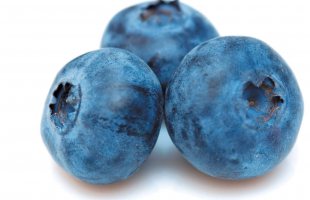