With the vitamin-packed fruit a rare sight in shops (more than 90 percent of the country's commercial crop is used in Ribena) – why not secure an affordable stash by growing your own? You can enjoy years of the delicious 'superfood' by getting your bare-rooted bushes planted this month

The familiar and widely-grown blackcurrant is a bushy plant which produces juicy, globe-shaped fruits in mid- to late summer. These are rich in vitamin C and can be eaten fresh, frozen or used in delicious jams, jellies, pies, smoothies and yoghurt. The popularity of these deciduous bushes is probably due to their self-fertile nature (so you only need one bush on the plot to supply lots of fruits), the fact that they tolerate most soils (but not dry or badly-drained ground) and are hardy in all parts of the country. They are also extremely robust and very reliable. Just about every grow-your-own gardener will know of someone who has inherited or grown a blackcurrant that regularly forms a crop of fruits despite years of neglect. I have come across large and untended plants that are several decades old and each has managed to resist the chop due to their ability to provide a worthwhile harvest each year.

However, if you grow blackcurrants ‘by the book’ and plant and prune them properly, you will get more fruits and they will be of a better quality. You will also be able to restrict the bushes to a height and spread of 120–150cm, meaning they can be grown in fairly small spaces. Furthermore, they should stay productive for at least a decade and you can expect 10–15 pounds of fruit per plant each season.

If you have never grown a blackcurrant before, or just want to expand your collection, then early winter is an ideal time of the year to plant some new specimens in the fruit garden. It’s also a good opportunity to prune established specimens to ensure a heavy crop next year.

A sheltered spot with a reasonably fertile, moistureretentive and well-drained soil is preferable for blackcurrants. If it has a slightly acidic pH (around 6–6.5 – testing kits are cheap and widely available) that’s all the better, but it’s not essential. Avoid placing them in frost pockets, as a late frost can damage the flowers and lead to a smaller harvest.

Although blackcurrants will tolerate partial shade, the fruits taste better when exposed to plenty of sunshine, and shaded bushes may become weak and leggy. A few weeks before planting, always clear the ground of weeds, especially perennial types such as dandelions or docks, and enrich the soil with plenty of well-rotted manure or compost.

Most blackcurrant bushes are sold as bare-rooted plants and the ideal time for getting them in the ground is late autumn to early winter. Any time up to mid-March is also fine (as long as the ground isn’t waterlogged or frozen) but they will have less time to settle before starting into growth. Container-grown specimens can also be purchased from garden centres or nurseries and planted throughout the year – but whenever possible, opt for the autumn, early winter or spring. Whatever the month, planting should always be avoided if the ground is very dry, frozen or waterlogged due to heavy and persistent rain or poor weather conditions. For the best results, select bushes that are certified as virus and disease-free and have at least three obvious stems.

Space the bushes 1.5m apart in the ground, and set them about 5cm deeper than they were planted in the nursery – an obvious soil mark is usually visible on each plant. This will encourage the stem bases to form roots as well, and eventually give the bushes more support.

Once the new bushes have been planted in the ground, it’s absolutely essential to water and firm them in well. A 7.5cm-deep mulch of garden compost or well-rotted manure should be spread around each plant – this will help to feed the blackcurrants and keep down unwanted weed growth. At this stage, the main stems also need to be pruned to two buds from ground level (these buds should face outwards rather than inwards as that’s where you’ll want your fruit to appear). The reason for this is to channel the plants’ energies into establishing the root system in the soil and encouraging the production of lots of healthy new stems (from above and below ground) in the spring and summer. It’s these that will produce the first crop of fruits the following season.

New and established blackcurrant bushes must be kept wellwatered during long spells of dry spring and summer weather, and weed control is vital all year round. However, the plants have a wide-spreading, shallow root system and so using a spade, fork or hoe around them could mean you can damage it accidentally; a combination of hand weeding and mulching is less likely to cause damage.

For bumper crops, feed the bushes with an organic fertiliser (applied at a rate of approximately 100g per square yard) in the early spring and top-up the mulch of compost and manure around each plant every April. The plants can also be given a boost by applying an organic liquid fertiliser when the fruits are starting to swell in the summer.

In harsh winters, the roots (or rootballs) of new bushes can sometimes be lifted out of the ground by hard frosts. If this happens, firm them back in immediately. The flowers of some varieties (notably older types) are prone to cold damage and, if a frost is forecast while they are blooming, it is a good idea to carefully drape horticultural fleece over the bushes.

Unfortunately, currants are sometimes sought out by hungry birds and the developing and mature fruits may need protecting by covering with a sheet of fine netting. Alternatively, dangle old CDs from string nearby or hang thin strips of recycled tin foil from the stems – these will glint in the sunlight and rustle in the slightest breeze to frighten away any passing birds.

Blackcurrant fruits are ready for picking in the mid to late summer (July and August) and are at their best about seven days after they have turned blue-black. They can be gathered individually or, if you want them to stay fresh for a little longer, you can harvest them as whole trusses. If possible, pick the blackcurrants in dry conditions, as wet fruits often don’t store well and may turn mouldy. The fruits can be eaten immediately, or stored in a fridge for one to two weeks. Alternatively, they can be frozen for eating later – they should last at least six months this way. 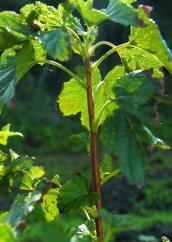 Annual pruning should begin two years after an autumn planting, as established blackcurrants produce by far the greatest part of their crop (and the best fruits) on the previous season’s stems. Regular cutting-back also prevents the plants becoming unkempt and overgrown, a state which would otherwise encourage pests and diseases to make inroads and also make harvesting difficult.

The ideal time to prune blackcurrants is between November and March as this is the plants’ dormant period. First, remove any dead, diseased or damaged stems, as well as those that are weak and spindly or crossing in centre of the plants. Next, cut back one-third of the oldest stems (these are usually thicker and darker in colour) to ground level, as this will leave enough room for healthy replacement stems to grow. When carrying out pruning work always use a pair of clean and sharp secateurs (or handheld loppers) and do not leave any snags on the stems, as they can be a likely point of infection for various diseases.

Afterwards, clear weeds from the area and surround the base of each bush with a thick mulch of garden compost.

Blackcurrants are very simple to propagate from hardwood cuttings taken in late autumn. Start by removing a young, vigorous and healthy blackcurrant stem that is about the thickness of a pencil. To create a 20–25cm long cutting, sever the stem horizontally just below a bud and then make a slightly-sloping cut just above a higher one. Choose a sheltered, partially-shaded spot with welldrained soil, make a narrow v-shaped trench with a spade and pour a shallow layer of horticultural sand in the bottom. Insert the flat end of the cutting into the sand and, if you have more than one cutting, they should be spaced 15cm apart. Backfill the trench with excavated soil, firm-in the cuttings and ensure the top two buds (at the sloping end) of each cutting are visible above the soil surface.

During the spring and summer, do not let the ground dry out, and remove all weeds that emerge nearby as these will compete with the blackcurrants for nutrients. The cuttings can be lifted and used as new rooted plants the following autumn. 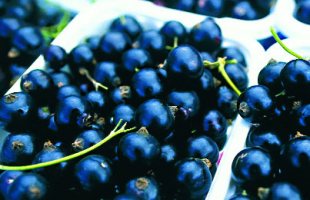