If you're only familiar with shop-bought beetroot, growing your own can be a minor revelation. You can eat them raw when young and tender, forgo spinach to steam their tasty leaves instead, and enjoy a selection of impressively-coloured roots from bright yellow to pink-and-white-striped

In years past, the odds of being served up a salad without a pile of pickled beetroot staining pink just about everything on the plate was remote (in the UK at least). More recently the general public – and notably the country’s top chefs – have come to realise what grow-your-own gardeners already knew: that it is a deliciously sweet and earthy vegetable in no need of such treatment. It’s not even necessary to extend a short shelf-life, as the roots will store for months in boxes of just-damp sand.

While the benefits of growing your own beetroot instead of buying it are ones you could extend to any garden-grown veg (better taste, far cheaper, personal satisfaction), it’s the number of varieties available to gardeners that most excites me. The traditional red colouring is down to a mixture of a purple pigment, betacyanin and a yellow one, betaxanthin. But in various combinations they give rise to white varieties such as ‘Albina Ice’, yellow beets such as ‘Burpees Golden’, and striped Chioggia varieties such as ‘Candy Stripe’, a spectacular rounded veg with pink-and-white-ringed flesh.

Growing beetroot also means you can pick over the delicious leaves (which will usually have been all-but removed by the time they make it to the shop floor). They are good to eat, both raw when young and cooked when older with a similar taste to spinach, one of its close relatives in the plant world. The foliage is usually red-veined and in the case of varieties such as ‘Bull’s Blood’ it’s completely red.

Beetroot grows best in a sunny, open position in light to medium earth. If the plot was manured for a previous crop, then no extra organic matter needs to be added – if it wasn’t, dig over the soil adding a small amount of compost.

Soil with a high clay content is less ideal: beetroot can struggle to form properly due to its denseness, and it can become over-saturated in wet spells and dry out too quickly in warm ones. But you can significantly improve your chances of getting a good crop of beets by incorporating a much more generous amount of compost into your bed than you ordinarily would. This will improve its structure, enabling it to hold moisture better in the summer and warm up quicker in the spring.

You should do this as far in advance of sowing as possible, to enable the organic matter to break down and become fully incorporated into the earth. Beetroot also prefers a neutral soil with a pH of between 6.5 and 7.5.

Each ‘seed’ you will find in the packet is in fact a pod that contains a number of actual seeds. That means each one is likely to produce two or more germinated seedlings (unless you specifically buy a ‘monogerm’ variety which has been bred to produce just one). With this in mind, sowings can be made thinly, with each seed pod spaced a set distance from the next.

Sow under cloches from mid-March for the earliest harvests – in ideal conditions these could follow in June, and you could be picking a few of the young leaves even before that. Bolt-resistant varieties such as ‘Boltardy’ and ‘Pronto’ are best for these barely-summer harvests – beetroots without that quality are likely to run to seed (‘bolt’) if temperatures fall below 0ºC, which is a distinct possibility in early spring. That’s because beetroots are biennial crops – putting their energy into producing a large storage organ in their first year in order to flower and set seed the next. The second stage is supposed to be triggered by the winter cold but as with other biennials such as carrots and leeks, low spring temperatures can cause it to happen as much as a year earlier.

Ideally the cloches should be in place and warming the soil a fortnight or more before sowing commences, and used to protect the developing plants at least until the end of April. Before you sow the seed pods, soak them in warm water for a couple of hours to wash off any chemical growth inhibitors that may have been used to preserve the seeds. Meanwhile use the end of a cane to make 2cmdeep seed drills in the soil, 25cm apart, and space each seed pod 5cm apart in them. Cover them over with soil and thoroughly water along the rows using a watering can fitted with a rose end – this will settle the earth in place. For a regular supply of tender roots and leaves you can keep sowing short rows at fortnightly intervals through to late June or early July. The final sowings of the year should be left to produce full-size roots that can be stored over winter.

Once the seedlings have surfaced, thin them to leave just the strongest where each seed pod was sown. When they have reached about 5cm in height they can then be thinned to their final spacings. This is one plant every 10cm for globe-type beetroot, or one every 15cm for the larger, long-rooted cylindrical types (see varieties to try box, right).

Seedlings may need protecting from birds, which will find the young leaves irresistible – pigeons are particularly prone to helping themselves to the foliage. If they are a problem in your area then place netting over the young crops. This can be removed once the plants are a bit bigger.

Sowing early on in the season will mean cold nights, conditions that can cause crops to ‘bolt’. To be on the safe side, use a bolt-resistant variety for early sowings such as the aptly-named ‘Boltardy’.

Beetroot are undemanding once the seeds have successfully germinated and the resulting seedlings have been thinned to their final spacings. Your main consideration should be that the plants are kept moist at all times, which means checking on the crop most days in hot, dry weather. Any that are allowed to dry out or that are watered in a haphazard way will tend to form woody roots, so be sure to give them a good soaking each time you water them. This will also hasten the time to harvest and produce bushier top growth for the tender, spinach-like bonus crop.

Weeds shouldn’t present too much of a problem thanks to the speed of beetroot growth, but larger ones are best removed to allow the plants to grow unhindered. Pests aren’t much of a worry either – only roots left in situ over winter for lifting as required (see box) are likely to suffer any real damage from slugs and snails. For that reason, from October onwards you should put cloches over any beetroot plants that are still in the ground.

The first swollen roots may be harvested once they reach the size of a golf ball, which can be as little as two months from sowing. They will be at their most tender at this early stage. Lift every other plant as needed so that the remainder can grow on to reach their full size – once they have, they can be lifted to use as needed but before they have reached about 7cm across, or the size of a tennis ball, otherwise they will start to become tough and woody. Don’t forget to eat the foliage too – steamed is best for a healthy shot of goodness.

To lift a beetroot, ease it out using a hand fork or trowel while firmly holding the foliage. Take care not to damage the root itself as it will be liable to ‘bleed’ some of its juices and therefore be unsuitable for storage.

Roots destined for winter storage should be at tennis ball size – anything smaller will start to shrivel too quickly once it’s out of the ground. Store them in boxes of just-damp sand in a cool, dark and dry place that is also well ventilated: a garage or frost-proof shed, for example. 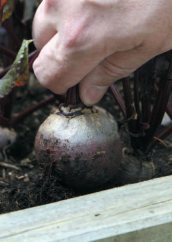 In many southern and western areas of Britain, winters are now mild enough to leave beetroot sitting in the ground throughout the colder months, for lifting as required. This does away with the need to store them in boxes of sand and the roots will be as fresh as possible when dug up from the soil. If you want to grow beetroots for overwintering this way then sow a maincrop variety in June or July into well-drained soil. Once the cold weather arrives, cover your crop to keep the ground from freezing solid around the roots. Either use horticultural fleece or, if slugs are particularly active, position cloches over the rows (though by winter the pests shouldn’t be much of a problem). This way you could be enjoying fresh, earthy roots and delicate, red-streaked greens in the depths of winter.

Gardeners with just a patio or balcony can still grow beetroot as they make great container crops. Choose a quick-growing variety that promises good baby beets for this – ‘Pronto’ is hard to fault. You will need a container or window box with ample drainage holes and that is at least 30cm in diameter. Fill it with multipurpose or grow bag compost to within an inch of the rim and firm down with your fingers. Then top it up again to bring the compost level close to the rim. Then simply push in the individual seed pods about 2cm down into the compost using your finger. They can be spaced quite thinly, leaving 6cm between each one. Once the seedlings come through and are each 2cm in height, thin them to leave 10–12cm between each plant. You can try closer final spacings of 8cm if you want to harvest the roots very young and tender. Keep the compost moist to ensure steady growth. 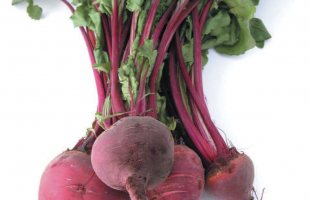