Ready to be seduced by the culinary crown-holder of the veg patch? Then now's the time to plant some asparagus for many years of tender spears to come

If there’s one vegetable that’s got the last word in culinary perfection it’s asparagus. Smooth, flavoursome spears (shoots) of unrivalled succulence are the name of the game here, making this the kitchen garden ingredient of any chef’s preference.

Its brief season of availability has given asparagus an almost legendary status and like the first sweet strawberries of summer, the moment that asparagus hits the shelves is eagerly anticipated. It seems that as soon as those tender spears appear the season is almost over. Maybe it’s this fleeting presence of awesome taste that has given asparagus cultivation something of an air of mystery. Yet with the correct ground preparation and the completion of a few simple annual tasks an enviable crop of spears will be yours every spring. Asparagus is one of a handful of perennial vegetables, sitting in the same ground for at least 10 years and often up to 20. It may seem expensive and time-consuming to start off with, but once plants are established you can expect a cut of 10 to 20 spears per plant for the rest of the plant’s life. Work that out over its 20-year life and you’ve got an awful lot of culinary ecstasy for the minimum of financial outlay and annual effort!

Modern, all-male F1 hybrids have done a lot to advance the attraction of asparagus to the home grower. These vigorous varieties give a solid performance, often cropping earlier and giving bigger yields over the season. Grow them in a bed of their own where they won’t be disturbed by the comings and goings of short-lived vegetables around them, or if space is at a premium set them in among the decorative border where the post-harvest feathery foliage will form the perfect backdrop to flowering ornamentals.

Meticulous ground preparation is essential if asparagus is to thrive. Remember that you are effectively laying the groundwork for two decades of growth, so time spent now will be repaid many times over in the years to come. There is little point rushing this job!

Asparagus prefers a free-draining but nutrient-rich soil that’s not too acidic. Aim for a pH of around 6.5-7.5, adding lime to the soil if yours is below this. Pick a position in full sun, free of frost pockets, where the plants can grow undisturbed and protected from strong winds. Some shade is tolerable but you will get a better performance when plants can draw on good, steady sunlight. Bear in mind that young trees and shrubs nearby may grow larger to eventually cast shade over your asparagus crop. Plants may be grown in any plot that satisfies the above requirements, but heavy clay that hasn’t been improved in the past may prove a challenge. Consider dedicating an entire raised bed to asparagus in these circumstances, when the extra depth of soil will make all the difference.

Prepare the ground the autumn or winter before planting by digging in ample well-rotted manure or garden compost – at least a bucketful per square metre. About a week prior to planting, rake in a general-purpose organic fertilizer, such as bonemeal to give the soil a final boost for your new introductions.

You can grow asparagus from seed or by planting rootstocks (usually one year old) called ‘crowns’. Growing from seed is cheaper than starting from crowns but you’ll have to wait another year before you can begin harvesting. Considering a bunch of supermarket asparagus costs as much as two ready-to-plant crowns, in most circumstances the latter option is well worth the investment.10 crowns costing about £15 should supply more than enough spears for the average family.

Crowns are generally planted in late March or April into prepared ground, though you can establish them in the autumn, too. Whether growing in raised beds or open ground, begin by digging out a trench 20cm deep and about 30cm wide. If your soil hasn’t been cultivated much in the past, an additional layer of compost or manure may be placed into the bottom of the trench then covered with a similar depth of soil to add more nutrients for the roots to grow into. Now add a line of compost along the bottom of your trench to create a raised mound. This will lift the buds of the crowns above the roots and help excess moisture to drain away from the delicate buds. Make sure that the roots are completely hydrated by soaking them in a bucket of water while you prepare the trench.

Set your crowns into the trench at least 30cm apart, straddling the roots either side of the raised mound, then fill back the soil so that the buds sit just beneath the surface. The trench can be filled in gradually during the growing season as the shoots grow, so that by autumn the level of soil in the trench will match that of the surrounding ground. If you intend to grow more than one trench then set these 45cm apart to give each row plenty of space.

Each spring, just before the crowns launch intro growth, apply a generous handful of organic fertilizer around the base of each plant to give it a boost. A further feed later on in the season may be applied after the cropping period to recharge the exhausted soil. Early shoots will need some protection from late freezes to keep them in good condition – be on hand with fleece if a frost threatens.

The spear cutting period runs from about early April to mid June, after which time the spears should be left to grow on to unfurl into the beautiful fern-like foliage. As this continues to grow you may need to protect it from wind damage. A simple perimeter of canes and string will keep the foliage propped up and safe from snapping. Although the mature foliage may seem of little consequence to the food grower it has a vital role, trapping the sun’s energy and channelling it back down to the crowns for next year’s crop. Protecting this foliage will safeguard future harvests.

If you simply can’t wait to make a harvest then a few spears may be taken in the second year following planting. Cut just one or two per crown and stop here. It may seem like a waste to allow the remaining shoots to go uncut, but the first few years are about establishing a healthy root system that will secure the plants for the future. Patience really will be rewarded, so bear with this establishment phase.

Of course, from the third year you can begin cutting in earnest. The first spears nudge through the ground from about early to mid April. Allow a cutting period of eight weeks from this point, taking the last cut in about mid June to let the foliage develop and recharge plants. Spears may be cut once they reach about 10-15cm high – leave them to grow longer and the outer skin becomes tough and will need peeling. To cut, insert a knife next to the spear and cut it off 5cm below ground level so you get some pure white stem with the spear. Any sharp, serrated blade will do the job but special asparagus knives will help as they are purpose-designed for the task, giving a good angle for a clean edge. Cut all the spears – thick and thin – because it is this harvest that stimulates new shoots to appear.

Of course, asparagus is best enjoyed as fresh as possible and will be bursting with flavour and nutrients at the point of harvest. If you want a bigger batch of spears then a previous cut may be kept in the fridge for up to a week while more are gathered. Stand the spears upright in 2cm of cold water before placing the whole container into the fridge. They will also freeze very well after being cut into sections and blanched in boiling water for a couple of minutes beforehand. This gives a great excuse for growing more crowns than might otherwise be enjoyed in the short cropping season – and who could ever tire of this decadent vegetable?! 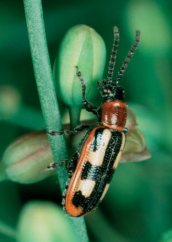 Few pests affect this crop but regular plant inspections will stop any in good time before they get a chance to inflict too much damage. Asparagus beetle (Crioceris asparagi) is specific to the crop and is easily identified. The mahogany-black beetles are just shy of a centimetre long and have bright, cream markings on their casings. The beetles and their grey grubs feed on the spears and foliage of plants, laying dark-coloured, cylindrical eggs on the shoot tips and stems. The adult beetles appear in spring as the spears first emerge, having overwintered in the leaf litter surrounding crowns or in the old hollow stems themselves.

Repeated feeding by the asparagus beetle will weaken plants, turning leaves yellow and sickly. A heavy infestation can knock back a plant so much it may never recover. If you spot the beetles or larvae early enough they can be picked off by hand. Heavy infestations will require treatment with a pyrethrum-based spray. Don’t let the beetles get established – inspect the emerging spears for eggs early on in the season and crush any you see. Remove old stems and debris from the asparagus bed in the autumn so there’s nowhere for the beetles to hide.

A notorious side effect of eating asparagus is the smelly odour it gives some diners’ urine. The smell can develop just half an hour after ingestion, turning the smell of your ‘eau de toilette’ into something akin to rotting cabbage or ammonia. While the experience is unpleasant, it is at least a fleeting phenomenon and completely harmless.

Only about a half of us experience smelly wee and it’s believed to come down to genetics. Asparagus contains various chemical compounds that, when completely broken down by certain digestive enzymes, release the distinctive smell. One of the chemicals released is methyl mercaptan, the same compound that skunks produce! Not all of us have the necessary digestive enzymes, which mean that for these people urine remains relatively benign in the odour department. Then again, those who can break down the chemical compounds can at least claim to extract more of the vegetable’s natural goodness – even if it does little for delicate constitutions! 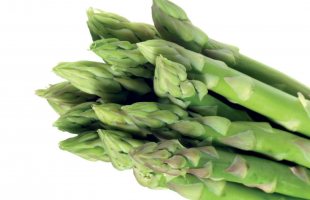