Few fruits can compete with the apricot for sheer indulgence, and with new varieties perfectly suited to the British climate there's never been a better time to grow them

Things are evolving in the fruit garden. Mild winters and sunnier summers are slowly changing what we grow, with new and previously coddled fruits increasingly able to stand on their own feet. Cue the apricot, a soft and succulent stone fruit whose time has finally arrived. It is not just our changing seasons that have helped this sun-loving tree – years of breeding in places such as New Zealand and the United States have yielded a new generation of hardier varieties that are ideally suited to our island conditions.

If you thought apricots were too fussy and not for you, now is the time to give them a second look. Cooler, northern gardeners can grow them as a fan against a south-facing wall that will soak up daytime heat to re-emit at night, while southern growers can try them as free-standing bushes for a crop of up to 500 fruits per plant! With Britain seeing its first commercial apricot orchard in Kent, and as improved, self-fertile varieties make growing them a doddle, the apricot has truly come of age.

While modern varieties are certainly easier to grow, apricots will always perform best when given the sunniest spot in the garden.

They need a freedraining soil that won’t become saturated in winter and will require a fairly deep soil to get their roots into. Remember that a tree will crop for at least a couple of decades, so pick your spot wisely. To prepare the ground, thoroughly dig it over and incorporate plenty of organic matter to give it a boost. If your soil is particularly heavy, mark out a trench where the tree is going to sit and add a layer of broken mortar or bricks to the base before covering with turfs and refilling with amended soil. Before planting, fork in some general-purpose fertilizer.

Free-standing trees require little further preparation but apricots grown as a fan will need a suitable support system. Prepare a south-facing wall or fence that’s at least 2m high and 4m wide to allow the branches to spread. Space horizontal wires at 15cm intervals on the wall, holding these in place with vine eyes.

The initial work involved in nurturing your apricot will be establishing a healthy branch framework. Any pruning is always completed during the growing season to limit the opportunity for disease to set in when the tree is sluggish in winter. It is also best to avoid pruning during very wet weather.

To train a bush, begin by cutting back the main stems by about a third, cutting to an outward-facing bud. This will encourage the tree to fill out. Do this initial pruning in mid spring. Thereafter, simply cut away any vertical stems that appear and remove branches that are crossing, rubbing or damaged, immediately after harvesting your apricots in July or August. Older branches can be removed from time to time to promote fresh growth. Fangrown trees are usually bought with two branches radiating out from a central stump. Tie in new stems as they grow to fill out the fan and cover the wall. Cut out (below ground level) any vertical suckers that emerge from the rootstock.

Apricots are as wonderfully easy to care for as they are delicious! Recently planted trees will need watering, at least for the first few years, during the summer. Fan-trained trees will always require watering in dry summers. To help them forge onwards to harvest time, top-dress the soil around each tree with a handful of general-purpose fertilizer in early spring before applying a thick mulch of organic material for the worms to turn in. If you have any comfrey, make a liquid feed from this and drench the soil throughout the growing season – apricots love it!

Most apricots flower exceptionally early compared to traditional tree fruits – it’s not uncommon for trees to be in blossom as early as February. This makes the flowers particularly vulnerable to frost, so be prepared to cover wall-trained trees with fleece should one be forecast. Despite apricots being self-fertile, they will benefit from a helping hand to guarantee pollination at a time when insect activity is sparse. Use a soft paint brush to tickle the centre of the flowers for this.

Unlike many tree fruits, apricots rarely require thinning as they develop. Should you feel that a tree is overcrowded with young fruits then carefully cut away the excess to leave an apricot every 8cm. Do this when they are the size of a hazelnut.

Fruits will be ready when they are slightly soft to the touch and come away easily from the tree – anytime between July and September. They are best eaten immediately as they will only keep for a matter of days, but if you are faced with the most agreeable prospect of an apricot glut they are very easy to dry for a nutritious snack (great for hill walkers) or can be turned into a tempting preserve. Even a young, three-year-old tree can be expected to yield up to 20 apricots, and as trees mature and fill out this number will only increase. The difference in taste that a home-grown apricot, plucked fresh from the tree, makes to the fruit garden is immense. Sweet, juicy and bursting with flavour – what an exceptional treat! 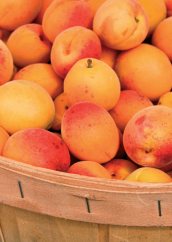 With their preference for deep, well-prepared soil there is some argument against growing apricots in containers, but with the right rootstock, a big enough container and a good planting medium you’ll have no problems. In fact, there are clear advantages to container growing – apricots can be moved around the garden to make the most of the sun and are easily covered in winter or brought into the greenhouse to protect them from rain splash (which can spread disease).

Select plants grown on a ‘St Julien A’ rootstock. Choose containers at least 50cm wide and add a layer of crocks or stones into the bottom to aid drainage. Use soil-based compost to plant your tree – John Innes No. 3 is just the ticket. Trees will rely on you for water and nutrients, so be on hand with the watering can. Begin feeding your plants once they set into growth, until their fruits swell. A high-potash liquid feed – tomato feed is perfect – applied every two weeks will keep them happy. Replace the top inch of soil every spring.

The odd fungal disease or insect pest is par for the course when growing fruit but, very occasionally, bacterial infections may appear.

For members of the Prunus genus, such as the apricot, this takes the form of bacterial canker, a serious disease that can ultimately cause leaves to wither and branches to die back. Symptoms appear in spring and summer – sunken areas on the stem blacken and exude a sickly, amber-coloured gum. Leaves become spattered with small, round brown spots, that eventually drop out of the leaf to create ‘shotholing’ of the foliage. As the infection spreads, whole branches can die.

Luckily it is easy to avoid bacterial canker by only pruning during late spring or summer when plants are in rapid growth and easily able to shrug off any onslaught. Pruning in summer will also help to avoid the other big disease of apricots, silver leaf. Should trees become infected by canker, cut back the diseased area to clean wood and discard the prunings. Paint the fresh cut with wound paint to seal the open surface from further infection. 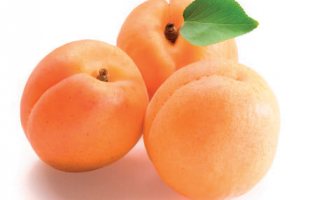