The top 6 gardens to visit this summer 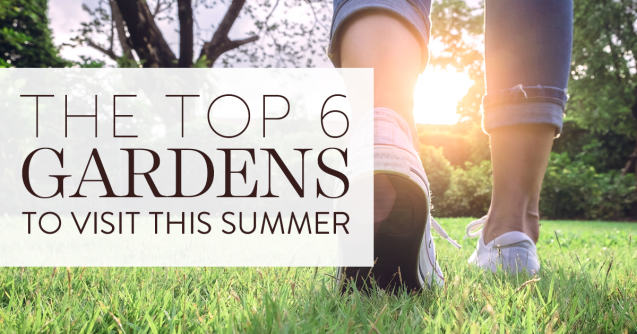 Struggling to think of which gardens to visit to make the most of summer? Take inspiration from our top picks below!

THE LOST GARDENS OF HELIGAN, CORNWALL

Lovers of Frances Hodgson Burnett’s The Secret Garden will feel right at home at one of the most mysterious and romantic estates in England. As the seat of the Tremayne family for almost half a millennium, Heligan was at its peak, but when the workforce left to fight in the First World War and never returned, the estate was buried beneath brambles for 75 years. Finally, in 1990, the secret gardens were discovered by Tim Smit and John Willis, and Heligan was reborn, being restored in a project dubbed by The Times as the “garden restoration of the century”. The estate was cleared to reveal the finest Victorian productive gardens in England where now over 300 heritage varieties of fruit, vegetables, salad and herbs are grown and supplied to the kitchen. Whilst you’re there, make sure to check out the impressive kitchen garden, as well as the walled flower garden and the melon yard, to observe the traditional growing methods and the exotic glasshouse fruits that take place and grow there. What’s more, Heligan is also home to some 200-year-old pleasure grounds which sport stunning structures, eye-catching features and historic plantings, including the National Collection of ‘Camellias and Rhododendrons Introduced to Heligan pre-1920’, plus Cornwall’s only outdoor jungle garden that has one of the longest Burmese rope bridges in England – perfect for keeping the younger ones entertained!

Arguably more famous for its building once being the home of the Bloomsbury group than the garden, Charleston also has an outstanding outdoor space that mixes Mediterranean influences with cottage garden planting. After the First World War, Vanessa and Duncan Bell over-hauled the traditional vegetable plots and hen runs to create an artists’ paradise, to feature a rectangular lawn, a pool, bright flower beds, paths and a tiled piazza. Even though the garden isn’t well-known for its fruits and veggies, visitors will be treated to a delightful display of mosaic pavements, artworks and sculptures, including the Cast of Venus, the wall heads and the levitating lady. It’s a great example of how colour and texture can bring new life to an outdoor space. After your trip, make sure to take a stroll over the South Downs. You’ll be glad you did.

This list wouldn’t be complete without mentioning the most famous garden in the world – the Royal Botanic Gardens, Kew. This UNESCO World Heritage Site is home to a 50,000 living plant collection spread out across an awe-inspiring landscape and inside historical buildings, from the Palm House that specialises in tropical plants from some of the most threatened environments in the world, to the Prince of Wales Conservatory that acts as a journey from the desserts to the tropics. Thrill seeker? Take a trip on the treetop walkway that towers 18 metres above the ground or dare yourself to get lost amongst Kew’s 37 acres of classic woodland or loose time admiring their collection of 14,000 trees.

What the Beth Chatto Gardens lacks in size (it’s just 15 acres) it makes up for in wow factor. Split into five areas of equal beauty - the gravel garden, the scree garden, the water garden, the woodland garden and the reservoir garden – Beth Chatto is famous for its spectacular display of drought-tolerant plants, overgrown alpines that emulate the growing conditions of stony, mountainous slopes, as well as a serene pond plant area. With as much packed in as possible, it’s also easy to get first-hand inspiration, as all the plants on display are for sale.

There’s something special about Rosemoor, as the former farm turned RHS has retained the feeling of a dwelling place yet is nevertheless mixed with more formal and expert plantings. The house and garden was once home to Lady Anne Palmer who, after gaining an interest in gardening after catching the measles, travelled to South America, Papua New Guinea, New Zealand, the USA and Japan, to develop her plant collection which has led to diversity among the 4,000 plants in Lady Anne’s garden. Now split into two distinct areas, the original, more informal, and the new, freshly planted formal garden, Rosemoor has become famous for its traditional and modern rose gardens.

A garden on an epic-scale, Chatsworth house boasts 105 acres of perfectly mowed grass, a yew maze, a rockery, a rose, cottage and kitchen garden, as well as famous waterworks, rare trees, shrubs, streams and ponds. There’s so many features to this epic garden that it’s hard to list them all but be rest assured you’ll discover much more on the hidden gems trail.

Visited one of these gardens or think we’ve missed one? Tag us in your posts on Facebook, Twitter and Instagram to show off your favourite green spots.