The Complete Guide To No-waste Growing 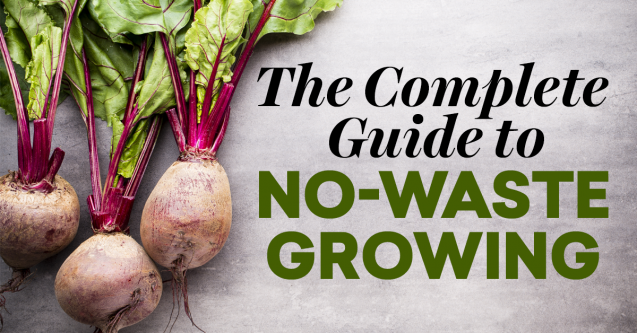 Make the most of your harvests with the help of this useful advice!

If you’re growing lots of different fruit and veg, it’s quite likely that your compost heap will be brimming with the addition of spent crops this month. Whilst this process is incredibly useful for next season and will give your plot a nutritious boost, it would be a shame to miss out on parts of your plants that could have been eaten and enjoyed. Some crops offer an obvious edible bounty, but many have much more potential in the kitchen than what springs to mind. By recognising this you’ll maximise your harvests and never be short of tasty, home-grown produce. Plus, when it comes to disposing of what’s left, you will know you couldn’t possibly have eaten anything else.

What You Can Eat
Beetroot – the green tops taste great when cooked over a gentle heat with butter. They have a similar texture to spinach and can be used in the same way.
Radishes – these little bulbs can be deceivingly tricky for growers who struggle with temperamental weather conditions. If your crops run to seed, don’t be tempted to banish them to the compost heap! Your bolted plants will soon produce tiny pods that gardeners in-the-know consider to be a great delicacy. The tops of radishes are also edible, and have a peppery bite that resembles a milder version of the mature roots.
Sweet potatoes – the leaves and vines from this starchy veg make a great addition to stir fries and other examples of Asian cuisine.
Broccoli – make your pickings go further by using the delicious foliage – it has a very similar taste to the floret and is great for beefing up a vegetarian lasagne.
Carrots – don’t assume that only the roots are good for eating. While feathery tops resemble the foliage of deadly nightshade, they can in fact be used as a subtle garnish for soups and salads.
Pumpkins and squash – these bulky cucurbits have a wide range of uses. Whilst the fruit is traditionally eaten, don’t forget to save the greens, which can be used in an array of dishes, and the seeds – which can be roasted for a tasty snack.
Watermelons – the sweet, juicy flesh of this fruit isn’t the only treat you can enjoy. Try pickling the rinds or including them in chutneys for an alternative flavour. This is a fantastic way of being more resourceful.
Parsley root – this particular type of herb produces bulky roots that can be used in the same way as carrots and parsnips. With a flavour that can be likened to celeriac, you can also still enjoy the edible leaves in the same way as common varieties. Why not give ‘Atika’ a try for another tasty crop?
Grapes – while we’re all familiar with the sweet little fruits that are produced by these vines, you can maximise the benefits by including them, along with the stems in juices. This part of the plant isn’t normally edible, but blending allows you to get even more from your pickings.

Get Composting
When you’ve finally used all you can from your crops, it’s important to bear in mind what is suitable for your compost heap, and know how to dispose of it accordingly. Most plant waste that cannot be eaten, including roots, stems and certain flowers can be added, but remember vegetables can only be used if they are raw. Any edibles that have suffered from a disease such as blight could potentially infect the rest of your compost, so it’s best to eliminate the risk. As autumn approaches, it’s time to create a bonfire to dispose of any unusable excess – choose a still day to stop smoke travelling too far and potentially upsetting your neighbours. You’ll also need to gain permission from your local authority if you’re starting one on a community allotment. It is best to prepare the bonfire on the day of use so that wildlife doesn’t have a chance to shelter in the debris – check for hedgehogs and amphibians before lighting.

Be Prepared For Next Year
Whilst many gardeners revel in the glory of their overflowing trugs at the start of the season, come October these gluts may start to lose their appeal. A common cause of this is simply having too many edibles to make use of. While it’s still fresh in your mind, make a note of everything you’ve grown this year, including variety names and how many you had of each. If, for example, you’ve been drowning in tomatoes, make a note to grow less next season, or pick a variety that doesn’t produce such high yields – this knowledge will put you in good stead when it comes to ordering seeds. Don’t worry if you find you’ve not planted enough, as there are plenty of fast-maturing veg such as lettuce and radishes to fill the gap.

How to introduce your child to farming and growing