How to harvest fruits and vegetables 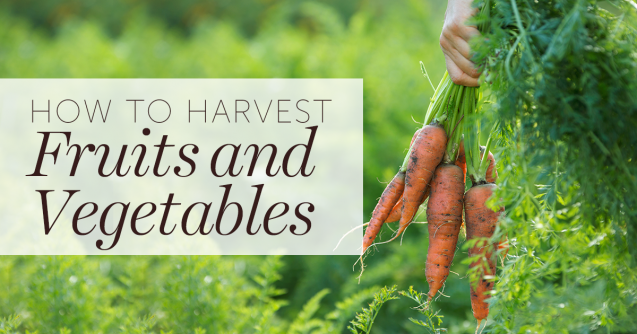 When the time comes around, harvesting your fresh fruit and vegetables is one of, if not the best, thing about growing your own. It’s not just the phenomenal taste of homegrown produce that makes this so, but also that after weeks and months of preparing the ground, sowing the seed, and watching your precious plants grow at the same time as making sure they don’t die off, you’re finally rewarded with the (literal) fruits of your labour. It’s easy, however, to get excited over the amount that there is to pick and to jump straight into the harvesting process without giving much thought to how, or when, you’re going to do it.

On the face of it, it’s still true that it involves waiting until a tomato, or a cucumber, is ripe, before picking and eating it, but there are some common pitfalls that even an experienced grower can fall into that can damage the overall quality of your crop. For example, picking fruits and vegetables either too early or too late, leaving produce on the plant for longer than is necessary, failing to spot potential problems, and even doing something as simple as gathering your goods at the wrong time of day can all contribute to a less-than-average-harvest. To avoid this and to get the best out of your best crop, follow our simple guide.

1. Pick fruit and vegetables as soon as they are ripe, not before or after as this is when they’re at their best. It’s a good idea to take a trug down to the garden each day so you’ve got it to hand when things are ready. Another reason for this is that the more you harvest, the more your plant will produce.

2. Don’t allow fruit to remain on the plant, even if it’s grown too big and can no longer be eaten. The hard fruits that have refused to ripen on your fig tree will need to be removed otherwise these will help to drain the plant’s energy.

3. Bigger does not always mean better, unless you’re growing giant veg for show. In fact, it’s usually better to pick often and small rather than waiting until the produce is huge – regardless of how impressive it looks! This is because most fruit and vegetables are at their optimal taste when they are relatively small. If you wait until the crop is big, it will be tough, bitter and could even have a disease so it is therefore not something you’d be proud to serve at the kitchen table.

4. Check for potential problems when you pick, such as black spots, yellow leaves, white patches and rotting fruit. The causes of these can include bacterial speck, clubroot, mildew and blossom end rot. Most of the time, these diseases can be cured with chemicals but it’s best to remove the affected parts as soon as you see them to stop the disease spreading. Even if it’s a weather-related problem that you can do little about, there’s no point in letting the plant put energy into producing fruit that’s not going to get eaten.

5. For the majority of the time, harvest when plants are dry, as water can spread fungal diseases, such as damping off disease. A few crops, such as potatoes and other root veg, prefer however not to be dug up in extremely dry weather, as there’s a chance the compressed soil can cause the root to snap. It’s therefore better to water the ground beforehand, especially during a drought.

6. Gather up your goodies in the morning or at night, not at noon. As a rule, fruit and veg is better hydrated earlier in the day as there’s a lot more moisture in the air (think dew). To make the most of this, pick salads in the morning for the most succulent and tender leaves. If you can’t get down to your allotment at the crack of dawn, ensure that harvesting is the last job you do. You won’t want to eat a courgette that’s been sweltering in the car all day.

7. Fruits such as apples and pears are ripe when they come away from the tree with a sharp snap, and with the stalk intact. The best way to do this is to cup the fruit in the palm of your hand and twist it upwards. Cupping the fruit, instead of holding it with your fingers, minimises the chance of bruising. Stone fruits such as peaches, plums and nectarines can be picked with the skin is soft at the stalk end.

8. Let colour guide you when you’re picking peppers and tomatoes. Look for a good solid colour over the entire fruit and a healthy shine. Just like apples and pears, you’ll also know that tomatoes are ripe when the stalk snaps easily. It’s also possible to pick underripe tomatoes and leave them on a sunny windowsill. This is particularly useful at the end of the season or during cloudy weather.

9. Use a sharp pair of scissors or a knife when harvesting most fruits and vegetables. This prevents the plant from tearing which can damage new growth, cause the plant to rot, and the tugging can even dislodge it from the ground. This is especially important for plants that need a decent amount of stalk to remain on the plant, such as gourds. Failing to do so compromises the seal, causing the the fruit to rot much faster than it normally would.

How to introduce your child to farming and growing