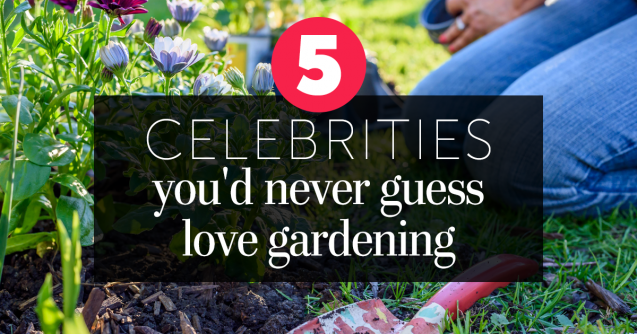 Take a break from the plot and discover which celebs love to get stuck in to gardening, too.

Queen of talk shows, queen of the media… and now queen of gardening! It wasn’t long before it came to the attention of the internet that Oprah loves her garden and the internet loved (and still loves) Oprah for it. On a beautiful sunny day last year, Oprah posted a photo of herself cradling an absolutely enormous basket of veggies, stuffed to the brim with beans, lettuces, tomatoes, kale and chard, all carefully arranged into individual pots – our arms ached just from looking at it! Oprah, showing off her harvest in a pair of sunglasses and confirming she is as cool as ever, captioned her picture with “I still can’t believe how much bounty you get from a few seedlings. Anyone else growing tomatoes? Mine are poppin’ right now!” We agree, Oprah, your tomatoes really are poppin’.

I still can’t believe how much bounty you get from a few seedlings. Anyone else growing tomatoes? Mine are poppin’ right now! #harvestday

If you’re clued up on politics then you might already have guessed this one, but the former First Lady of the United States has been on the front line of spreading the positive benefits of growing your own food stuff since 2009. One of Michelle’s first enterprises in office was to plant a giant 1,700 square feet veg patch on the south lawn of the White House where she started growing up to 50 varieties of fruit and vegetables. Michelle used her garden to promote her Lets Move! Campaign which aimed to get kids fitter, fight childhood obesity, and improve the nutritional quality of school dinners. Local school children were often invited to the veg patch to help Michelle sow, plant and harvest healthy crops – we miss you Michelle!

Excited to see Bruktawit today! We harvested sweet potatoes together at the WH, and I’m so proud she’s still dreaming big. @CapitalCityPCS

It’s undeniable that Julia Roberts is well-known for her on-screen performances in Pretty Woman, My Best Friend’s Wedding and Notting Hill, but she is perhaps not as well-known for her love of gardening. In 2008, Roberts bought and set up a solar-powered farm in Malibu, California and soon started planting up carrots, beans and lettuces after becoming interested in sustainable living. In several interviews where Julia delves into the topic, she expresses her passion for organic gardening and says that through sowing, harvesting and cooking healthy crops she can teach her children where their food comes from. We salute you, Julia!

Jake Gyllenhaal has been helping out with several gardening charities since the early-2000s which includes partnering with the Edible Schoolyard Project - a campaign set up to spread the idea that learning how to grow fruit and veg is a valuable resource for kids and more gardens should be set up in schools. Jake has also spoken about his interest in recycling and how he spends $400 a year helping to preserve the Mozambique forest. We really hope that Jake starts posting photos of himself in his garden soon.

We wrapped up the 2017 #esyintensive training today. Thank you to our partners and participants for a full and inspiring three days!

You wouldn’t expect the world famous rapper to be interested in growing his own fruit and veg, but think again – Snoop Dogg loves gardening and the thing he loves most about it is giant veg. Back in 2013, in perhaps one of the most unexpected celebrity encounters, a gentleman named Ian Neale, who had just broke his own Guinness World Record after growing the world’s heaviest swede, received a call from the music star congratulating him on his brilliant achievement. In a YouTube video a few years before, Snoop Dogg had even invited Mr. Neale to one of his shows to demonstrate how he grows his own veg. Below is a photo of Ian tending to a pepper he’d just grown which weighed an incredible 720 grams, and winning the title of the world’s largest bell pepper.