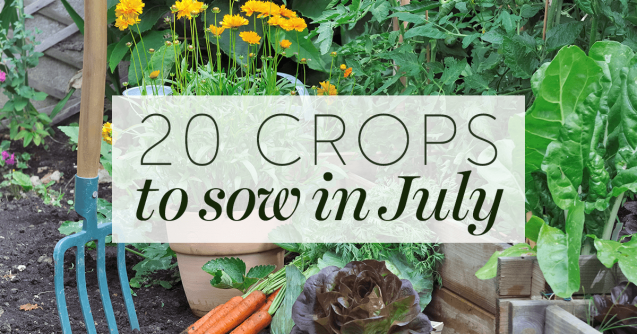 July is a month of barbecues and bountiful harvests. New crops are ripening every day to leave our kitchen tables wobbling under their weight. Autumn can be just as abundant. Sow these 20 veg this summer to keep your cupboards packed with food.

1 Cauliflower ‘All The Year Round’ The clue’s in the name! This variety produces tight white heads over a long period. Sow seeds for tasty autumn curds. This veg can be sown in autumn, too. Start the seeds off during October under cover for an extra-early harvest next year.

3 Spinach beet ‘Perpetual Spinach’ Fed up with your spinach bolting? Here’s an easy alternative. Warm summer sun shouldn’t cause these perpetual types to flower. Just keep the young crops well watered. The plants grow faster in warm weather, but that won’t stop you enjoying a crop when the weather begins to cool. Simply pop a cloche over late sowings if temperatures start to dip.

4 Turnip ‘Purple Top Milan’  These compact turnips can be grown as a catch crops in between your slow-maturing veg. Start them off until the end of July – you could be lifting the first crops in as little as six to 10 weeks. Harvest the speedy growers as ‘baby turnips’ when they reach golf ball size or leave them to grow on for larger, cream-coloured roots. This variety is one of the free seeds included in this issue (digital copies excluded), turn to page 59 for further growing guidance.

5 Sorrel ‘Red Veined’  This must-have leaf can be thrown into stir-fries or picked young for use in salads. Make regular sowings until late September, in rows around 30cm apart. Pick a few leaves at a time and leave the plants to re-grow for cut-and-come-again crops. Eat sparingly – the taste packs a punch and the foliage is high in oxalic acid.

6 Cabbage  ‘Greyhound’ Forget over-boiled childhood dinners – this variety will have you hailing cabbages as a gourmet veg. Sow over the next few weeks then pick young plants for leafy greens. If you have any seeds left, keep a few for next spring. They’ll give you summer harvests of flavoursome, pointed heads.

7 Spring onions  Crisp, crunchy and oh-so easy to grow. Sow popular spring onion ‘White Lisbon’ every few weeks until late September for regular pickings into autumn. The plants can take as little as six to eight weeks to mature. Just keep weed-free to ensure they bulk up well.

8 Radishes There’s a world of radish-related colour and flavour to try, even this late in the year. A summer classic such as ‘French Breakfast’ can be sown now for harvests in just a few weeks. Winter types are bigger and slower growing. For a crop with a bit of a kick, try ‘China Rose’ – a rosy-skinned root with white flesh and edible leaves.

9 Dwarf beans  When you’re looking for a fast-growing crop, one called ‘Speedy’ is a good bet. This dwarf French bean can be sown now for quick crops before the colder weather arrives. If you can’t get hold of the seeds, search for other varieties that promise swift results. You’ll be harvesting pods in autumn.

10 Swiss chard Mature Swiss chard leaves need to be cooked before they’re eaten but baby leaves can be steamed or just eaten raw. Sow ‘Bright Lights’ and other colourfully-stemmed varieties now and soon you’ll be throwing the greens into autumn salads.

11 Mizuna and mibuna These tasty Oriental greens can be sown in the second half of summer. They cope well with cool, dry conditions (keep them well watered in hot, dry weather as plants may run the risk of bolting). Treat them as a cut-and-come-again crop – take a few leaves from each plant, and more will re-grow.

12 Lettuce Here’s your chance to enjoy lettuce all year round. Keep sowing your remaining seeds every couple of weeks for ongoing summer and autumn crops. Winter varieties such as ‘Valdor’ and ‘Arctic King’ can also started off next month for early pickings next year – use a greenhouse for the best results.

13 Beetroot There aren’t many treats better than tender beetroot, harvested at golf-ball size. Keep an eye on your summer-sown crops. They’ll need watering in warm weather to keep the roots from turning woody.

14 Kale This crop copes well with chilly winter weather, but if you don’t fancy large, mature leaves sow now for baby-sized foliage. Cut it at around 5-6cm high and the plant will produce another batch for a second harvest.

15 Parsley If you don’t already have parsley growing in pots, sow now to keep in containers. Position them inside on a sunny windowsill to stretch out the harvest period. You’ll still be picking fresh leaves in autumn and early winter.

17 Pak choi Sow today and you could be harvesting pak choi leaves in just 30 days (or wait a further couple of weeks for mature, hearted plants). Water the crops in warm weather to avoid bolting.

18 Florence fennel Florence fennel is grown for its swollen base, though the leaves can be used as seasoning. Changing day lengths or dry soil may trigger bolting so sow after mid-summer and keep soil moist. Earth up the stems for tasty, sweet, blanched bulbs.

19 Carrots Chances are, you’ve been sowing these seeds ever since early spring. For a final batch, choose a fast-growing variety that will produce roots within eight weeks, before the first frosts set in. For crops that will stand into winter, opt for a hardier, slower growing type like ‘Autumn King’.

20 Potatoes Order second cropping tubers from seed catalogues and you’ll be able to plant fast-growing varieties in sacks during August. Leave them in a greenhouse during colder months for autumn harvests that can be enjoyed during December’s celebrations.