Its odd-looking shape and little-known standing in the kitchen has put kohlrabi in the shade. Yet gardeners who give this brassica a try are in for a surprise!

Of all the many wonderful vegetables to grow, kohlrabi takes the crown for the most bizarre-looking. Its swollen, bulb-like stem sprouts waxy leaf stalks, giving it an alien, out-of-this-world appearance. With varieties available in dusky pale-green or purple, these eccentric members of the brassica family are sure to raise an eyebrow among those unfamiliar with this versatile crop.

Both the leaves and swollen stem of the kohlrabi are edible and with harvests ready to pick from just 10 weeks after sowing, this is one overlooked crop that deserves wider recognition. Its sweet, nutty taste melds with flavours of turnip and celery, making it perfect for boiling, steaming or grating raw into salads. Its speedy, easy-to-grow nature means it’s the perfect catch crop. Fit a few rows between longer-to-establish brassicas such as kale or Brussels sprouts. The very first sowings of this veg can be made under cover as early as March, with the final sowings for a winter crop of stems occurring from August right up until the beginning of September.

Like all brassicas, kohlrabi thrives in soil that is free-draining but moistureretentive. It prefers full sun and copes well with heat, but will also give an acceptable result in dappled shade. As it doesn’t grow as big as other brassicas, such as cauliflower, it can be kept in slightly shallower soil, which makes it a good choice for raised beds or even containers. You will, however, need a veg patch that is at least pH 6.0 – if your soil is very acidic apply lime to the ground a few weeks before sowing, or grow your kohlrabi in pots of compost.

Prepare the soil by digging in plenty of well-rotted organic matter. Just before sowing rake in some general-purpose fertilizer, such as blood, fish and bone, or chicken manure pellets. To avoid any disease problems, never follow kohlrabi on from other brassicas. If you are starting your crop off early in spring then set cloches into place a week before sowing to begin warming up the soil.

It’s likely that if you’ve never tried this delicious vegetable before, you’ll want to come back for more. Luckily its quick growth makes it suitable for sowing every three to four weeks to maintain a regular supply of stems from late spring through to midwinter.

To begin, rake the soil down to a fine tilth and pull to the side any remaining lumps or large stones. Kohlrabi is best sown ‘direct’: mark out drills 1cm deep and space them 30cm apart to give the plants plenty of room to expand. Sow seeds very thinly along the bottom and cover them back over with soil. Water along the row after sowing to thoroughly wet the ground.

For a late crop of miniature veg you can place seeds much closer together, leaving just 15- 20cm between rows to enjoy baby kohlrabi up to the size of a golf ball. Make these sowings at least four weeks before the first expected frost – up to mid-September in the south.

Early sowings made in March will need to be protected from the cooler conditions using a cloche. Remove the coverings once the weather improves and night frosts become less frequent. Once the seedlings have their first set of adult leaves thinning can begin in stages – at first to leave about 5cm between each plant and then to a final spacing of 15cm. Crops grown for miniature veg have an ultimate spacing of just 3-5cm in the row. Don’t compost the thinnings – the first ones make an unusual salad leaf, while the final batch can be steamed whole.

Weeding is important, particularly during the earlier stages when seedlings can quickly become swamped by rambunctious plants. Take a little time each week to pull out any weeds by hand, avoiding accidental damage to your young crops. A layer of organic mulch between rows will help to suppress weeds, while maintaining a moist, well-structured soil. If pigeons (the most common nuisance) are a problem, you’ll need to cover your charges with some netting until they grow on a bit. Any damaged seedlings can easily be re-sown.

Kohlrabi is pretty easy to grow and is less prone to pests and diseases than some other brassicas. Although plants cope well with heat, allowing the soil to dry out will only result in tougher, woodier stems, so water the crop in dry weather to keep them tender but strong.

If your soil is particularly poor, plants will appreciate a top dressing of fertilizer halfway to harvest – either the same one you used just before sowing time, or a liquid feed such as comfrey or nettle tea. Lightly tickle this into the surface with a hand fork or drench the ground with the feed.

Sowings made at the end of summer will be ready by autumn but will happily stand through the first half of winter. If plants aren’t quite fully grown by mid-October you can speed things along by setting cloches over the crop to keep conditions that little bit warmer and soil from becoming saturated by persistent autumn rain. Purple varieties tend to be hardier, so perform better later in the year.

The earliest kohlrabi will be ready from May, with the final sowings made in September ready for lifting in late October and into December. Like many similar veg there’s a balance to be met between flavour, texture and size. Leave your kohlrabi to grow too big and the stems quickly become woody and hot to taste. Begin pulling up plants when the stems reach the diameter of a golf ball but allow the majority of the crop to grow on. Tennis ball-size is the largest you should allow them to swell, although the amusingly-named ‘Superschmelz’ can grow to monster proportions without its quality deteriorating.

Although kohlrabi is hardy, in particularly cold spots it is better to lift a late-autumn crop of plants before they get consistently clobbered by harsh frosts – simply trim off the roots and foliage and store the stems in a cool, dry place that’s well ventilated. Stems may also be frozen by chopping them up into smaller segments, blanching in boiling water for three minutes then freezing after cooling them off quickly in icy water and patting dry. 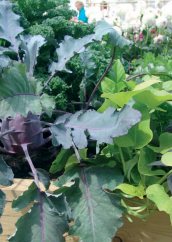 What do kohlrabi, cabbage, Brussels sprouts, kale, cauliflower and broccoli have in common? Quite a lot as it turns out, as they’re all the same species of brassica – Brassica oleracea. All six vegetables are bred from the same wild cabbages that fringe the Atlantic coasts of Europe and the Mediterranean basin. Each brassica has been selectively bred over time to accentuate a particular trait. Cabbage, for example, has been chosen for its large terminal bud, Brussels sprouts for numerous lateral buds and broccoli for enlarged flowering structures. Kohlrabi has been bred to develop a swollen stem, giving it its nearspherical shape.

To distinguish kohlrabi from other crops of the same species, it has been given the suffix ‘Gongylodes Group’ (cabbage, for example, is in the Capitata Group and broccoli in the Italica Group). Its common name, meanwhile, offers a description of its appearance. Kohl is the German for ‘cabbage’, while rabi is a Swiss German variant of ‘rübe’, meaning ‘turnips’, which it closely resembles.

The challenge presented by a relatively under-used vegetable such as kohlrabi is knowing what to do with it in the kitchen. While it’s great fun growing this alien-looking crop, all that effort will have come to nothing if it isn’t used correctly! Both the swollen stem and leaves are edible and can be used raw in salads or cooked. The stems have a taste similar to turnips but with a subtle hint of celery.

Prepare your kohlrabi by cutting away the leaves and roots and then peeling off the outer layer to reveal the tender flesh beneath. To enjoy in a salad, simply grate the stem and mix with salad leaves and a dressing. To cook, slice it up into 1cm strips and boil in a little water for 10 minutes, adding a curl of butter just before serving. Use smaller bulbs, up to about 5cm in diameter for eating raw, and larger bulbs to tennis ball-size for cooking. The young leaves can be harvested for enjoying as a delicious and healthy steamed vegetable. 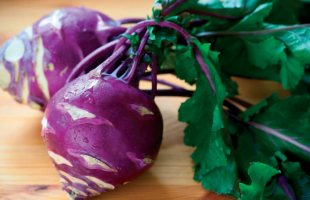